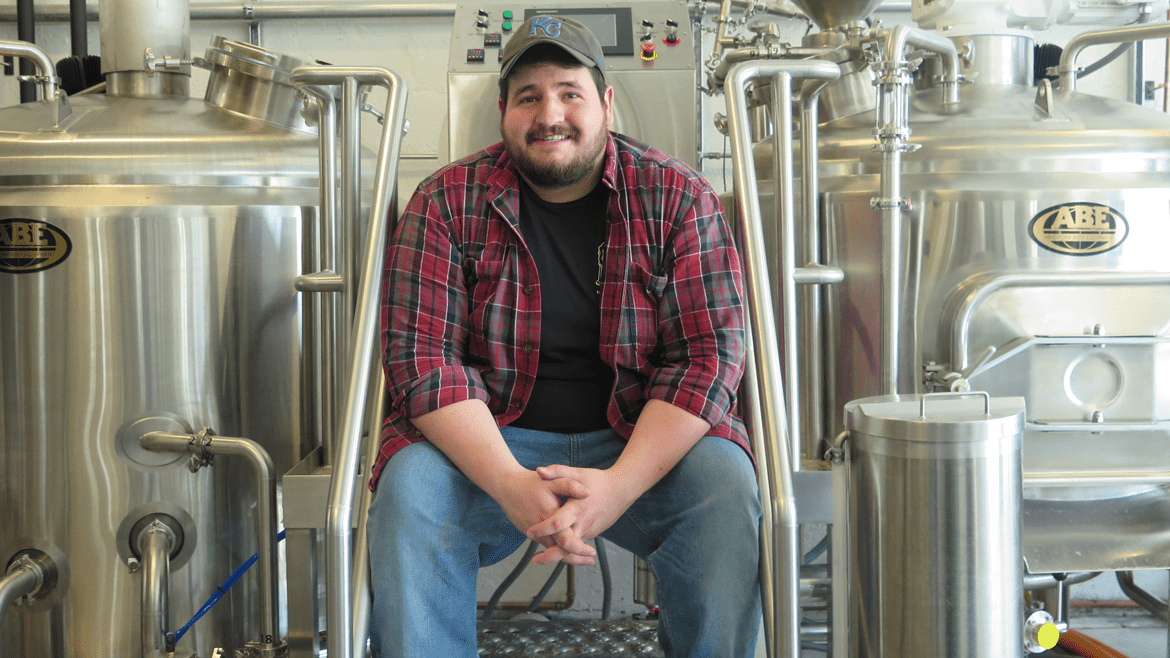 A native of Kearney, Missouri, Winnie earned his brewing credentials at the University of the Sciences in Philadelphia and interned at a brewery in Baltimore, Maryland. Winnie connected with Wilkerson after moved back to his hometown. He soon found himself in the plum position of running a new brewery, a rare opportunity in a town located 40 minutes north of Kansas City.

“I’m not trying to reinvent the style wheel of beers,” Winnie said. “I want to do the wheel well.”

The brewery’s name springs from the city’s once-renowned reputation for its mineral waters. In the early 1900s, Excelsior Springs was a destination known for its nearly four-dozen mineral water springs and varieties of waters that reputedly had healing properties. City leaders branded the city as America’s Haven of Health. Thousands of people with illnesses flocked to the city’s mineral water pavilions and bath houses. By the mid-1900s, newspaper articles began questioning the medical veracity of the mineral waters associated with healing properties. Eventually, the local economy took a downturn as the tourist and mineral water industry dried up.

Already staking its own claim, Dubious Claims Brewing declared itself the number one brewing company in Excelsior Springs. Meanwhile, a one-barrel nanobrewery is in the works at nearby saloon The Atlas. Hops, the essential ingredient in beer that provides bitterness, flavor and aroma, grow on vines as hop flowers or cones. Hop farms harvest, process, and sell cones to breweries as whole hops or compressed pellets. Hop dust is created by cryogenically freezing hop cones. The leaves and vegetal matter can be more easily separated from lupulin, the powder containing oils and compounds that produce the desired flavors and aroma in beer.

The goal of brewers is to minimize the vegetal characteristics and maximize the lupulin in beer for prime flavor and aroma. Dry hop pellets are the most common usage of hops in brewing.

“Hop pellets are easy to measure and use with a high concentration of lupulin oil,” Powers said. “It provides maximum aroma and the juiciness and resin for the best result.”

A hops producer used a new innovative freezing process with some of the most recent hops crop. Breweries such as Zipline and Boulevard have experimented with the ingredient.

“This is the first year we’ve played around with hop dust,” Powers said. “For hops processed in early 2018, this is the first wave of the technology applied to brewing. I’m seeing a string of innovation in the market with new beers using hop dust.”

Zipline has experimented with using a combination of hop dust and hop pellets to strike a balance in flavor and aroma. Boulevard Brewing has also worked with hop dust. However, the cost of the ingredient makes it impractical to use at scale compared to hop pellets.

“We’ve looked into it and will not use hop dust in the future,” Boulevard brewmaster Steven Pauwels said. “It’s an oil yield issue. Hop dust has a high processing cost that doesn’t make sense for us. We also have good technology, such as centrifuges, to use with hop pellets. The flavor from hop dust isn’t much different than hop pellets.”

Pauwels said he does like the limited-release beers that Boulevard and Zipline produced with hop dust.

“We worked with the guys from Zipline and helped them with brewing the beers,” Pauwels said. “It helped to understand their approach to using hop dust. As a younger brewery, Zipline looked to Boulevard’s approach to making a good balanced beer. We had the same ideas.” “Light and dry, this mead is made with wildflower honey from our friends at Cooper’s Honey Farm,” brewer Will Reece said. “It is a hit with those customers that need something gluten-free or prefer wine over beer. Our first cider test batch is in the fermenter but probably won’t be ready until late May.”

The taproom will also have a slushie machine, starting May 5, that uses mead as a base for drinks. Border Brewing (406 E. 18th St.) brings back this year’s version of Trapdoor Tripel on draft and in 22-ounce bottles. The beer was inspired by a homebrewed bottle of Belgian Tripel and recipe that assistant brewer Kelly Wing found in his basement. Belgian candy sugar not only boosted the alcohol, but also lightened the body of the beer. It’s made with two different yeast strains, and aged for a month after fermentation. Look for big banana and clove flavors with a clean, dry finish.

“We chose Vic Secret for this batch to round out the more intense pine and citrus qualities associated with Idaho 7 and Citra, opting for notes of pineapple and passion fruit,” Head Brewer Bryan Stewart said.

The newest iteration of Bonk! (6.3-percent ABV), a collaboration project with Velo Garage and Taphouse, is also on tap. This IPA uses Citra, Mosaic and Azacca hops and is brewed with tangerine and lime peel. “Huge aromas of grapefruit, tangerine, pine and quiet blackberry,” Stewart said. “This batch, exclusive to the Double Shift taproom and Velo Garage, is inspired by both Kiley Sutter’s [Velo owner] and my love of a juicy IPA at the end of an intense bike ride.”

Grains & Taps (10 SW. Third St., Lee’s Summit, Missouri) celebrates the re-opening of its bar after a remodel. Starting at 7 p.m., the bar will have special beers on tap and offer tours of the new space. The homebrew supply shop is still undergoing remodeling and will open later this year.

Learn about the joys of home brewing. It’s American Homebrewers Association Big Brew Day 2018 with the ZZ Hops Homebrew Club at BLVD Tours and Rec Center (2534 Madison Ave.) from 10 a.m. to 5 p.m. Club members will brew and educate the public along the brewery’s tour path. The Tours & Rec team will collaborate on the recipe. Open to the public.

Learn to homebrew kombucha at The Brewkery (1443 Swift Ave., North Kansas City, Missouri). The kombucha taproom offers a class ($20) with hands-on instruction from the owners and head brewers, a culture to take home, brewery tour of the commercial set-up, and two four-ounce pours of any kombucha on tap.