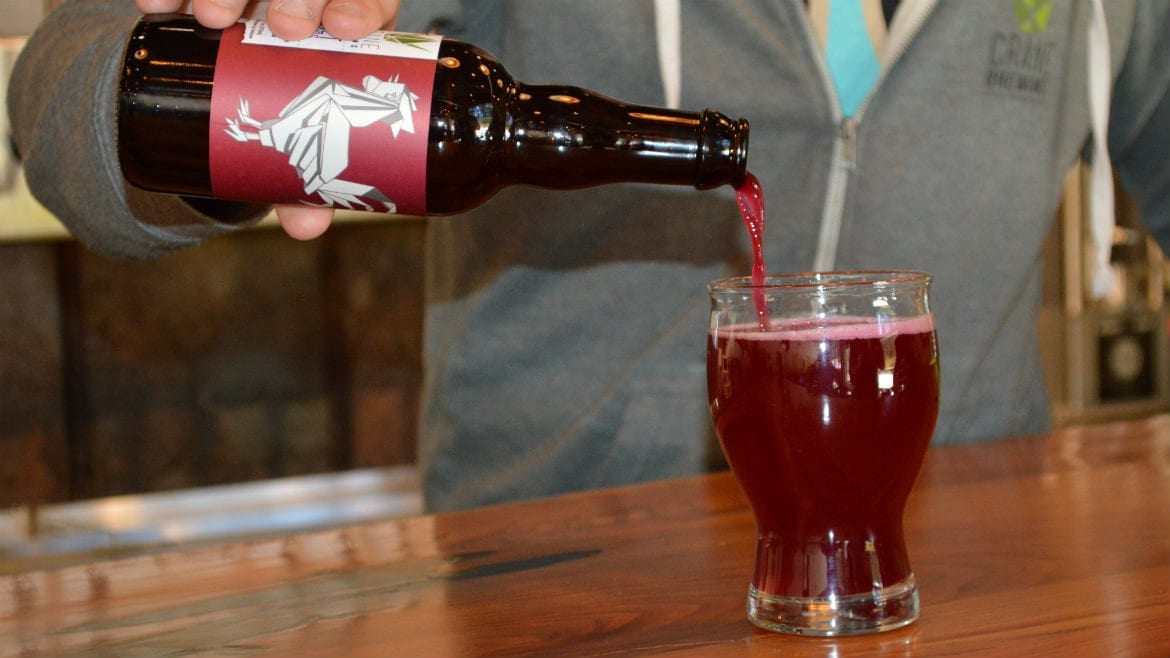 Crane's Beet Weiss, a fall seasonal and one of the Raytown brewery's signature beers, is back. (Jonathan Bender | Flatland)
Share this story

Crane Brewing Co. has always marched to its own “beet.” And this year, it’s more than 1,000 pounds of beet, roughly one per bottle of Beet Weiss, according to co-founder Michael Crane.

“The beets were not overly earthy or tart,” Crane said. “This batch has such an incredible sweetness.”

Beet Weiss, the brewery’s fall seasonal, hearkens back to Crane’s homebrewing days, when he produced Magenta, a beet beer that was shockingly pink and unusual even to a crowd used to pushing the beer envelope with unexpected ingredients.

“There’s richness and more fruity notes even though it’s a vegetable,” Crane co-founder Christopher Meyers said of the latest batch.

The bottle-conditioned Berliner Weiss, was released in 375-ml bottles this past Sunday. The leftover beets were given to Borger Family Farms, the pig farm run by Erik Borger (the former owner of Il Lazzarone and Komatsu Ramen). 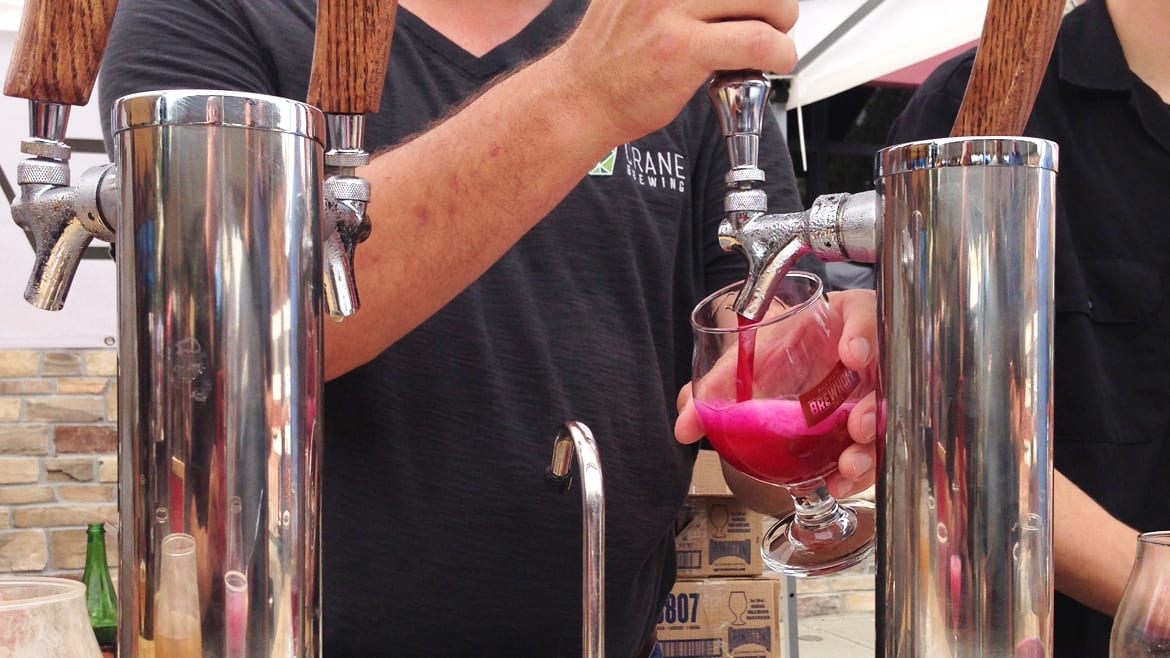 Crane will pour Beet Weiss at the fourth annual Festival of the Lost Township (Raytown Road and East 62nd Street) from 1 to 5 p.m. on Saturday, Sept. 29. The fest, presented by Crane, will have close to 100 breweries, wineries, distilleries, coffee roasters and kombucha makers. Keep an eye out for several breweries that don’t distribute in Kansas City, including Champion Brewing and Burnt City Brewing.

“It’s a very laid-back festival,” Meyers said. “It’s all about people really enjoying beers and knowing that they get to meet the people who brew the beer.”

The festival also features Brewtopia, a homebrew fest with more than 50 homebrewers sampling their beers. Look for a Beet IPA — a collaboration between Crane Brewing and Michael Crane — in the Brewtopia homebrew area.

Tickets are $45. VIP tickets ($65) include admission at noon, a full-size glass and reserved port-a-potties. Designated driver tickets are free if the designated drivers are attending with someone who has a paid ticket. All of the proceeds benefit Three Trails Raytown Kiwanis. 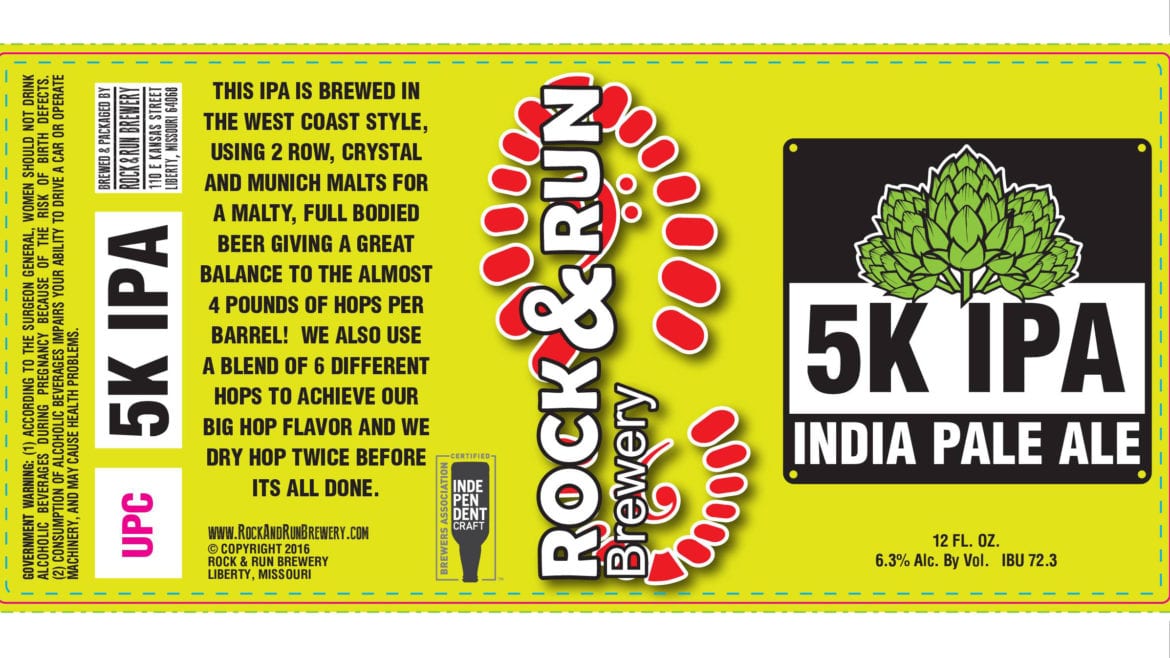 New Axiom Brewing Co. (949 NE Columbus, Lee’s Summit, Missouri) has a pair of takes on a cream ale braggot — a braggot is a mead/beer hybrid made with honey. There’s Straight Out of Clover and Mac Went To The Store Alone, a cream ale braggot made with French vanilla coffee beans from The Roasterie, boysenberry and cinnamon. Breakfast of Champions, their American stout, is also headed back on tap. Strange Days Brewing Co. (316 Oak St.) has Sir Real IPA back on tap today. It is also hosting a 5K with the KC Sports Commission. The run, which begins and ends at the brewery, starts at 6:30 p.m. If you run, you get $1 off beer all night.

Step back into the ’90s with a pub crawl dedicated to the decade from 3 to 10 p.m. at the Kansas City Power & Light District. You get a koozie and snap bracelet and can listen to the music of the ’90s.

HopCat (401 Westport Road) hosts Hoptoberfest from 10 a.m. to midnight. German-style beers (HofbrauHaus Oktoberfestbier, Boulevard’s Bob’s 47 and Weihenstephan Festbier) take centerstage for the Westport beer bar’s celebration of Oktoberfest. They’ll have a limited number of beer steins to give away. Lederhosen are encouraged.

Martin City Brewing Company releases Righteous Candor IPA (5.6% ABV). The limited release will be available in six-packs of cans and on draft. The brewery’s notes say that you’ll get “citrus and tropical fruit” in the aroma, and a “juicy, fruity” flavor.