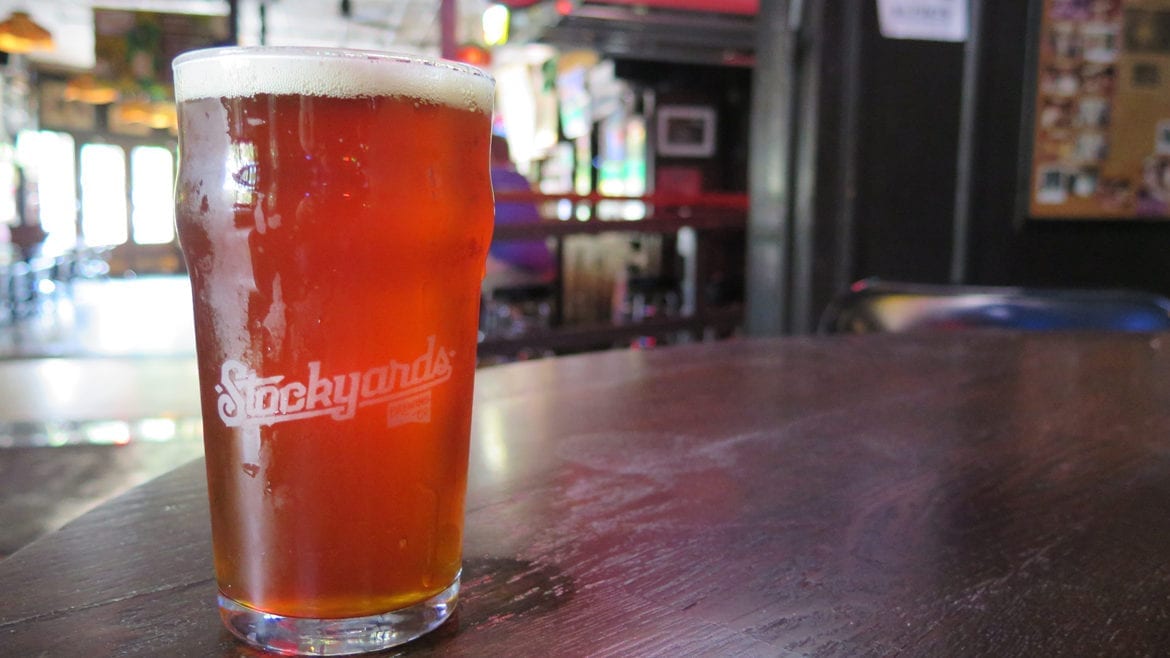 “I chose Stockyards because I wanted to partner with a young local brewery,” VanSant said. 

Kelly’s Westport Inn, founded by Randal Kelly, is now operated by his sons, Kyle and Pat, and Kyle’s children, Mitch and Colleen Kelly. The beer’s name is a nod to the Kelly family’s roots in County Clare, Ireland.

“It’s a light pale ale malt,” Bland said. “We didn’t know until later that the malt company is about two hours away from County Clare, near the Kelly’s family home.”

Even though Kelly’s celebrates its official anniversary on Oct. 28., the beer is being released this month. While supplies of County Clare last, a portion of taproom sales of the red ale will be donated to the HALO Foundation. The Kansas City-based nonprofit provides housing, healing and education to at-risk and homeless children at the local, national, and global level.

Stockyard’s distributor North Kansas City Beverage will work with area bars and restaurants that want to serve the beer. A portion of keg sales will also be donated to HALO.

“We have 15 barrels of County Clare ready and another 15 barrels in fermentation,” Bland said. “Originally, we only planned on making maybe five barrels. Then we realized this could be a big fundraiser for HALO.”

A keg of County Clare Irish Red Ale will also be available at Normal Human for September’s First Friday. See the week’s events below for details. Colony’s co-owners Zach Henderson and Drew Cobb hired veteran homebrewer Rodney Beagle as their brewer last spring and filed a brewery application in late July with the Alcohol and Tobacco Tax and Trade Bureau. Now that construction of the brewery is complete, the taproom will serve several of Beagle’s specialty beers, including Coffee Kolsch, Peaches and Cream Ale, Hazy IPA, Cherry Limeade Gose, and Saison.

Working as a professional brewer is a fulfillment of Beagle’s dream. He use a 55-gallon setup that requires brewing multiple batches in a day to create the desired production volume. While working on a batch of Coffee Kolsch last Friday, Beagle reflected, “I can’t believe it’s been just over a year since we started the process to establish the brewery. It’s surreal and crazy.”

Boulevard Brewing’s Collaboration No. 7 Oak-Aged Lager (6-percent ABV, 16 IBU) was brewed as a collaboration with Arizona Wilderness Brewing Company and Creature Comforts Brewing Company. The beer was released on draft on Aug. 21 and in four-packs of 12-ounce bottles on Aug. 22. Dry and citrusy, Collaboration No. 7 was “briefly aged on French oak staves that impart fruit, spice, toast and tannins similar to aging in a fresh (virgin) French oak barrel,” according to ambassador brewer Jeremy Danner. The lager was also bottle-conditioned with champagne yeast to produce effervescent carbonation.

Red Crow Brewing Company (20561 S. Lone Elm Road, Spring Hill, Kansas) has pushed up release of Anne, a German Alt, to Sept. 1. The fall seasonal beer will be on tap through mid-November.

BKS Artisan Ales (633 E. 63rd St., No. 120) now has its building occupancy and fire permits. If they pass health inspection, they will begin brewing and have beers ready 45 days out. Check Tap List for more updates. Boulevard Collaboration No. 7 is out on shelves now. (Courtesy of Boulevard)

Logboat Brewing Company from Columbia, Missouri, will have its Snapper, Bobber, Flyby, and Shiphead beers on tap at Screenland Armour (408 Armour Road, North Kansas City, Missouri) for the screening of “The Endless,” as part of the Arts and Crafts Film & Beer Festival.

Border Brewing Company (406 E. 18th St.) re-releases its Ribbon Cutter IPA. Brewed with coriander and finished with raspberry, the beer has a tart, hoppy and fruity flavor. While at the taproom, check out the new patio.

Flying Saucer Kansas City (101 E. 13th St.), celebrate the release of Torn Label’s 31 Heroes with a special glass. Starting at 6 p.m., buy the beer and keep the glass for an additional cost.

The Taproom at Crane Brewing (6515 Railroad St., Raytown, Missouri) releases Jalapeño Saison, a saison with jalapeños and pineapple, and Green Hatch Chile Ale, a Farmhouse IPA blended with Kumquat Weiss and Hatch green chile peppers. This beer won the Judges Choice Award at the Iron ChileHead Competition. Chef Tito of the American Fusion food truck will be on site.

Dress up for the Festbier Tapping Party at Kansas City Bier Company (310 W. 79th St.). Wear your lederhosen, and gather at the beer hall from 6 to 9 p.m. for contests, games, prizes and food specials. Head brewer Karlton Graham presents a special tapping toast at 6 p.m.

Barley Bus will pick up and drop off guests at Grains & Taps (10 SW Third St., Lee’s Summit, Missouri) on a four-hour tour of three breweries that include beer samples and a tour guide.