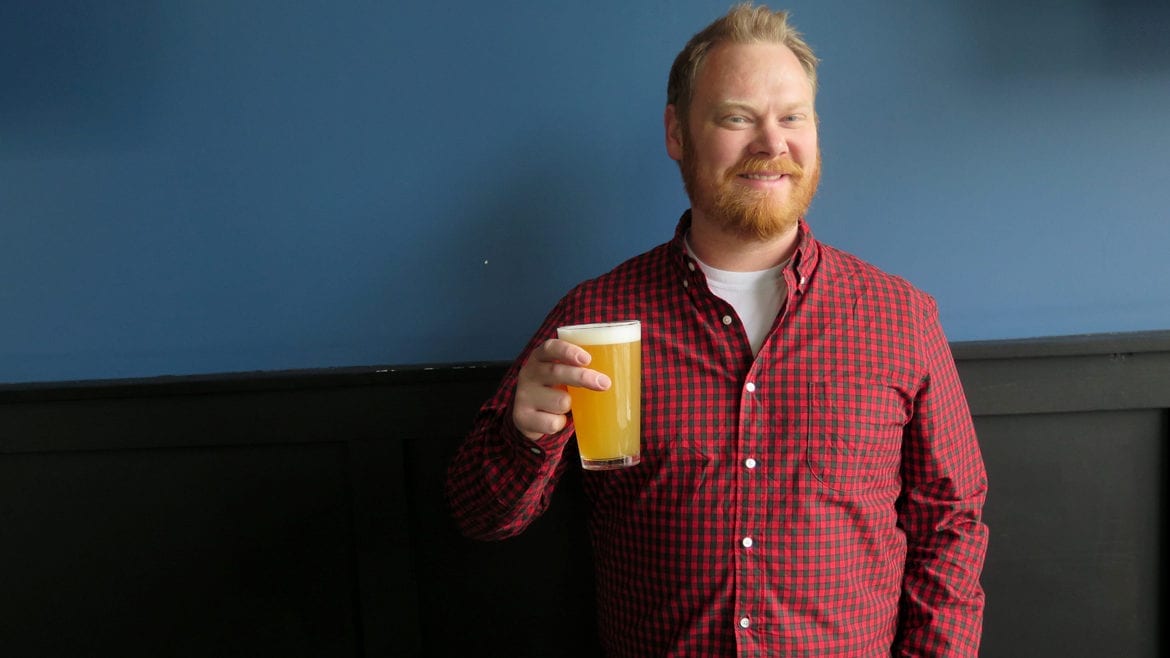 The Crossroads will have a sixth brewery by the end of the year.

“I’ve always wanted to open a brewery, but I wanted to find the right niche,” Stutsman said.

Stutsman brings ample industry experience to this $1.1 million venture. Previously, he worked in sales and marketing at Kansas City Bier Company and Deschutes Brewery. Based in Bend, Oregon, Deschutes ranked seventh on the 2014 list of 50 largest U.S. craft breweries by sales, according to the Brewers Association.

“I learned so much from helping to build Kansas City Bier as a startup over two years,” Stutsman said. “And Deschutes knows how to operate an incredible business.”

When Stutsman met Waner three years ago, their friendship and mutual interest in craft beer blossomed into a business plan.

“We became buddies,” Stutsman said. “I drank his homebrewed beer and became convinced that we could open a brewery. We’ve been working on this business plan and financing for eight months.”

Waner currently works as a regional manager for Tallgrass Brewing Company. He also worked at an Anheuser-Busch distributor for 10 years. Waner will attend Siebel Institute’s World Beer Academy in Chicago, Illinois, in May to prepare for his upcoming role as professional brewer.

Giammonco, a certified public accountant and former owner of Pooches Paradise, a dog daycare and pet spa, contributes operational experience and a share of investment to the startup project.

Stutsman pointed to Side Project Cellar and Brewery as a similar model for City Barrel. The St. Louis brewery produces highly-regarded, sought-after beers and operates a separate taproom with a wine bar atmosphere and setting.

The brewery plans to obtain “a canning line to produce four-packs of 16-ounce cans from day one,” Stutsman said. “City Barrel will be a taproom, liquor store for packaged beer, and event space.”

The taproom will have 10 taps with four taps allotted for “friends and family,” a reference to other breweries that have a close relationship with City Barrel’s founders. Double Shift Brewing (412 E. 18th St.), a brewery and taproom in the East Crossroads, recently signed a deal with Craft Republic to begin distribution of its beers in kegs throughout Kansas City, beginning March 13. The move to distribution signals a major growth step for a local brewery that opened in mid-2015.

“We are really looking forward to this step for us,” Double Shift founder Aaron Ogilvie said. “We are truly excited to make our beer more accessible to the everyday beer drinker, and look forward to the opportunities it may bring.”

Double Shift boosted its brewhouse production to prepare for this growth.

“From a production standpoint, we doubled our fermentation capacity last year from our initial 30 barrels [comprised of] two five-barrel fermenters and two 10-barrel fermenters,” brewer Bryan Stewart said. “Now we’re running with six 10-barrel fermenters. This allowed us to produce far more product in anticipation of eventual distribution plans. Additionally, we have been working to increase workflow and employee efficiency in the brewhouse to compensate for the breakneck brewing schedule.”

“After the initial phase, we’ll launch our Briar & Bramble ESB, some seasonal offerings like Literally Can’t Even Spiced Belgian Strong, and some of our kettle sours, including Strawberry Field Trip and Guava Lamp,” Stewart said. Strange Days Brewing is ready to take flight and has opened once again after a two-month hiatus. (Pete Dulin | Flatland)

Kansas City Bier Company released Pils, its newest year-round beer, on March 5 in six-packs of 12-ounce bottles and on draft. Its Pils, brewed with 100 percent imported German malt and hops, was the first-place winner in the Continental Pilsner Category in the 2015 Great International Beer, Cider, and Mead Competition.

“Pils has an assertive but delicate bitterness and a crisp, dry finish that can only be achieved with using all-imported ingredients,” Steve Holle, KC Bier founder and managing owner, said in a release. “Many domestic lagers call themselves a pilsner, but they forgot the hops. We didn’t.” KC Bier Company taps Mike’s Zoiglbier (5-percent ABV, 22 IBUs), a limited-edition anniversary beer with medium body in a Keller Lager style, made by brewery employee Mike McGuigan. Originating as a homebrew style from the Oberpfalz region of Bavaria, Germany, the name “zoigl” refers to the use of a star as a symbol to tell neighbors that a batch of beer was ready to drink.

Fringe Beerworks (224 SE Douglas St., Lee’s Summit, Missouri) releases its spring seasonal, Tight Rope Tart (8-percent ABV), described as a “traditional Berliner Weisse on steroids,” by brewery co-owner Eddie Pease. “We are doing it ‘mit schuss’ which translates to ‘with a bullet.’ You can enjoy the beer straight or with a bullet of flavored syrup.”

KC Bier Company taps a barrel of its Maibock, a lighter bock style with a bouncy hop profile, at Bier Station (120 E. Gregory Blvd.) The barrel tapping begins at 6:30 p.m. Other KC Bier Co. biers will also be on tap.

Boulevard Brewing Tours & Rec Center (2534 Madison) hosts Hop Quiz Trivia: GIRL POWER from 6 to 8 p.m. In celebration of International Women’s Day, this trivia session focuses on powerful, successful and notorious women of the past and present. Top three teams win glory and beer. Tickets ($10) include two draft beers of your choice. Half of each ticket sold will benefit the Metropolitan Organization to Counter Sexual Assault (MOCSA).

“We’ve clocked this one with nearly four pounds per barrel of Citra, Idaho 7, and Enigma hops from whirlpool to dry hop,” brewer Bryan Stewart said. “Expect a huge aroma of tangerine citrus, a touch of pine, and nuanced with qualities of pineapple and other tropical fruit.”

“We took a traditional English Mild and subbed out the English Base Malt with Irish Base Malt, making it Kansas City’s first (to my knowledge) Irish Mild with cereal,” Beagle said. “In this case, we used 12 pounds, or eight family-sized boxes, of actual Lucky Charms in the 4.8-percent Irish Mild Ale.”

Cinder Block Brewery (110 E. 18th Ave., North Kansas City, Missouri) opens its doors at 9 a.m. Break your fast with smoked corned beef hash and biscuits and gravy. For lunch, chow on reuben egg rolls and brats. Steamboat Bandits perform from 12-4. In addition to its beer, the brewery will have Jameson whiskey, and Baileys and coffee. Entry fee is $3; $10 includes a color changing glass, entry and your first beer.

Grain to Glass (1611 Swift Ave., North Kansas City, Missouri) hosts its fifth annual Snake Saturday Beer Garden, a prime location to watch the parade. The $5 cover includes one beer (21 and over). Additional tickets available for beer and food, including Irish coffee, scones, corned beef and cabbage, fries, and brownies. Irish beers and cider on tap. Winners of the Irish-only homebrew competition will be announced at 10 a.m.

Kansas City Bier Co. will have a float in the Brookside St. Patrick’s Day Parade. The brewery invites people wearing lederhosen or dirndls to walk with the float. For details, email Trisha@kcbier.com.

Bier Station (120 E. Gregory Blvd.) is the place to be for Spring Forward for Reproductive Rights, a fundraiser for Planned Parenthood Great Plains. Proceeds from sales of Perennial Artisan Ales beers, including Spring Forward Saison, will benefit the nonprofit.

Boulevard Brewing releases its latest Brewhouse One Series Rye on Rye on Rye on Rye (15-percent ABV), a rich, tawny ale aged in whiskey barrels multiple times. Individual 12-ounce bottles will be available for $12 each; limit four bottles per transaction. Bottles will be sold from the first floor Tasting Room. The line will begin at the Tasting Room doors, located at the southwest corner of the Tours & Rec Center (2534 Madison). Doors open at 10 a.m. Valid ID required. One dollar from every bottle of Rye on Rye on Rye on Rye sold will benefit the Rose Brooks Center.