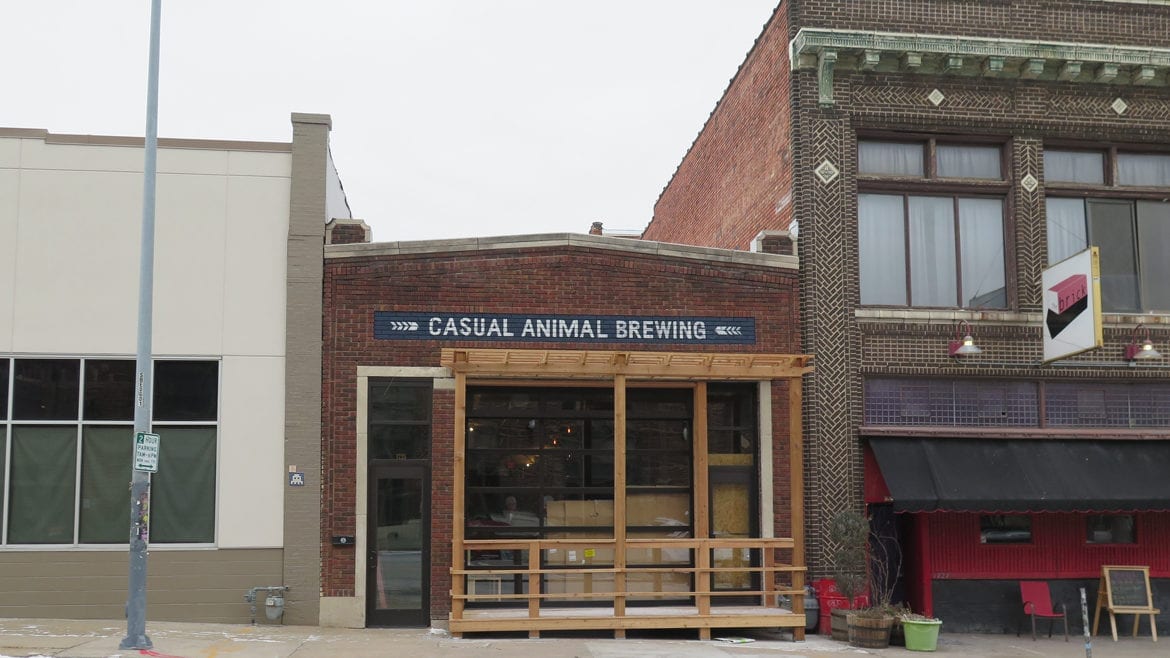 Casual Animal is located in the Crossroads next to The Brick. (Pete Dulin | Flatland)
Share this story

Kyle Gray anticipates opening Casual Animal Brewing (1725 McGee St.) in early February 2018 if construction and final approvals proceed without a hitch. Located next door to The Brick, the 2,500 square-foot brewery and taproom is housed in a former tobacco warehouse space. More recently, the building was used as a storage space for an automobile collection.

“The building was raw space when we acquired it,” Gray said. He nodded at square red tiles along a wall. “The building dates to 1907. It was made with tile brick. We’ll keep the exposed brick and exposed ducts for an industrial look.” Taproom capacity is 50 people. A garage door was installed in the front to allow access to a front patio for more seating.

A graphic designer by trade, Gray designed colorful imagery that covers a span of wall behind the main bar and a side wall. The mix-and-match images include a giraffe, Buddha and iconic symbols associated with Kansas City. Bold graphics add youthful energy and provide a vivid counterpoint to the inherent yesteryear feel of the space.

By late December, Gray and his construction team had completed plumbing, installed drainage in the floor and set up a seven-barrel system in the brewhouse. Built by Alpha Brewing Operations in Lincoln, Nebraska, the system is the same one used by Norseman Brewing in Topeka, Kansas.

A grain cracker, mill, bags of grain, and a keg washer occupy the rear corner of the brewhouse. The brewery will serve beer directly from kegs to its taps. Forgoing the use of brite tanks not only saves space in the brewhouse but also reduces strain on a tight budget.

While he’s eager to begin brewing, Gray’s checklist includes additional work on the 12 taps, finishing the taproom buildout and myriad other tasks with help from his family.

“My brother Alex custom built the bar and other furnishings in the space, driving back and forth from Salina each weekend,” Gray said.

Once brewing begins, Gray plans to produce “traditional, everyday beers,” in keeping with the industrial, blue collar history of the Crossroads. Initially, Casual Animal will serve a honey wheat, red ale, stout, IPAs and other styles to be determined.

“I want to dial in the brew system before going for more exploratory, funky beers,” Gray explained.

Casual Animal will also allocate one tap to its Local Motive program. A collaboration beer, made with input from a rotating nonprofit partner such as BikeWalk KC, will be served on tap with proceeds from sales donated to the organization. Return of The BIG Chill Strong Beer and Chili Tasting

Brewer Micah Weichert and Cris Morgan held the First Annual BIG Chill, a strong beer and chili tasting, in 2011 at the now-defunct 75th Street Brewery. The event lasted for several years under the stewardship of brewer Pat Sandman. When 75th Street closed last year, the fate of the festival was uncertain.

The BIG Chill beer fest finds new life at Stockyards Brewing Company (1600 Genessee St., #100) from 1 to 5 p.m. Saturday, Jan. 27, in the West Bottoms. Local and regional breweries will have one or two beers on tap, plus a homemade chili featuring its strong beer.

Tickets ($35, limited to 200 people) will be available in the Stockyards taproom and online. Each ticket is good for entry to the event, a custom BIG Chill tasting glass, unlimited strong beer samples, and a custom BIG Chill bandanna. Dress for cold weather since this is an outdoor festival. A peek at the original logo for one of Double Shift’s pilot beers. Smoke Ritual brings a new take on smoke to Kansas City. (Courtesy of Double Shift Brewing Co.)

Double Shift Brewing Co.’s (412 E. 18th St.) Smoke Ritual (9.2 percent ABV), a Belgian quadrupel made with oak-smoked wheat that was one of the Crossroad brewery’s pilot beers, is back on tap.

KC Bier Company (310 W. 79th St.) has summoned Der Hammer (7 percent ABV, 70 IBUs), what they call an “India Pale Lager/Doppelbock.” It’s on tap at the beer hall and in and around Kansas City. Tapcade (1701 McGee St., #200) hosts a Three Amigos party in honor of Torn Label’s anniversary. The brewery will have three fresh IPAs on tap alongside a three-taco special, and a 7:30 p.m. screening of the classic comedy.

Torn Label (1708 Campbell St.) turns three years old today, and it’s releasing 2018 Funky Monk to celebrate. It’s their Belgian single — Monk & Honey — that’s been aged in whiskey barrels for two years. Each barrel has a different strain of wild yeast and the final beer is a blend of the various barrels.