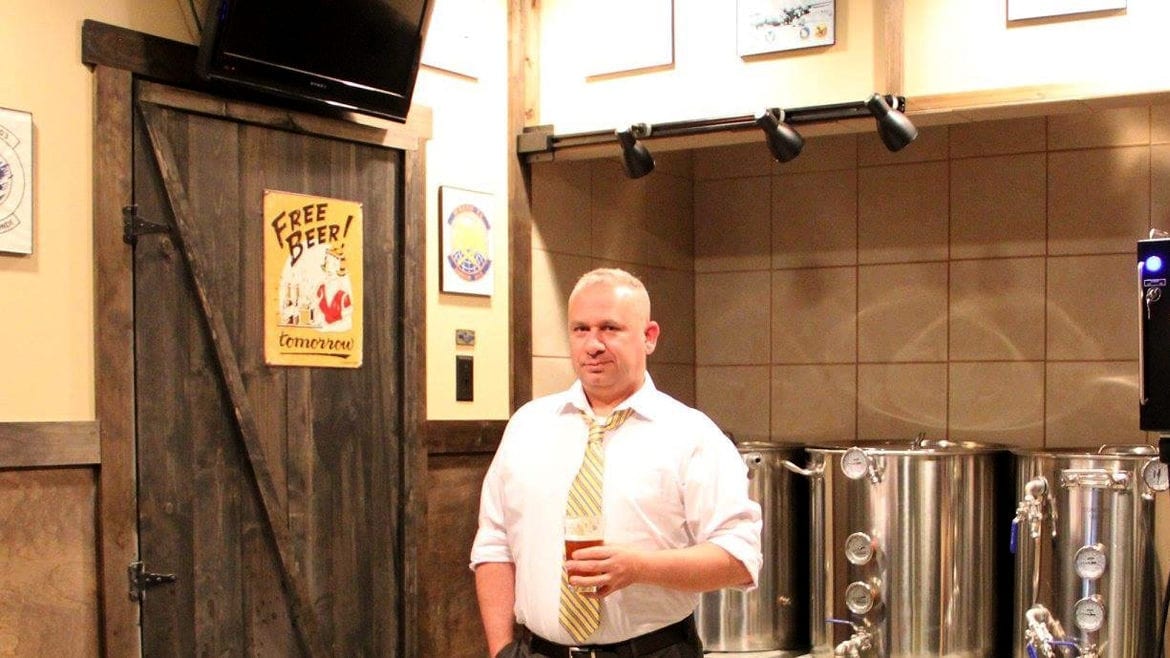 Callsign Brewing is getting ready to report for duty. Last week, brewer Steve Sirois signed a lease for a building at 1447 Gentry Street in North Kansas City. Remodeling begins in early May and while Callsign Brewing’s projected open date will depend on licensing, Sirois is “shooting for the end of October.”

The brewery’s name is related to a military identification system.

“Callsign refers to a name and number given to a crew for a mission,” explained Sirois. “The call signs differ from one base or operation to another. It’s just a way to identify the flight. Almost like airliners [use] United Flight 172.”

Call sign also ties the military career of Sirois with his new endeavor. Sirois, a master sergeant, has served for the last 27 years in the active duty Air Force, Air Force Reserves, and Air National Guard. Currently, he serves with the Missouri Air National Guard in Saint Joseph. The brewery’s offerings will also recognize veterans and members of the armed services.

“We name our beers after fallen aircraft to honor the men and women that gave the ultimate sacrifice to our country,” said Sirois. “We want to preserve the names of our fallen since they are the true heroes of our nation. We will cover all branches of service and also honor fallen police officers and firefighters.”

Callsign Brewing will be a seven-barrel brewery and taproom that seats 50 to 60 people. Sirois plans to brew a wide variety of ales, India Pale ales, browns, stouts, Irish reds, and Belgian blondes. In the first year, Sirois “will focus on getting our equipment dialed in,” with plans to add distribution in the Kansas City area in the future.

Sirois will be joined in the brewhouse by his son Steven Sirois, Jr. and Morris Loncon, who will both serve as part-time brewers. All three brewers at Callsign each have six years of homebrewing experience.

“We started out like everyone else brewing five gallons, and worked our way up to the 1.5 barrel, all-electric system, in my basement brewery,” said Sirois.

The West Bottoms is Set to Sparkle

Boulevard Brewing Company and Piney River Brewing, based in Bucyrus, Missouri, will produce a one-of-a-kind sparkling ale as a special release for the fourth annual Boulevardia. The craft beer and music street festival will be held Friday, June 16, and Saturday, June 17, in the historic Stockyards District in the West Bottoms.

“We came up with making a sparkling ale after being inspired by the history of the Stockyards District and its connection to agriculture and honest, hard work,” said Steven Pauwels, Boulevard brewmaster. “Our brewers and the crew from Piney River wanted to make a beer that spoke to the location of the festival while also addressing a desire to brew an easy-drinking, thirst-quenching beer appropriate for a summer, outdoor festival.” Border’s assistant brewer Kelly Wing found a homebrewed bottle of a Belgian Tripel in his basement last year along with the recipe.

“The beer was three-years-old, but we decided to try it anyway. It was great!” Martens said. “We liked the name Trapdoor for the basement reference, as well as for the fact that it hides the ABV in a way that can certainly ‘trap’ you.’ We did our best to replicate the original recipe on the scale up, though there are a few differences.”

Trapdoor Tripel’s maltiness is offset by a crisp finish. “We used some Belgian candy sugar to boost the alcohol-by-volume,” said Martens. “The real purpose of the sugar addition is to lighten the body of the beer to give it that ’Champagne’ finish.” The spirit of tequila lives in this new brew from Boulevard. (Boulevard Brewing Company)

To create its Tequila Barrel Lime Gose, Boulevard Brewing Company acquired a truckload of freshly emptied tequila barrels from various distilleries. The brewery aged current beers in the barrels to assess the character the barrels would provide. Next, the brewing team decided to brew a German-style gose infused with lime peel. Traditionally, gose is a top-fermented German style with a characteristic lemony sourness and salty finish.

According to Ambassador Brewer Jeremy Danner, Boulevard’s Tequila Barrel Lime Gose presents “aromas of oak, vanilla and caramelized banana with bright lime character” followed by “subtle tequila notes and coconut.” Flavor-wise, acidity is accented by “hints of coriander and sea salt” with notes of citrus, malt sweetness, and a “touch of heat provided by tequila barrel-aging.” Heavy Riff Brewing Company will be at the Parkville Microbrew Fest. Head brewer Jerid Saffell is pictured above. (Pete Dulin I Flatland)

Free State Brewing Company (636 Massachusetts Street, Lawrence) releases its Dirty Kanza Kolsch on draft and in bottles. A crisp, highly carbonated ale with origins in Cologne, Germany. Light straw in color with a light body and slightly herbal finish, this hoppy Kolsch is not as bitter as a Pilsner.

Free State Brewing Company hosts an open house at its East Side Brewery (1927 Moodie Road, Lawrence) from 5 to 8 p.m. Enjoy music and exploring local trails. Preview the Burroughs Creek Trail “Hike Through History,” project. Beer and food will be available for sale.

Extend the weekend at Grains & Taps (10 SW 3rd Street, Lees Summit, Missouri), hosting a Crane Brewing Tap Takeover from 6 to 10 p.m. The taproom features eight to 10 beers from Crane and Junipucker, a tart saison brewed with juniper berries created by a group of ZZ Hops homebrewers and scaled up by Crane Brewing.