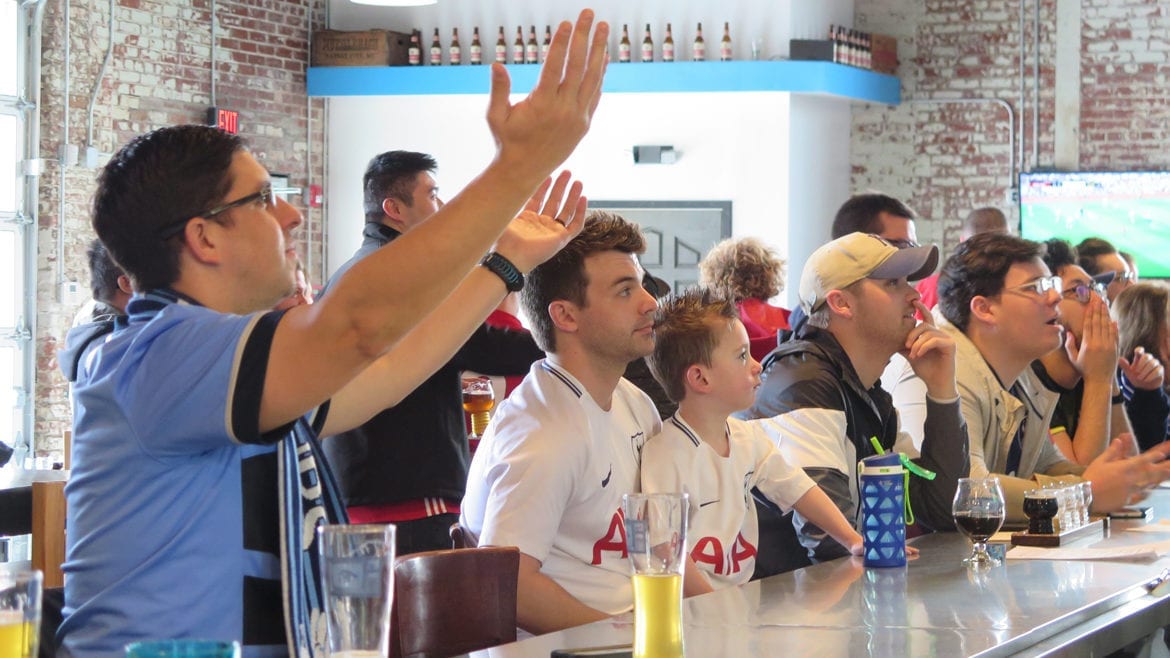 Nathan Howard, Chris Beier and Alec Vemmer, the co-owners of Strange Days Brewing Company (316 Oak St.), have shared a love of soccer since their days of homebrewing in a garage. The friends brought that love of the sport to the brewery, where Strange Days hosts Premier League football match viewing parties on weekend mornings.

“We’re all soccer dorks,” Howard said. “Chris was a soccer player in college. The three of us used to brew beer at home on Saturday and Sunday mornings and watch soccer games. Now we’re here doing what we’ve always been doing, making beer and watching soccer. There’s an underserved population of soccer league fans in Kansas City.”

Due to the time difference in western Europe, Strange Days opens early on specific weekend mornings so fans can watch live games. Roughly the equivalent of the National Football League in the U.S., the Premier League includes twenty of the “best of the best” teams. Strange Days also hosts watch parties for Bundesliga games, the German professional soccer league.

“Some of our customers can watch matches at home, but they say they’d rather come here to watch with other fans and drink beer,” Howard, who roots for London-based Tottenham Hotspur Football Club, said.

Strange Days plans to brew a World Cup-inspired series of beers for the matches that take place from June 14 to July 15, 2018, in Russia. The series is a natural extension of the brewers’ interests.

“Strange Days is a combination of soccer, beer and global influence,” Howard said.

The brewery already crafts beers using ingredients and culinary influences from around the world to put a spin on their beer styles. Strange Days’ roster includes Australian Gold Ale and Japanese Black IPA with ginger and other Asian-influenced ingredients. Greenwich Line, a milk stout with cold brew coffee, is named after the timezone where English football is played.

“During the World Cup, we’ll have 8 to ten different beers that represent some of the countries participating,” Howard said.

Look for an E.S.B as a nod to England, a traditional Belgian style, Mexican IPA, Swiss chocolate stout, and a Peruvian-inspired gose with fruits and chilies.

Howard hinted at another beer soon to be released, “We have a Moroccan Mint Witbier coming with orange peel and toasted coriander.” A deconstructed arugula-beet salad is one of the courses featured in the Crane Brewing beer dinner at District. Pour House + Kitchen. (Contributed | District Pour House)

“Anytime we do a beer dinner, we sit down with the chefs,” Meyers said. “We try to choose a theme, if possible. We will all taste beer and begin to build a menu. It is all a balance, trying to have the right courses and beer styles and pairing them together. Sometimes we will move a beer all around the menu before deciding exactly where everything fits.”

Developing menu pairings between craft beer and food is a creative conversation. Flavors, aroma, alcohol by volume, and even the body of a beer factor into why it will or won’t work with specific foods. The chef conceives of a dish with ingredients that complement the beer’s existing characteristics, or even incorporates beer into a dish.

For example, Chef Mango used Crane’s Omar Porter, an English porter with “notes of bitter chocolate, licorice and a hint of caramel sweetness,” in a wild mushroom demi-glace sauce with concentrated flavor and silky mouthfeel. The beer’s flavors should seamlessly accent the sauce and bold espresso-laced lamb served with cauliflower puree and roasted garlic peas with prosciutto.

Other courses include a deconstructed arugula-beet salad with grape tomatoes, lobster corn risotto ball, scallop poke, and chocolate torte. To see how the other pairings square up, reserve a seat at the table by contacting District at 816-333-0799. On Thursday, Cinder Block Brewery will begin distributing kegs to Lawrence, Kansas, through Crown Distribution. Crown’s territory includes Topeka and Salina, but Lawrence will be the brewery’s initial focus in the state. Northtown Native, Block IPA, Weathered Wit and French Cider will be available on tap at select Lawrence bars and restaurants. After the debut rollout, Cinder Block will rotate in seasonal additions.

Cinder Block will work with different distributors to introduce its beers to Johnson County and Wyandotte County later this year. The expansion into Kansas was a matter of timing for the nearly five-year-old brewery.

“We’ve been distributing for three years in Missouri,” brewery owner Bryce Schaffter said. “We wanted to get the process and flow down. The time felt right now to distribute in Kansas. It’s not forced growth. Over the last two years, we’ve added brewing capacity and met the needs of our North Kansas City distributor. It’s striking a balance between what we’re already doing and our capacity.”

“People in Lawrence want to drink Bucky’s beers,” Schaffter said. “We’ve also had lots of phone calls from people in Kansas asking where they can get our beer.”

Schaffter anticipated that Cinder Block’s brand and style of beers will strike a chord with Kansans.

“Kansans are a ‘sweat of the brow’ and ‘salt of the earth’ people,” Schaffter, who hails from rural Iowa, said. “I think this is a good opportunity for folks to enjoy our easygoing styles of beer and cider.” Boulevard Brewing’s new canning line is up and running. (Courtesy of Boulevard)

Torn Label Brewing’s (1708 Campbell St.) 2018 Quadtucky! Quadjillo was aged in fresh oak and a Woodhat Whiskey barrel for seven months. This boozy sipper is now available on draft at the taproom. Bottles, available in the future, will be exclusively at Brookside Liquor.

Crane Brewing (6515 Railroad St., Raytown, Missouri) has Berry Weiss back on tap. The last keg of last year’s Beet Weiss is nearly gone. Enjoy some while supplies last until the next seasonal release in fall.

Boulevard Brewing Company also shared another recent big announcement. Its canning line has been installed and is now producing 12-packs of KC Pils and Pale Ale, the two newest additions to the canned portfolio. The canning line represents the third and final phase of the brewery’s multimillion dollar expansion. Boulevard built a new brew house in 2005 in the first phase. Next, the brewery added Cellar Five in 2016 and vastly expanded its fermentation capacity. The 24,000 square-foot Canning Hall adjacent to the brewery is capable of filling up to 350 12-ounce cans per minute and is able to produce a variety of can sizes and package configurations.

Sandhills Brewing (111 W. Second Ave., Ste. D, Hutchinson, Kansas) has a second allocation of Chickadee Berliner Weisse available for online reservation of four-packs of cans. Recipients can pick up their allotment between April 28 and the end of May. Meanwhile, Sandhills Brewing will also can Junco New England IPA in four-packs that are available exclusively at the brewery for on-site purchase. The brewery also acquired two freshly emptied barrels that previously held Buffalo Trace bourbon and will used for a barrel-aged version of Barred Owl Scottish Export.

Through April, Kansas City Bier Company (310 W. 79th St.) will donate 50 percent of all Dunkel-Klein sales to Child Protection Center (KC) to help raise money for kids and young adults who have suffered from neglect and abuse. Cinder Block Brewery (110 E. 18th Ave., North Kansas City, Missouri) releases the next beer in its Hop Maven series of experimental IPAs at 4 p.m. in the taproom. Hop Maven X (8.8-percent ABV, 85 IBUs) is an Imperial Block IPA with more than 60 pounds of hops used for dry-hopping. As the 10th IPA in the series, the beer pops with flavors of mango, tangerine and pine.

Screenland Armour (408 Armour Road, North Kansas City, Missouri) releases The Gauntlet, a dry-hopped Wheat Ale produced in collaboration with Martin City Brewing. The beer’s name refers to the coveted powerful glove that drives the plot of “Avengers: Infinity War.” The movie and beer debut on April 26. The Gauntlet will only be on tap at Screenland’s Armour and Tapcade locations and Martin City Brewing.