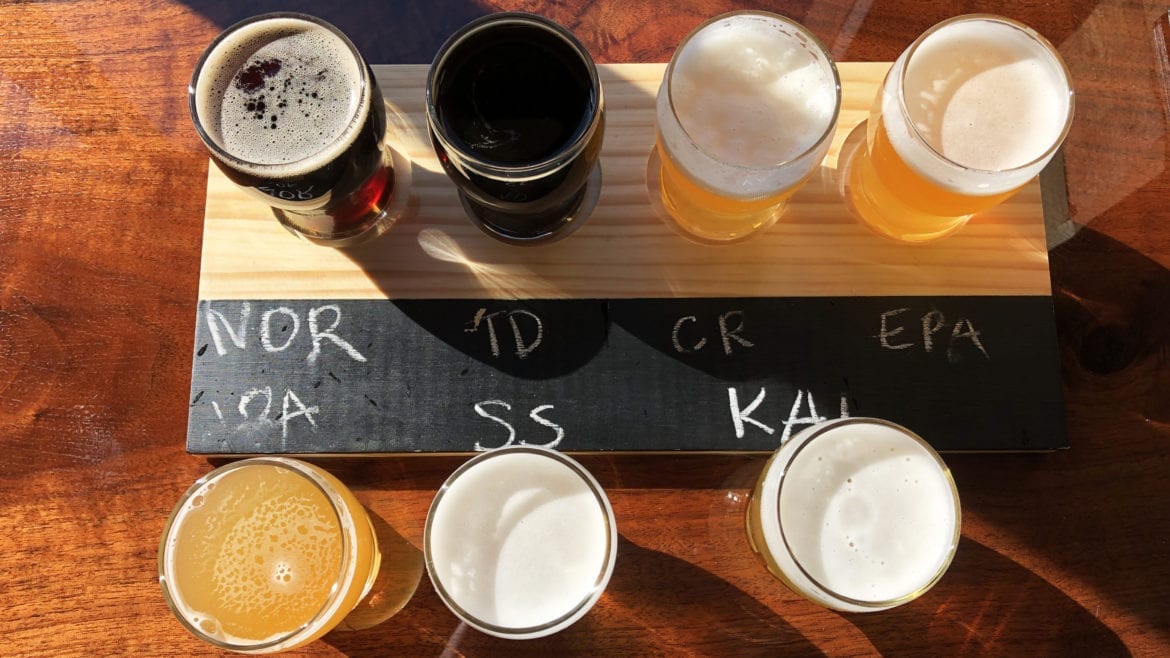 This past Sunday, a dad bounced on a baby on one hip next to a group of women casually paying attention to the pair of flat screen televisions showing college basketball. Sunlight streamed across the live edge wood counter that lines the window at 3 Trails Brewing Co., where a pair of beer drinkers looked out toward at the Independence Municipal Court building. 3 Trails is the second brewery to open in Independence in the past year, joining Apex Aleworks.

The standout of the initial brewery lineup was Trail Dragger, a Russian imperial stout (9.9% ABV) with a caramel finish and some roasty notes up front. Another flight candidate is Norbert, a dry-hopped sour made with dragon fruit (hello, Harry Potter fans). It is a deep red, almost purple, with plenty of berry notes. 3 Trails also has food available for delivery from restaurants on The Square like Up Dog, Diamond Bowl, Square Pizza and El Pico. 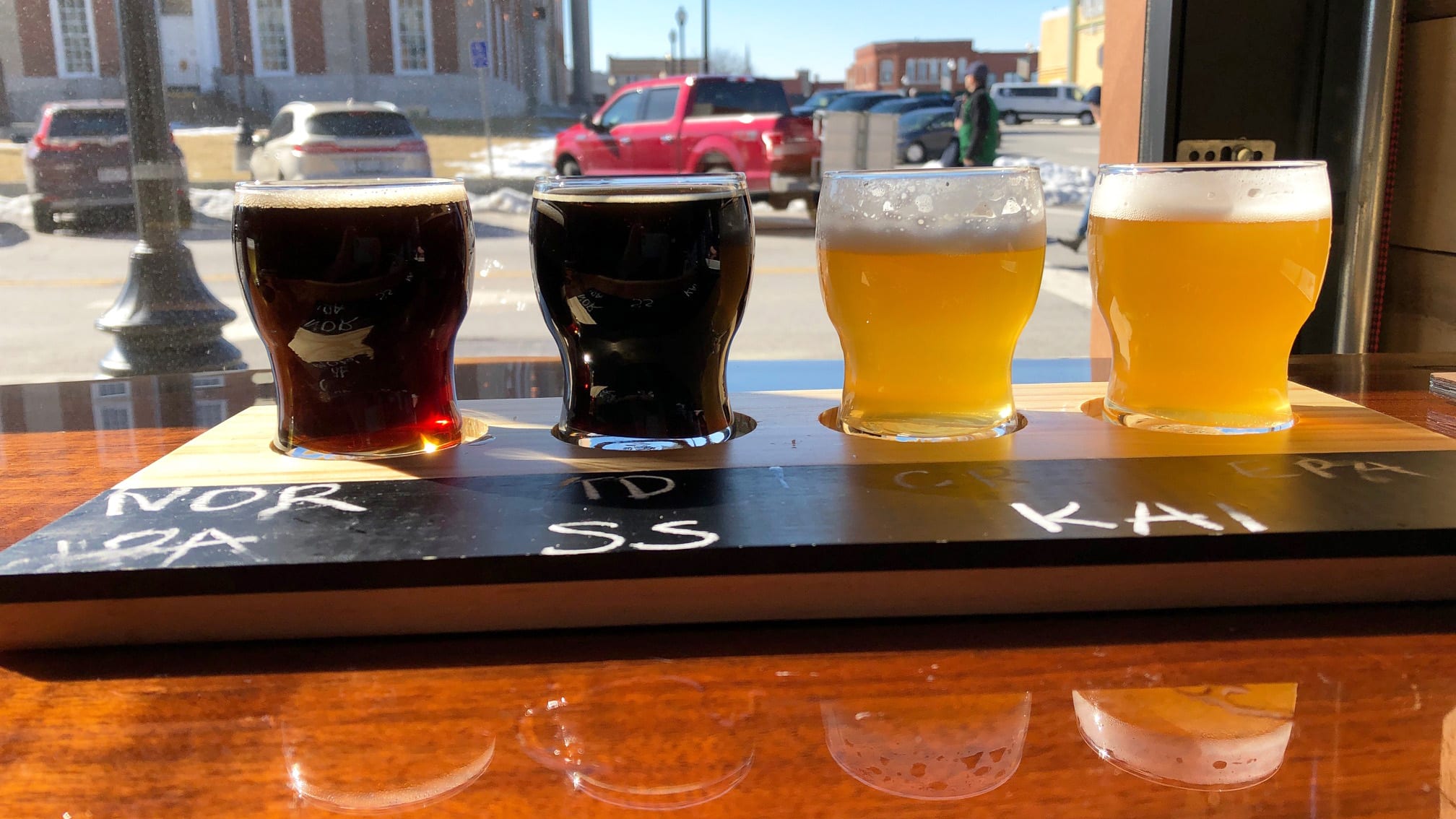 If it feels like you can’t keep up with new breweries in the Kansas City area, you’re not alone. In addition to 3 Trails, Transport Brewing Co. in Shawnee, Kansas, and City Barrel in the Crossroads opened in the past two weeks. Black Stag Brewery (623 Massachusetts St.) had a soft opening over the weekend in Lawrence, Kansas. The brewpub is serving a Belgian wit, IPAs and an oatmeal stout.

BKS Artisan Ales has a collaboration with Alma Mader Brewing on tap. The lager has late, light melon notes and checks in at 5% alcohol by volume. A lager collaboration between BKS Artisan Ales and Alma Mader Brewing is on tap at the Brookside nanobrewery. (Jonathan Bender | Flatland)

It doesn’t just have to be one day a week, but leaning into Taco Tuesday never hurts. Mission Taco (409 E. 18th St.) is hosting a Taco Tuesday to benefit Wayside Waifs from 5 to 9 p.m. If Lineage — the collaboration beer between Side Project, Shared Brew and Bri Burrows (head brewer at Big Rip) — is still on tap, get a pour next door at iTap Crossroads.

You typically have to win a championship to actually drink from the Stanley Cup. They probably won’t let you drink from it, but the Stanley Cup — the trophy given annually to the National Hockey League champion — will be at the Blueline Hockey Bar (529 Walnut St.) at 9 p.m.

Get grown up milk and cookies at Grinders (417 E. 18th St.) from 5 to 8 p.m. with cookies and Martin City Brewing Co.’s Brooo (a milk chocolate stout collaboration with Shatto Milk Company).

Best Eat In the House | EJ’s Urban Eatery’s Espresso-Rubbed Smoked BrisketBest Eat in the House features dining recommendations from people in and around Kansas City. For this episode, we asked Columbus Park Ramen Shop and Happy Gillis Café and Hangout co-owner and chef Josh Eans for the one dish he…

Ain’t no party like a stout party. Cinder Block Brewery (110 E. 18th Ave., North Kansas City, Missouri) will have three versions of Black Squirrel (a Russian imperial stout), as well as a dessert pairing with Nothing Bundt Cakes and a flight of stouts from 4 to 9 p.m.

Torn Label Brewing Co. (1708 Campbell St.) isn’t afraid to use some hops. Lup Sup, a juicy New England-style IPA, makes its first appearance of 2019 and drops at 4 p.m. in four-packs of cans and on draft.

Strange Days Brewing Co. (316 Oak St.) celebrates its first anniversary from 6:30 a.m. to midnight. The River Market brewery will show English soccer to start the day and then have live music with The Phantastics (5 p.m.). Cheesy Street, a grilled cheese food truck will be on site, and they’ll have a host of special releases: barrel-aged brews (Polka Dot & Butterflies is a bourbon maple syrup beer), Ryetous (a Rye barleywhine), and Outciders (cider),

The Big Rip Brewing Co. (216 E. Ninth Ave., North Kansas City, Missouri) is hosting a pop-up with Kind Food KC, a plant-based restaurant in the works in the nearby Iron District (a food hall built out of shipping containers), to benefit the Troost Market Collective from 5 to 8 p.m. Get chips and dip (guacamole and salsa verde) or a loaded sweet potatoes topped with cashew cheese, black beans and fresh avocado.

Ever thought about becoming a cicerone (a beer sommelier)? Transport Brewing Co. is hosting a BeerSavvy Bootcamp from 5:30 to 9:30 p.m. to help those interested in becoming a cicerone learn more about beer quality, off flavors, describing beer and ingredients. The class is $99.