Farm to Market & Boulevard Have A New Collaboration 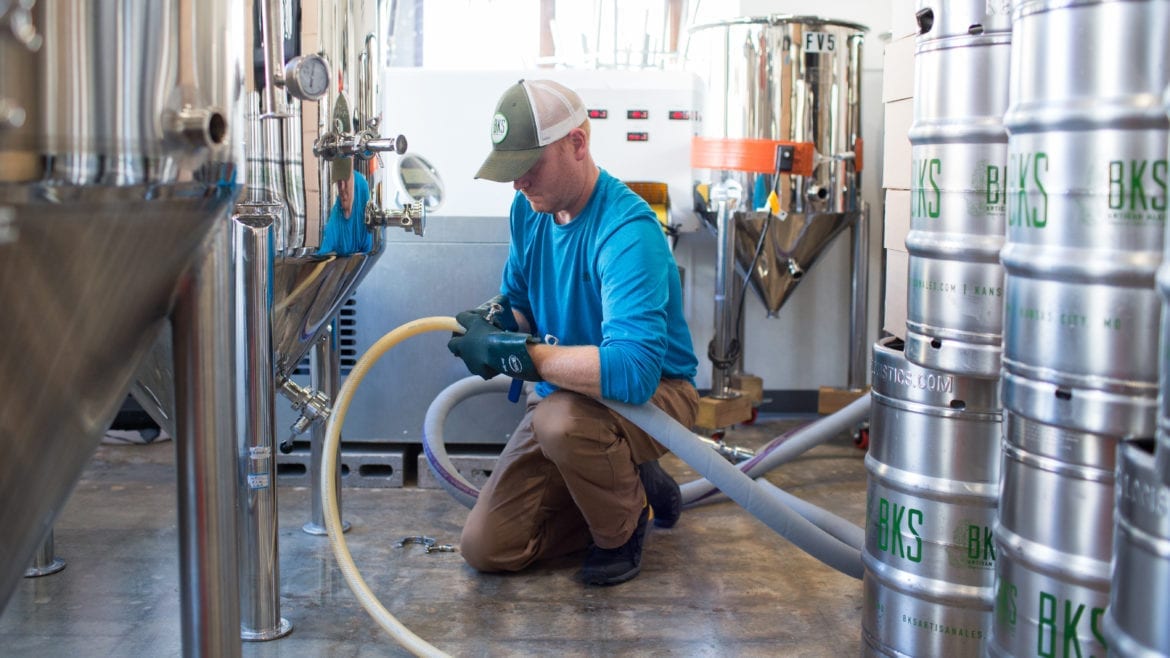 It’s a solid four-pack of beer. Literally a solid. Farm to Market Bread Co. has teamed up with Boulevard Brewing Company to make Boulevard Unfiltered Wheat Hot Dog Buns, which are out now and will be available until Labor Day.

“Boulevard was gracious enough to work with us,” Farm to Market Vice President John Friend said. “We wanted to do something special for our 25th anniversary.” 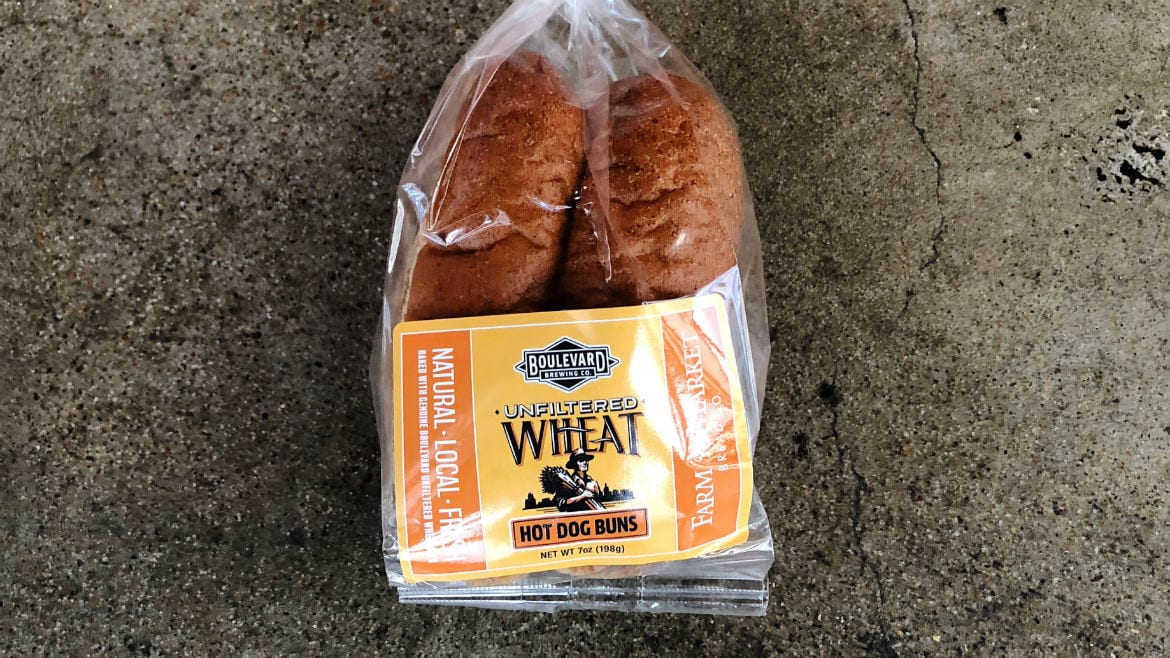 Farm to Market, which opened in September of 1993, has made a bread with Boulevard in the past. Nearly two decades ago, they produced Unfiltered Wheat beer bread.

“We refresh our offerings and that was one we cut,” Friend explained.

But when it came time to think of a beer to honor the company’s anniversary, co-founder Mark Friend (John’s father), thought about bringing beer bread back. A baker was dispatched to the liquor store and the first batch included everything in a Boulevard variety pack.

“That was really strong and we didn’t want it to be overpowering,” John Friend said. “The star of the hot dog bun is the brat or hot dog.”

Farm to Market also toyed around with a rye bread using Boulevard’s Rye-on-Rye, but it wasn’t a fit for a hot dog bun. The final recipe ended up being a combination of Farm to Market’s egg dough, typically used for their hamburger buns, wheat bread dough, and Boulevard Unfiltered Wheat (in lieu of water).

“The beer is baked out but it enhances some of those fermented flavors,” Friend said. “It’s really good to have with beer or without beer.”

The dinner ($75) begins at BKS Artisan Ales (633 E. 63rd St.) at 5:30 p.m. on Thursday, June 7. Appetizers will be served in the taproom before dinner guests walk over to Heirloom Bakery and Hearth for the main course and dessert. Each course will have its own beer pairing and you’ll get a take-home brew, as well. BKS has been serving Heirloom’s cookies on the weekends alongside its beer and Heirloom has just developed a sourdough bread using BKS’ spent grain that will be served during the dinner.

The eighth annual Westport Summer Beer Festival is set for Saturday, June 9, from 5 to 9 p.m. The festival, presented by Sporting Kansas City (a few players will be in attendance), is in front of McCoy’s Public House (4057 Pennsylvania Ave.). They’ll have more than 80 beers from over 30 breweries (Funkwerks, Brooklyn Brewing, COOP Ale Works, among them), as well as a few local distilleries. Tickets are $35 in advance, $40 at the door. 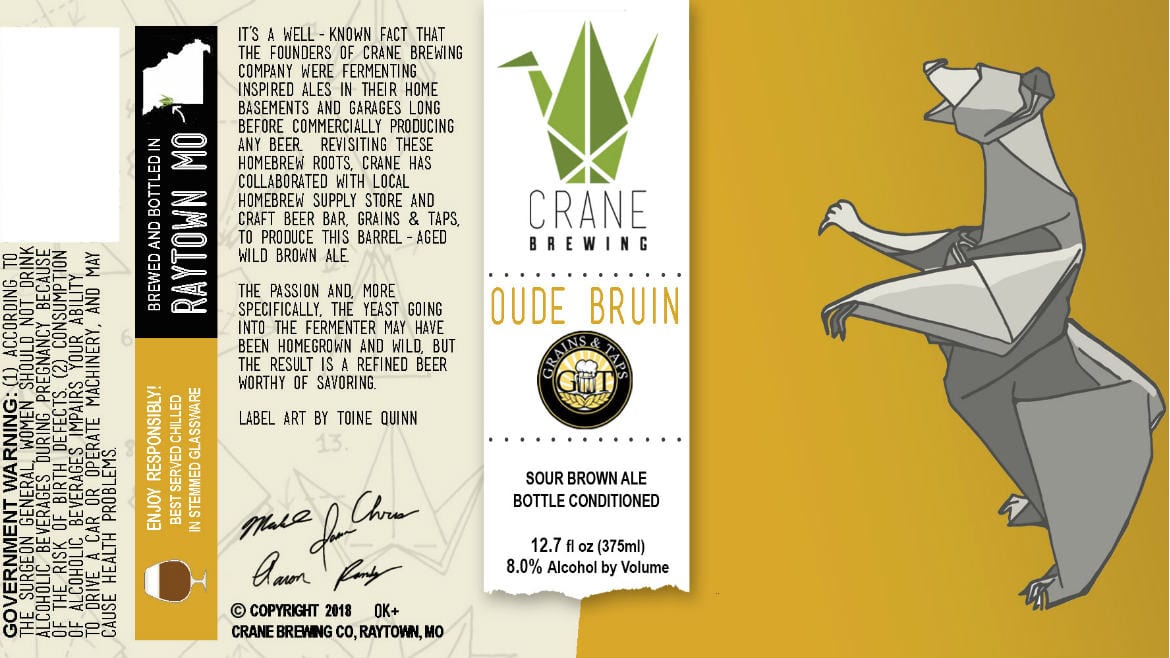 Grains & Taps (10 SW 3rd St., Lee’s Summit, Missouri) collaborated with Crane Brewing Company on Oude Bruin — a brew that’s spent more than a year aging in wine and whiskey barrels. The beer is actually a “Build Your Own Beer” reward offered by Crane, and purchased by Grains & Taps, during its CrowdBrewed (crowdfunding) campaign. The beer will be tapped at 6 p.m. on Wednesday, May 30.

Cinder Block Brewery (110 E. 8th Ave., North Kansas City, Missouri) has Hop Cuddle on tap. The second iteration of the New England-style IPA is made with malt, wheat and oats. Hops (citra, mosaic, among them) are then added in to get big juicy notes of tropical fruit.

Green Room Burgers & Beer (4010 Pennsylvania Ave., Suite D) has a pair of new brews on tap. The brewery has a Belgian Table Beer (4.4% ABV) with “flavors of fresh baked bread, clove, citrus, and spice,” and a Saison (6.2% ABV) that is “malty with subtle notes of toffee and plum.” Cinder Block Brewery and The Parker are collaborating on a five-course beer dinner this week. (Courtesy of The Parker)

The Parker at The Fontaine (901 W. 48th Place) and Cinder Block Brewery are collaborating on a five-course beer dinner for the restaurant’s monthly Fork and Bottle Dinner Series. The dinner begins at 6:30 p.m. and features burnt ends paired with Northtown Native, a crispy pork shoulder with Retribution Rye, and an apple cider semifreddo with Cinder Block’s English cherry cider. Reservations are $65 (plus tax and tip) in advance, $75 the night of the event.

Torn Label Brewing Company (1708 Campbell St.) is releasing Hang ‘Em High IPA. And for the twentieth batch, the brewery has scaled up the beer — made with a revolving door of hops — to a 30-barrel batch.

“The faster we brew Hang ‘Em, the faster everybody drinks it,” Torn Label CEO Rafi Chaudry wrote in an email.

Hang ‘Em High will be available as a draft only beer (you can get a growler from the taproom), but is likely headed for cans in the future.

Crane Brewing Company (6515 Railroad St., Raytown, Missouri) is hosting its second annual Tiki Night, in collaboration with Mission Taco, from 4 to 9 p.m. Crane will have two cocktails and three Tiki-inspired beers on tap. Here’s the beer lineup: Funnel Cloud (an IPA with passionfruit and lime zest), Captain Colada (a tart brew with orange and lime zest and coconut), and Tiki Weiss (a sour with cinnamon, lime and grapefruit zest). Mission Taco will be overseeing the taco bar.

The Kansas City Tap Tour ends today. The brewery tour, underwritten by Visit KC, has a guidebook which includes discounts at breweries and the chance to get stamps to earn prizes (although the logistics of you hitting all 19 breweries on the tour today may be a challenge).

Crane Brewing (6515 Railroad St., Raytown, Missouri) has a happy hour from 2 to 5 p.m. with regular pours for $3. And then from 5 to 10 p.m., the brewery is hosting a fundraiser for Big Brothers Big Sisters of Greater Kansas City.

Kansas City Bier Company’s Der Bauer should be on shelves (in six-packs) and taps today. The farmhouse ale is golden in color and made with German malt and hops (it’s dry hopped with Mandarina Bavaria). It’s the first seasonal beer that KCBC has bottled.

The Big Rip Brewing Company (216 E. 9th Ave., North Kansas City, Missouri) is hosting its Get Ripped Beer Festival from noon to 4 p.m. to celebrate its fifth anniversary. The brewery will be releasing two special brews: Death by Stereo Coffee Kolsch and Hefe the Killer. The Coffee Kolsch is a collaboration with Blip Coffee and brewer Josh Collins noted in an email that it was made with “seven pounds of Guatemalan whole beans.” As for the hefeweizen, Collins writes that “it’s a hefe that has been oaked and soured with lactobacillus.”