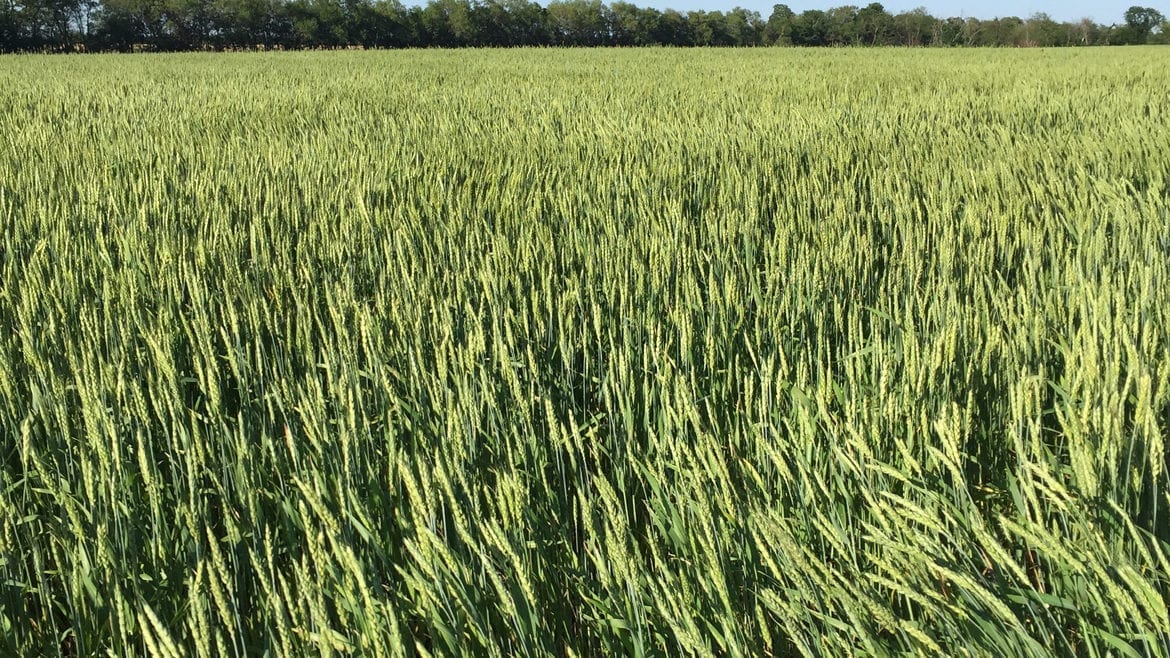 Starting the first week of June, Cinder Block Brewery’s Weathered Wit will contain wheat grown by Great Plains Custom Grain, based in Wellsville, Kansas. Malt from that Kansas-grown wheat will journey to North Kansas City, Missouri, for the brewing process. Then the beer will make its way back to Kansas, as well as Missouri in Cinder Block’s distribution territory. In early June, Cinder Block expands distribution from Lawrence, Kansas, to Johnson County, Kansas.

“I want to grow barley and wheat and malt it for breweries,” Van Horn said. “I’m working on growing particular varieties of barley.”

Schaffter received samples and tested the grain for brewing. After initial trials, the two companies struck a supply deal. Cinder Block will soon brew and release a 30-barrel batch of Weathered Wit using the Kansas wheat.

“Witbier is a rustic style of beer,” Schaffter said. “There are more flavor characteristics with Great Plains’ wheat that lends itself to witbier. The grain has aggressive, bright tones and more flavor. Kind of like eating whole wheat bread. This is a good opportunity to pair the grain with our beer.”

Looking ahead, Van Horn has applied for grant funding to conduct a feasibility study on operating a malthouse. Currently, barley and wheat malt is produced and supplied by malters in other regions of the U.S and overseas. If plans bear out, Great Plains will be able to custom grow and malt grain for distilleries and breweries at competitive cost with a closer supply chain. As an essential ingredient in beer, that malted grain supply could open up fresh possibilities for locally-produced beer and spirits. A few months ago, a small group of women approached Boulevard Brewing brewmaster Steven Pauwels with the idea of brewing a beer on International Women’s Day (March 8). The idea expanded to include an invitation to women from every department to submit ideas via email for a test beer. Forty-four women participated in the process. A committee of four women picked the top three ideas: Blonde Ale with Coffee, Orange IPA and Salted Caramel Stout.

Test Salted Caramel Stout, the winning concept selected by vote, was brewed recently and released last Friday at Boulevard Tours and Rec. Center (2534 Madison). A dollar from sales of each pour was donated to MOCSA.

“We thought it would be neat to get people involved in the innovation process who don’t normally get to voice their ideas,” quality sensory coordinator Abby Zender said. “We had to sort some ideas out due to cost, ingredient sourcing, time constraints. One of my favorite ideas was called The Feminine Mystiki: Tropical Coconut Chai Ale.”

“The response was pretty overwhelming,” brewer Megan Wood said. “We had ideas ranging from a traditional Vienna lager to a dill gose.”

Wood wrote the recipe for the winning beer. Three women that submitted the same idea for the test beer joined Wood in brewing the stout.

“Hillary Dunnegan, Erin McGonagle and I got to brew on our original system alongside brewers Megan Wood, Stuart Kersting and Dan Chivetta,” beer hall lead porter Carlene Schipfmann said. “My husband and I have homebrewed, but it was a completely different experience to brew such a large batch on such large equipment.”

Wood valued the opportunity to work with women from other departments.

“It was an eye-opening experience for me to see desire from other departments to be involved with the process,” Wood said. “We are starting an ‘idea box’ that is open to the whole company. Hopefully you’ll see many more employee-inspired beers.” Sandhills Brewing (111 W. Second Ave., Ste. D, Hutchinson, Kansas) tapped its first barrel-fermented beer, a tart Tequila Gose. The sour wheat beer was brewed with coriander and sea salt and then fermented directly in an oak Tequila Barrel for a month and a half. The beer is available in 32-ounce growler fills and will soon be packaged in cans.

Strange Days Brewing (316 Oak St.) has its Mexican IPA with jalapeño and lime peel (7.8-percent ABV) on tap. ESB (6.5-percent ABV), a new beer, is also on tap to celebrate the end of the English Premier League season.

The taplist at Calibration Brewing (119 Armour Rd., North Kansas City, Missouri) includes Let It Flow Golden Ale, I Scare Myself IPA, Back to Black IPA, Rye I Am A Rock, Whole Lotta Love Grapefruit IPA, Is This Love Mojito Cider and I Never Knew You Raspberry Cider. American Craft Beer Week runs May 14 to 20. Check listings below for numerous events at a taproom near you.

Cinder Block Brewery releases KC Weiss, a Berliner Weiss initially kettle-soured with a Lactobacillus blend, then fermented with a combination strain of Brettanomyces and brewers yeast. It is tart and slightly bread-like, with rustic tones reminiscent of a farmhouse ale.

International Tap House (403 E. 18th St.) welcomes COOP Ale Works as a trivia sponsor. COOP’s new Fly Me Away New England IPA will be on tap along with Pils and Spare Rib.

In collaboration with 99 Hops House at Argosy Casino, Cinder Block Brewery created its North of the River Series, second edition, as a Summer Pale Ale with pineapple, grapefruit and orange. The beer release begins at 5 p.m. at 99 Hops. The beer will also tap at Cinder Block’s taproom at noon.

Boulevard Tours & Rec. Center (2534 Madison Ave.) hosts a Spring Cleaning Sale. Purchase a wide variety of Boulevard Brewing items at a discount. A $5 ticket provides access to a 45-minute shopping session and a beer to sip while browsing.