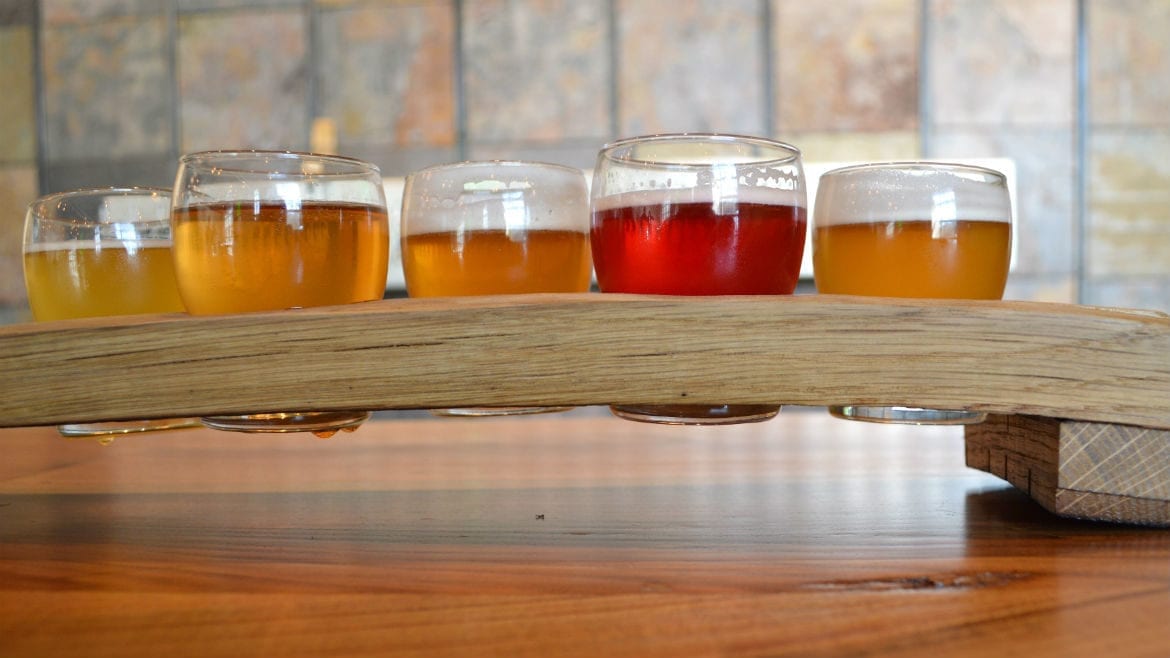 Grandma’s fridge is gone, and the mismatched tables will go back to bingo halls or Rotary clubs or wherever mismatched tables retire. Crane Brewing Company is gearing up to open its permanent taproom on Friday, November 25.

“We always wanted a spot where people who enjoy our beer can come to the source and meet us,” says Crane Vice-President Chris Meyers.

He strolls through the temporary taproom, which opened over the summer, and on to the brew house where a Crane De Noel (a dark sour ale) is being brewed. The half-pours and bottles purchased from grandma’s fridge — the affectionate name given by regulars to the cream-colored refrigerator straight out of a Norman Rockwell painting — helped fund the gleaming new taproom where workers are set to install a half-wall of mirrors behind a custom, 26-foot-long wooden bar.

The lamps above the bar were uncovered during the initial construction of the brewery, hidden behind a drop ceiling. The taproom will have seating for roughly 50 people at tables built from reclaimed barn wood. While Raytown allows for smoking in bars, Crane’s taproom will be nonsmoking.

“Our goal is to create a space that people can call home in Raytown,” Taproom manager Brett Main says. “There’s nothing quite like this here.”

For the first time, Crane will offer flights. The flight boards, which hold five beers, were built from the Crane Brewing Company’s pilot barrels.

“We’ve had this in mind from day one,” Meyers says. “We just had to scrap the plan while we were getting the brewery open.”

In addition to onsite exclusives, they also plan to randall brews. Main mentions a pineapple basil Farmhouse IPA and fresh citrus zest with the Tea Weiss. They’re also looking at brewing a base gose beer that they could then randall with fruit.

Beyond their own beer, the team at Crane is planning on an occasional guest tap, as well as a small, rotating list of local wine and whiskey. They’ll also have cold-brew coffee from neighboring Benetti’s Coffee Experience, and the Brewkery’s Lucky Elixir kombucha. For those who want something to snack on with their drinks, they’ll have local nuts and food trucks will pull up to the garage doors of the taproom.

Plans are underway to add a patio next year, in anticipation of the Katy Trail Connection, which is just across their parking lot, being completed. The new taproom will also allow Crane to increase production. The temporary taproom, located on the other side of the brewhouse, will now be taken over completely by barrels. The team at Crane has built a cold room where hops can be stored.

“When we opened, we went on Craigslist and bought every deep freezer we could find,” Meyers says. “There are probably still 10 around the building. Those will probably go back to Craigslist now.”

The grand opening of the taproom is at noon Friday, November 25. The taproom’s regular hours will be 4 to 9 p.m. Tuesday through Thursday, 2 to 10 p.m. Friday, and noon to 10 p.m. Saturday. Crane offers tours weekly on Saturday at 2 p.m.

“It’s a mix of rustic and modern elements and that’s always been similar to our beers,” Meyers says. “Our motto is ‘tradition evolving.’ We love taking traditional styles and putting a modern twist on it.”

Tap List | Just the Cure for Your Halloween Hangover

Beer and Barbecue Matches Made in Heaven