Strange Days Brewing is Coming to the River Market 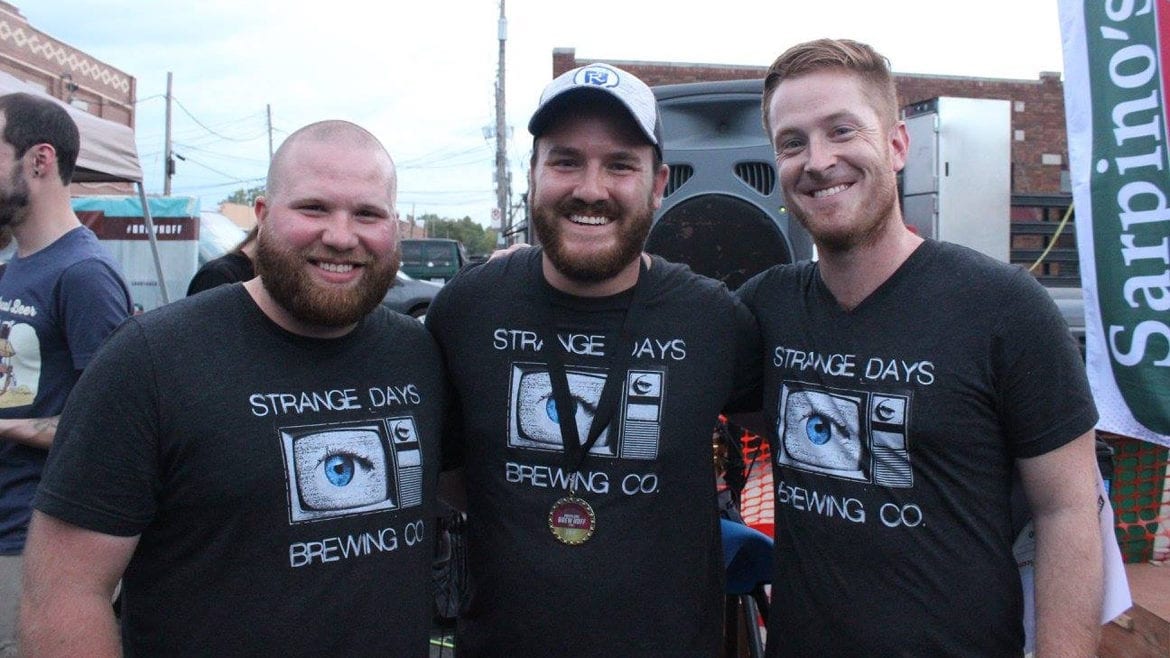 Strange Days Brewing Company (316 Oak Street) has secured a 4,500-square-foot building in the River Market and anticipates being open by year-end, if plans proceed on schedule. Co-owners Nathan Howard, Chris Beier, and Alec Vemmer will share duties as brewers.

“The building that we were lucky enough to find is full of character and soul too and was impossible to pass up,” said Howard. “Exterior construction should start in the coming week.”

Strange Days will then need to receive city approval for the interior construction and wait for federal approval from the Alcohol and Tobacco Tax and Trade Bureau. They’re hoping to open in December.

The trio have brewed together over the last two years and have been fixtures at local homebrew festivals. Howard has been homebrewing for close to a decade, while Beier and Vemmer each have around four years of homebrewing experience.

The brewery’s name is meant to capture the spirit of the times.

“I don’t need to cite too many examples of the strange-ness around us,” said Howard. “Beer has always been one of our outlets. The beer community is a great escape from all the other ‘stuff’ going on.”

The brewery’s River Market location is in a building that was once part of the former Muehlebach brewery complex. Muehlebach’s multiple buildings once covered the entire block at 4th and Oak Streets. Only a couple of buildings remain from that post-Prohibition era, circa late 1930s to 1950s.

“Our landlord [Jake Schopp] has maintained that it is [part of the Muehlebach brewery],” said Howard. “It appears to be in an overhead picture of the old brewery. The second floor also still has signs of fire damage. He maintains that this happened when Schlitz occupied the building.”

Schlitz acquired the Muehlebach brewing operation in the 1950s. Schlitz brewed and distributed beer in Kansas City until it ceased operations in 1956.

“We wanted to be in a high-traffic and energetic portion of the city. The addition of the KC Streetcar and the development happening all over the River Market is really exciting,” said Howard. “Also, we get a lot of inspiration for our beer from global cuisine. The diversity of the neighborhood and proximity to the City Market is a huge creative spark.”

The brewery and 2,000 square-foot taproom with additional outdoor seating will initially offer no food. The owners plan to partner with food trucks and allow carry-in from area restaurants. As fans of domestic and international soccer, the owners plan plan to open early on Saturdays and Sundays to show European soccer.

The beers will have a global focus with American, English, and Belgian styles.

“We will also create new styles and flavors with both local and global spices and fruit: an Asian-inspired Saison, black IPA, and a Mexican-inspired IPA,” said Howard.

Once the nine-barrel brewhouse system is up and running, the owners plan to “build a following and allow demand to dictate distribution.”

“We would like to have local distribution in a few years,” added Howard.

Since the 2009 closure of River Market Brewing Co., the neighborhood has lacked a brewery while several have opened in the Crossroads to the south and in North Kansas City.

“We think Kansas City has plenty of room for more beer and breweries. We want to be a part of and add to KC as an emerging beer city,” said Howard. “On a more selfish level, we are passionate about beer and think it should make a pretty decent way to make a living.”

— Find more local stories at flatlandkc.org and by following @FlatlandKC.