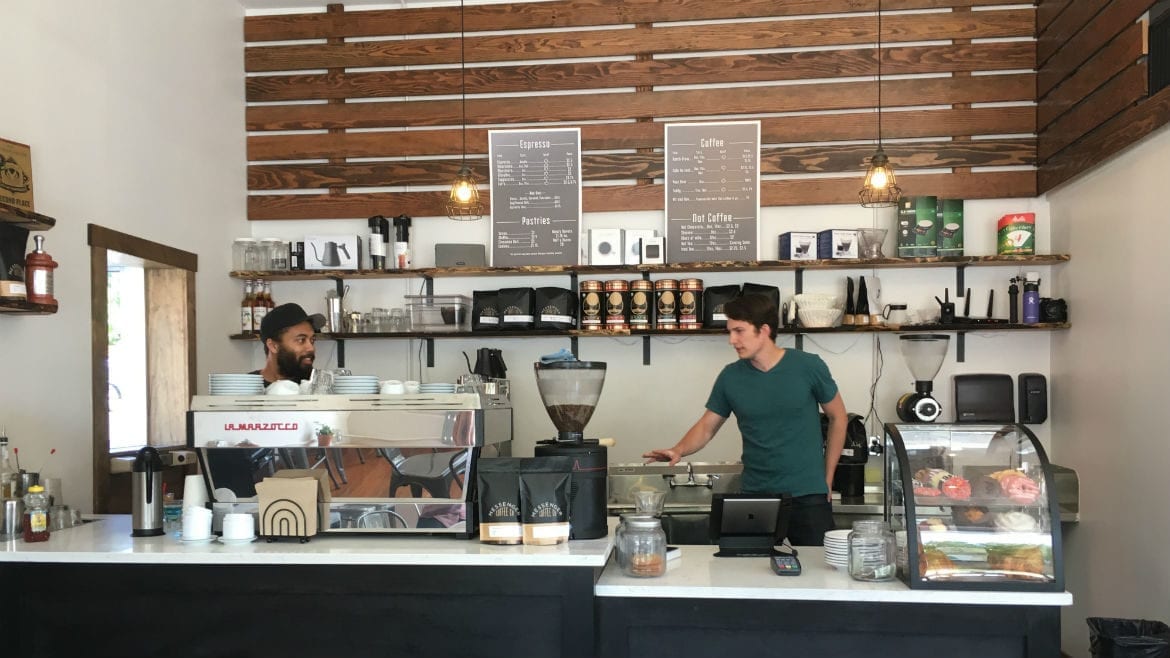 A young man in a checkered shirt and jeans sips an iced latte while trucks and traffic rumble by on Central Avenue. He pauses to take in the view of downtown — the pings from his laptop momentarily forgotten.

This might be the best $4 view in the city, only it’s not in Kansas City, Missouri. It’s in Kansas City, Kansas, where Splitlog Coffee quietly opened three weeks ago at 548 Central Avenue, across the street from Slap’s BBQ.

“Strawberry Hill is in this unique position being so close to downtown Kansas City, Kansas, and Kansas City, Missouri,” said Simeon Bricker, the manager of Splitlog Coffee. “It’s ripe for becoming a hip new spot.”

That’s long been the thought of Adam and Caleb Wittmer, the brothers who own the building. And this isn’t their first attempt to bring a coffee shop to Strawberry Hill. Flywheel Coffee operated for eight months in the former barber shop space between December 2012 and July 2013.

“It’s unfortunate that it didn’t work out with Flywheel, but the coffee community has grown in Kansas City since then,” Bricker said.

The tiny square building has been updated with a coat of grey paint and the major addition of a drive-through.The interior is a mix of white paint and light wood, a pair of shelves with grey stools ring two walls. The name is a tribute to mill owner Mathias Splitlog and Splitlog Hill, the name given to the neighborhood that we know now as Strawberry Hill. 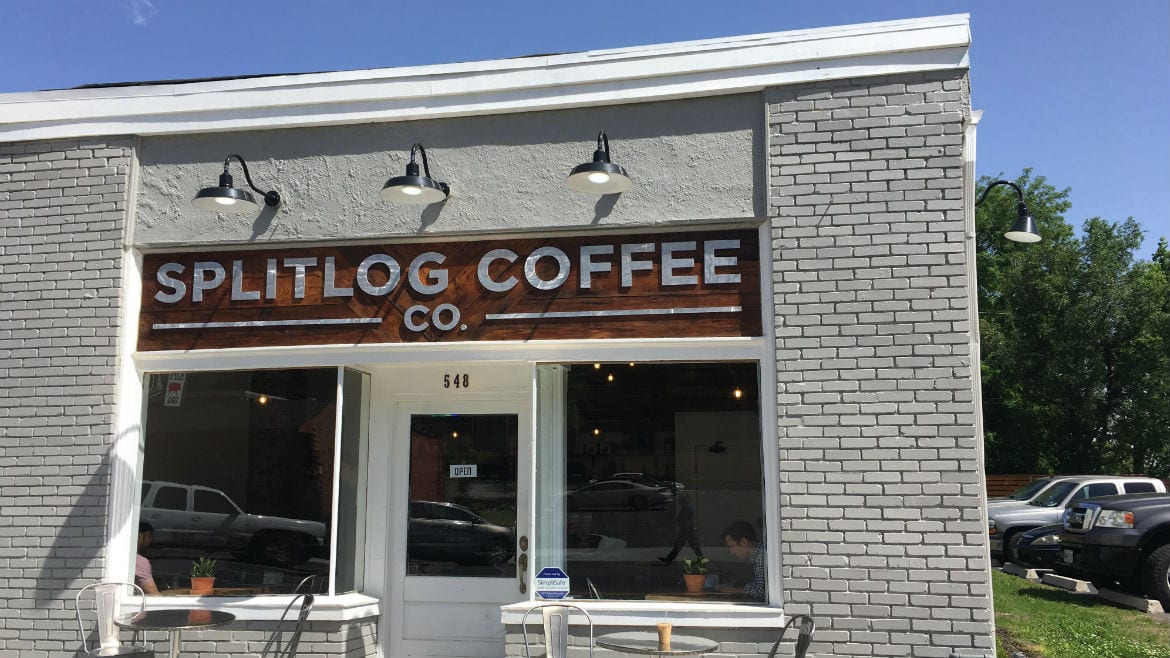 The Wittmer brothers tabbed Bricker, who has been behind the bar at Quay Coffee and The Roasterie, to run the shop back in February. They spent the last three months designing and building out the space.

“The idea for the shop was to emphasize convenience and efficiency while holding on to quality. That’s what people have come to expect from Kansas City coffee,” said Bricker.

The coffee menu is meant to be accessible. Messenger Coffee is batch brewed for those that just want a cup while Splitlog also offers espresso-based drinks: lattes (iced or hot), cappuccinos, and Americanos. They’re also serving pourovers and toddy coffee.

Bricker, who won the National Latte Art Championship in 2014, is partial to the Hit and Run — a shot of espresso to stay and a 12-ounce cup for the road (those in the drive through can order a ‘Red Eye,’ where the shot is dropped in the cup).

“[The Hit and Run] is my favorite drink. It had to be on the menu,” said Bricker. “It’s what I order when I go to a new coffee shop.”

Bricker — who worked as a barista trainer and quality control manager for The Roasterie — is in the process of building out the coffee program. He’s looking to feature a different roaster from around the country each month to complement the choices from Messenger. First up (and likely behind the bar this week) is a trio of coffees — Kenyan, Ethiopian, and Spring Break Blend — from Per’La Specialty Roasters in Miami, Florida. The view from the tables outside of Splitlog Coffee. (Jonathan Bender | Flatland)

The pastry case on the brew bar is stocked with baked goods from Hana’s Donuts and SunFlour Bakery, both based in Kansas City, Kansas. Sunflower bakes an assortment of muffins, scones, and croissants, including one with provolone and dry copa that Bricker recommends pairing with their coffee offerings. Softball-sized cinnamon rolls are available (although you’ll have to find your own microwave or toaster if you want it heated up).

Splitlog is open from 6:30 a.m. to 2 p.m. Monday through Saturday. They’ll look to extend their hours in the near future, likely in June. Bricker is also playing around with specialty drinks, considering adding in syrups from Boozy Botanicals, for a seasonal coffee menu.

“People love that city view,” said Bricker. “They just get a cup of coffee, sit outside, and look downtown.”

Best Eat In the House | Slap's BBQ's The Mike Johnson