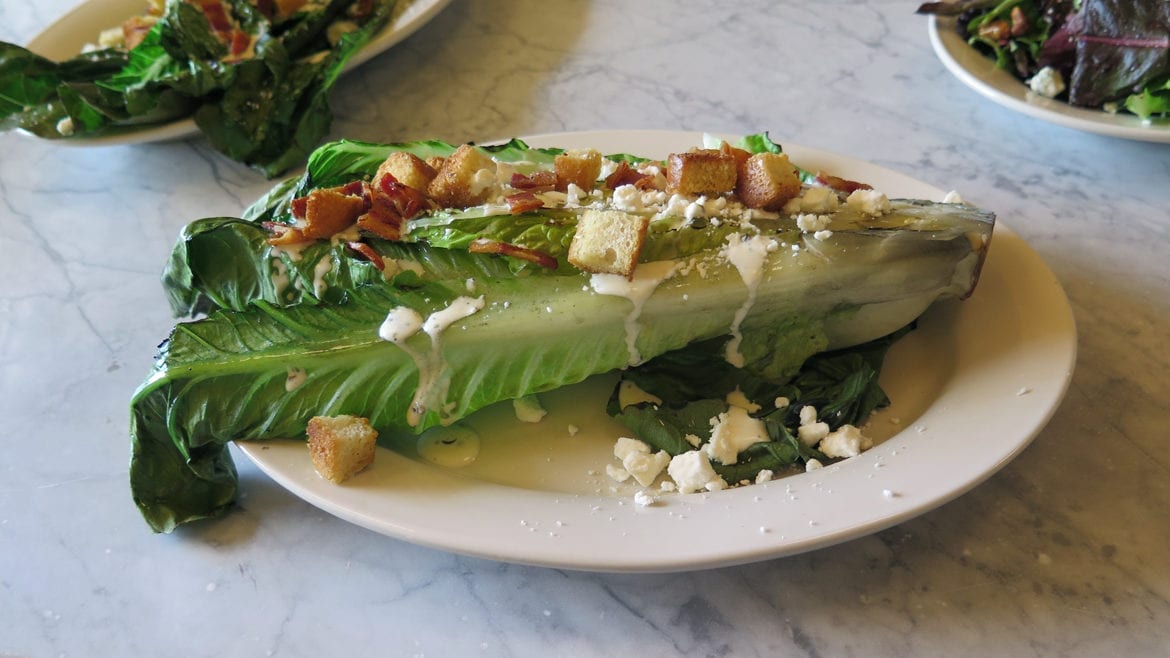 As part of its new kitchen, The Ship serves a grilled romaine salad with bacon and feta cheese. (Pete Dulin | Flatland)
Share this story

Three years after it set sail in the West Bottoms, The Ship (1217 Union Avenue) has added a kitchen and dining room. The nautical-themed cocktail lounge and live music space also has a new cook: Ernie Locke, a blues harmonica player with a culinary background, who is slinging up pancakes, grilled romaine, and a muffaletta.

Over the past six months, Mobley and Asher have converted a room in the back of The Ship into a full-service kitchen. Eight diner-style counter seats are positioned at a marble countertop in the open kitchen. An additional room between the kitchen and bar seats a dozen people.

“The countertop came from the Dixie Belle,” Mobley said, referring to a former bar in the Crossroads. “Originally, the countertop was used at the Muehlebach Hotel.”

Customers can order dinner and snacks from the kitchen and food is served in The Ship’s main bar area. Seating in the diner and adjacent room will be phased in later this spring. The full menu is offered Tuesday through Saturday, 6 to 10 p.m., with late-night snacks available until midnight on Fridays and Saturdays.

“As soon as we have dinner running smoothly, we’ll expand to lunch hours, 11 a.m. to 10 p.m., sometime in the summer and roll out barbecue shortly afterward,” Asher said. “A Sunday Soul Food Jazz Brunch will begin in time for the holidays.” Ernie Locke chars romaine lettuce on the grill for a salad from The Ship’s new menu. (Pete Dulin | Flatland)

Mobley and Asher enlisted the cooking expertise of Locke, who will manage the kitchen and prepare food with homestyle and Southern influences. Locke, known locally as a blues harmonica-playing lead singer and veteran of Kansas City’s late ’80s and ’90s music scene, led definitive rock bands Sin City Disciples, Tenderloin, and Parlay. He moved to Tampa, Florida, in 2001 and opened Ella’s Americana Folk Art Cafe in 2009. He returned to Kansas City in 2016 and connected with Mobley and Asher.

After introducing Tampa to Kansas City’s hearty food, Locke is bringing some of his down-home soul meets Southern-style dishes back to the Midwest. Soul Food Sundays at Ella’s featured twists on staples, such as fried chicken and waffles with bourbon maple gravy. At The Ship, Locke’s menu will include burgers, including a vegetarian option, prepared on a grill or flat top. Night Breakfast, as it’s billed on the menu, includes buttermilk biscuits with sausage gravy or a stack of three blueberry or gingerbread pancakes. Other selections include fried pickles, a Tampa-style Cubano sandwich with mojo pork, a meatloaf sandwich with Locke’s secret gravy, an authentic New Orleans-style muffuletta sandwich, and lighter fare including salads. The Dog House Salad has goat cheese, salmon, and an unusual back story. (Pete Dulin | Flatland)

“I was standing behind three guys in line at the grocery store in Tampa,” Locke said. “They each had the same items: spinach, asparagus, portobello mushrooms, and salmon. They were making salad for their wives because they were in the dog house.”

The Ship celebrated its third anniversary on May 15th. Owners Josh Mobley and Bob Asher relaunched the historic bar in 2014 after spending nearly a decade reconstructing it. The bar originally opened in 1945, post-Prohibition, at 411 E. 10th Street near the municipal courthouse in downtown Kansas City. The interior decor and furnishings resembled a wooden ship. Patrons included judges, politicians, mobsters, and prostitutes. The Ship operated for nearly 60 years before it closed in 1993. Before the building was demolished to make room for Ilus Davis Park, The Ship’s furnishings and decor were salvaged by developer Adam Jones and others. Mobley and Asher recovered The Ship’s treasure in 2004 from a West Bottoms warehouse and began rebuilding the bar in its current home.

Missing Ragazza? The Italian Eatery Pops Up In The West Bottoms & Other Weekend Possibilities

From the Still to the Barrel