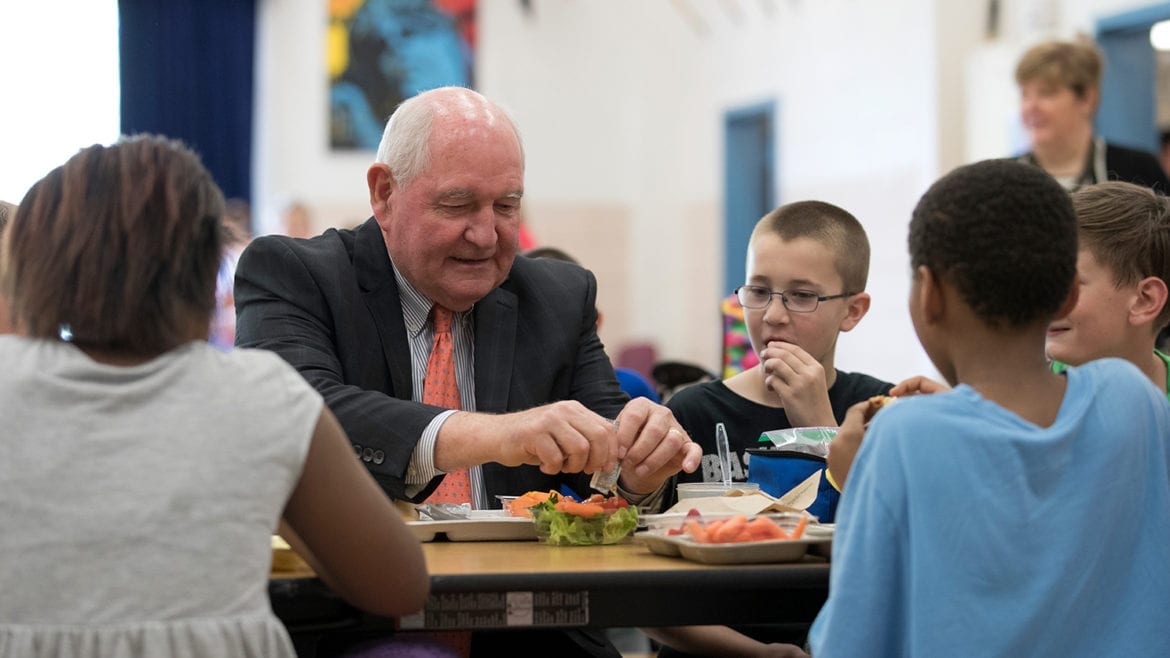 The Trump administration has said it wants to remove burdensome regulation, and on Monday it served up a taste of what that looks like when it comes to two aspects of food policy: school lunch and calorie labels on menus.

Agriculture Secretary Sonny Perdue announced a plan to delay a mandate that would require schools to further reduce sodium levels in the meals they serve. In addition, Perdue wants to give the green light to schools that want to serve some grains that aren’t whole-grain rich.

“We all know that kids are pretty outspoken about what they want to eat and what they don’t,” Perdue said, adding, “We’ve got to balance the nutritional aspect with the palatability.”

He told a crowd gathered at a school cafeteria in Leesburg, Va., that he’s listened to kids, parents and school administrators, many of whom have been pushing for more flexibility in implementing nutrition standards that were enacted during the Obama administration.

The news brought the ire of many nutrition and child-welfare advocates who view these changes as a roll-back of the reforms championed by former first lady Michelle Obama.

“Just because children would rather eat heavily salted, processed foods at school doesn’t mean they should,” Ken Cook, president of the Environmental Working Group, said in a statement. “The president’s fondness for Big Macs and KFC is well known, but we shouldn’t let Colonel Sanders and McDonald’s run the school cafeteria.”

Howell Wechsler, CEO of the Alliance for a Healthier Generation, which has worked with more than 35,000 schools to implement healthier meal standards, said in a statement, “We would not lower standards for reading, writing and arithmetic just because students found them challenging subjects, and we should not do it for school nutrition either.”

But Perdue’s decision was cheered by the School Nutrition Association — which represents school cafeteria administrators (or meal program operators). The group had lobbied Congress for more flexibility in applying federal nutrition standards.

In a statement, SNA CEO Patricia Montague said the group was “appreciative of Secretary Perdue’s support of school meal programs in providing flexibility to prepare and serve healthy meals that are appealing to students. ” A placemat with nutritional information on a tray at a McDonald’s restaurant in San Rafael, Calif. California was the first state in the U.S. to require chain restaurants to reveal calorie information on standard menu items. The law went into effect in July 2009.

Meanwhile, the Trump administration put a halt to another Obama-era regulation. A federal rule that would have required chain restaurants and other food retailers to post calorie information was supposed to take effect May 5. But late Monday afternoon, the Food and Drug Administration announced it will delay implementing the rule until May of next year.

The mandate to post calorie counts was written into the Affordable Care Act in 2010. Several years ago, some chains — including McDonald’s and Panera Bread — began to display calories on their menus. Calories are often posted on pastry shelves at coffee shops as well.

Margo Wootan of the Center for Science in the Public Interest is an advocate of calorie labeling because she says it makes people more aware of what’s in their food.

“[There are] 740 calories in this pecan roll,” she says, pointing to a pastry at a local café. “It’s more than the calories in a Big Mac!”

Wootan says studies show that labeling calories can affect people’s choices — and the food industry has taken notice. “A lot of time, even the restaurants didn’t realize how many calories were in many of their items,” she says.

And some chains have added more low-calorie options. For example, “looking at before-and-after menu labeling, we’ve seen a significant decrease in the pastries at Starbucks,” Wootan says.

Cosi and Maggiano’s are also chains that have re-worked menu items — from salads to entrees — to lighten them up, but not all food retailers have come on board.

Attorney Douglas Kantor last month petitioned the FDA on behalf of the National Association of Convenience Stores and the National grocers Association to ask the agency to reconsider the calorie-labeling rule. He says the “regulations have been overly prescriptive and very hard to comply with.”

Convenience and grocery store chains sell a lot of prepared foods — from deli sandwiches and pizza to prepared entrees and a la carte food bars. Unlike restaurants that serve a set menu, Kantor says, it’s a big challenge to nail down calorie counts in in these self-serve venues, where portions and offerings vary.

He says the regulations don’t give these chains a way to comply: “They can’t tell us how to deal with normal variation in food sizes and calorie amounts.”

In a statement, Tom Price, Trump’s secretary of Health and Human Services, said the FDA will also ask for feedback about how to make the menu-labeling rule more flexible and less burdensome, while still providing useful information to consumers.

“Under President Trump, our department will focus on promoting public health in ways that work for American consumers,” Price said.