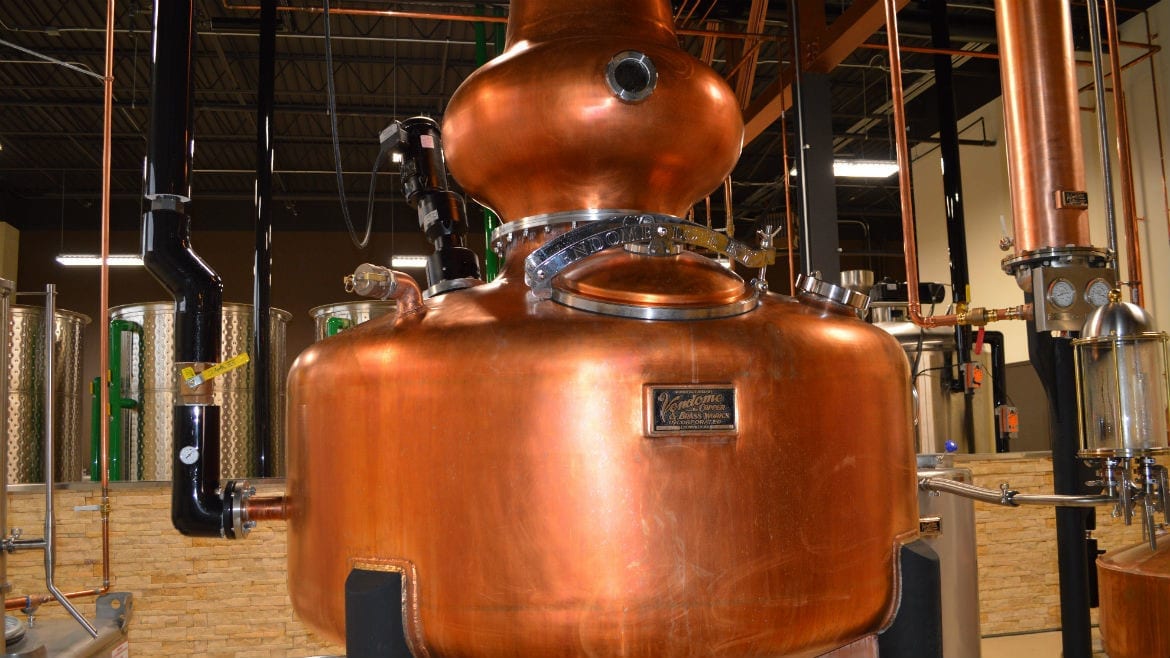 Benay Shannon hops down from a forklift, her bright pink galoshes padding across the concrete floor of the Restless Spirits Distillery. She maneuvers clear plastic tubing to the open hole in the top of a 10-gallon oak barrel. It’s Tuesday afternoon and Kansas City’s only female head distiller is making whiskey.

“This is about making something with character,” said Benay Shannon, a former high school science teacher, who is now running Restless Spirits with her husband Michael Shannon.

The Shannons are opening the doors to the public today. The new distillery, situated in a rectangular brick building across from the Cinder Block Brewery, will launch with vodka before their gin and Irish whiskey come online.

“Benay and I thought we had a cool family story and the chance to do something different with Irish whiskey,” said Michael Shannon. “Most people do a combination of grains, but Irish whiskey is one hundred percent barley. It’s more expensive and difficult, but it’s worth it.”

The distillery takes its cue from Shannon’s family history in Kansas City. His great-great-grandfather was Joe Shannon, a politically influential figure in Kansas City’s 9th Ward during the days of former Mayor Tom Pendergast.

“We wanted to honor the vocations of early Irish immigrants,” said Shannon. “They built things. They were stone cutters, stone masons, and railroad workers.”

The distillery will launch with Duffy’s Run Vodka, which clocks in at 90-proof (45 percent alcohol by volume).

“We wanted to make a 90-proof vodka that doesn’t taste like rocket fuel,” said Shannon.

The rabbit mascot depicted on bottles is also a nod to Joe Shannon’s followers, who were known as ‘rabbits,’ the long-time rivals of Pendergast’s ‘goats.’ Builder’s Botanical Gin (92-proof) and Stonebreaker Blended Whiskey will join vodka on shelves later this spring. Builder’s is meant to get away from the piney flavor of gin that Benay Shannon believes turns off many female drinkers.

“I literally distilled every individual botanical in a test tube one summer,” said Benay Shannon. “There’s juniper and coriander. The lavender and roses are on the nose. There’s dried orange and lemon peel, meadowsweet, grains of paradise, rosemary, and a tiny bit of anise. I don’t like a lot of licorice, but it seemed to lack a little sweetness without it.” 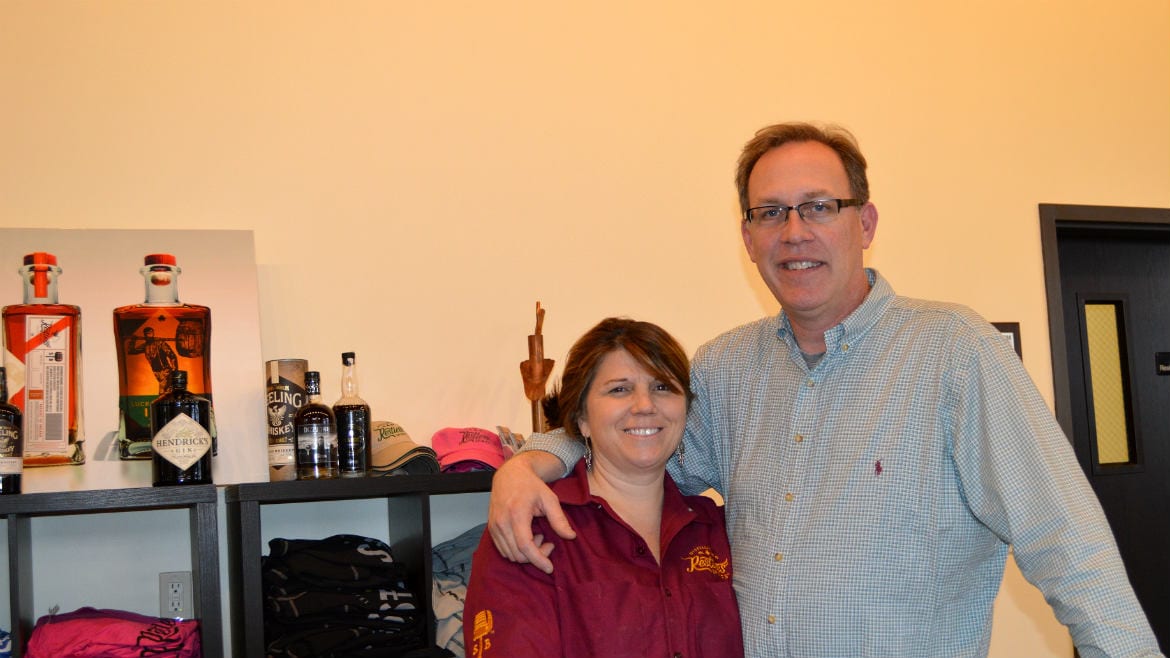 Michael Shannon’s eyes were opened to the craft distillery movement on a business trip to Colorado five years ago. After trying a locally made whiskey, he took a distillery tour, and saw the potential in bringing a similar concept to Kansas City.

“I saw that making whiskey wasn’t complicated from a production standpoint once you got it right. This was a business about branding,” said Michael Shannon.

And branding is his bread and butter. Shannon is a former brand consultant that worked with companies like Bic and Newell Rubbermaid. Over the next several years, the couple immersed themselves in the business side of distilling with classes at Downslope Distilling in Colorado and learned about yeast propagation at White Labs in California.

“I had a background in science, so I was comfortable with the science part of it,” said Benay Shannon. “And he could tell the story.”

The first barrel of whiskey they ever made took a year.

“It had a full flavor complexity that we really weren’t expecting,” said Shannon.

It also convinced them that they were ready to pursue the idea of a distillery in earnest. In 2013, they attended a five-day seminar at Breckenridge Distillery in Colorado, where they connected with master distiller Jordan Via. With his advice on setting up a facility, they hatched a business plan for the production distillery that would take another three years to open.

They acquired their North Kansas City space in February of 2015 and began the build out in June. The 9,000 square-foot space, an empty warehouse shell, was divided into a tasting room with massive windows that look into the distillery.

“I know where every pipe in this place is,” said Michael Shannon. “There are some days when you go, ‘Oh my gosh, what we have done,’ but that’s what whiskey is for.”

A set of fermentation tanks arrived in November and they reached out to Vendome out of Louisville, Kentucky, about building a 500-gallon, onion-shaped, copper pot still specifically designed to produce Irish whiskey. ‘Darby O’Still,’ is the focal point of the distillery.

“Our goal is to make unique spirits,” said Benay Shannon. “It’s interesting to see how everything works together to create a character.”

Restless Spirits will sample and sell bottles out of its North Kansas City distillery. In the coming months, they’ll also hold tours, and offer whiskey tasting and distilling classes. 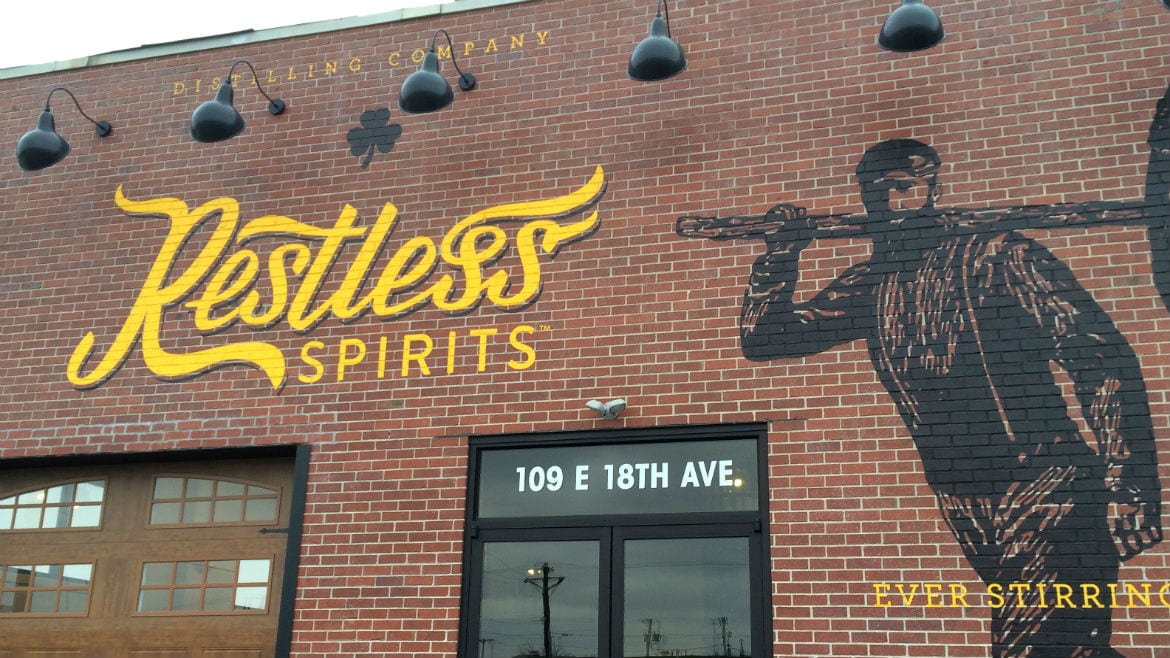