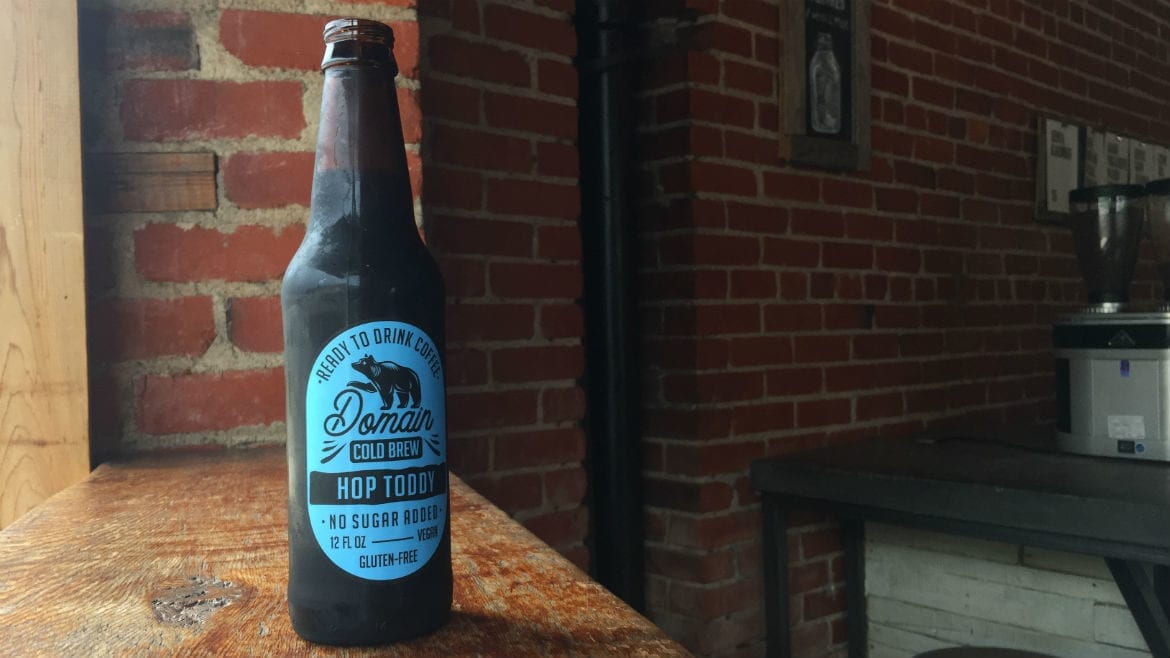 Oddly Correct is now bottling its cold brew as part of a new business, Domain Cold Brew. The hop toddy, one of three flavors (orange blossom and original are the others), is pictured. (Cole Blaise I Flatland)
Share this story

When Gregory Kolsto opened Oddly Correct (3940 Main St.) in 2011, he wanted it to be a force that helped to build community on Main Street. Six years later, he’s thinking a new project might take some of the spirit of Oddly onto shelves nationwide.

“Daniel Lance came into our shop and freaked out on our Orange Blossom cold brew,” Kolsto said. “We needed somebody to fall in love with cold brew, and that was Daniel.”

After several months of conversation, Lance — a cyber security consultant based in Kansas City — convinced the team at Oddly that their cold brew might have a place in the grocery and retail market. And a new business, Domain Coffee Co., was born.

Lance is partnering with Kolsto and Michael Schroeder, who oversees the roasting for Oddly Correct, on Domain Cold Brew, a new ready-to-drink bottled coffee. The new line was inspired by the brown bottles wrapped in a brown paper sack that Oddly has served for the past several years.

“The brown bag bottle was fun, but that was never going to get into grocery stores,” Kolsto said.

The coffee is roasted at Oddly’s shop, but Domain brews and bottles the product at an FDA-inspected facility designed by Schroeder in Kansas City, Kansas. They’ve tweaked their cold brew formula to scale up to a 200-gallon brew tank.

“The original is clean and balanced. Perhaps you’ll get some nut or cocoa,” Kolsto said. “But we’ll change up our single origin offer with the seasons, just as we do with the shop.”

The Orange Blossom is “aromatic and floral,” while the Hop Toddy has all the punch of beer — it’s a hop-infused cold brew — without the alcohol.

By taking the product off site and then stocking the bottles in the shop — the only place Domain Cold Brew is currently available — Kolsto has also freed himself up to explore new options in the Oddly space. He’s thinking about rolling out a breakfast menu, including a bacon, egg and cheese biscuit sandwich.

“We found the freedom to let somebody else run with an idea,” Kolsto said. “I think that’s going to let us flap our wings in some new directions.”

Monarch Gets Ready to Brew in Valentine