Jonathan Bender is in search of Mardi Gras treats 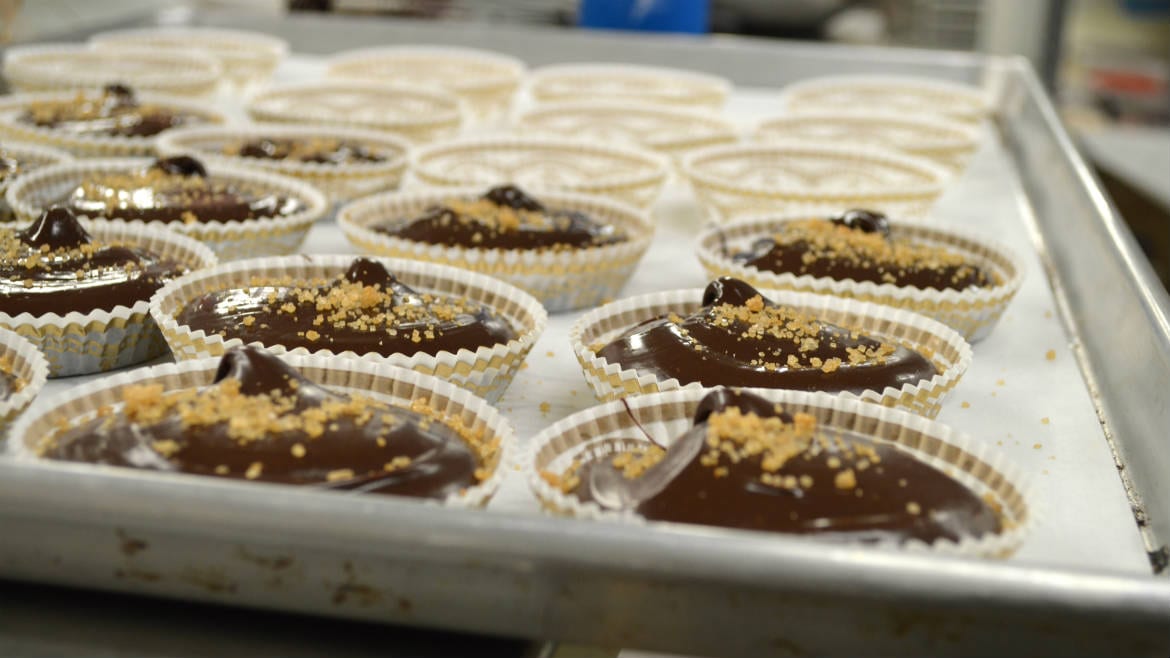 “We just put the babies in the bags,” Natasha Goellner says, gesturing to the five plastic-wrapped cakes on a stainless steel table in her Waldo kitchen.

It’s the Wednesday before Fat Tuesday and the prep area for Lanmou Chocolates is rapidly filling with sweets. The new company, co-owned by Goellner (who also owns Natasha’s Mulberry & Mott) and Megan Piel, is getting ready to celebrate its first Mardi Gras in KC.

“In New Orleans, you can get King Cake everywhere,” Piel says. “I would eat it every day for a month for three years.”

Lanmou’s version of the cake is filled with creole cream cheese, cinnamon sugar and topped with a praline glaze. The eight-inch cakes, dusted with neon yellow, green and purple sugar, are packed with beads, a mask and the baby – a plastic figurine that is hidden in the cake. Tradition dictates that the person who gets the piece with the baby has to host the party the following year and bring the King Cake. 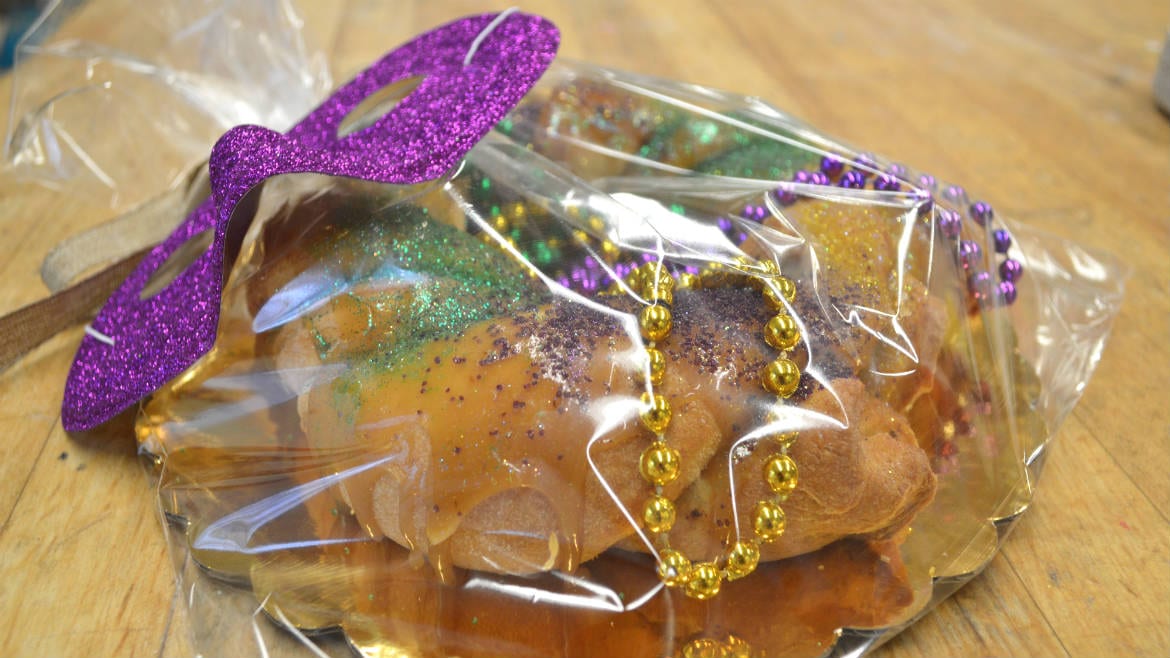 The idea to open a confectionary began when Goellner went to visit Piel in New Orleans. Piel, a former intern at Natasha’s, was working as a pastry chef at the Ritz-Carlton in the French Quarter at the time.

“I fell in love with the city when I lived there,” Piel says. “I came back and I really wanted to show my love for New Orleans with certain flavors.”

“The key is to roast the pecans before you add them to the mixture,” Piel says. “And you can’t overcook your pralines. They need to be smooth and velvety when you bite into them.”

On this day, Piel is making a batch of 50 bourbon pralines for Julep, the cocktail bar in Westport. She neatly pours out the crunchy discs before the sugar has a chance to cool. When she was at the Ritz-Carlton, she’d prepare as many as 500 to 1,000 in a day.

With the pralines set up, Goellner sits on a stool, wrapping each of the molded S’mores chocolate bars, which bear the alligator holding a parasol that is the company’s mascot, in gold foil. The slowly-rising stack looks like something out of Willy Wonka’s factory.

“We do FlutterNuffer bars,” Piel says of their homage to Fluffer Nutters. “They’re dark chocolate made with marshmallow fluff and creamy peanut butter – because that was my childhood. It was one of my favorite sandwiches growing up in Topeka.” 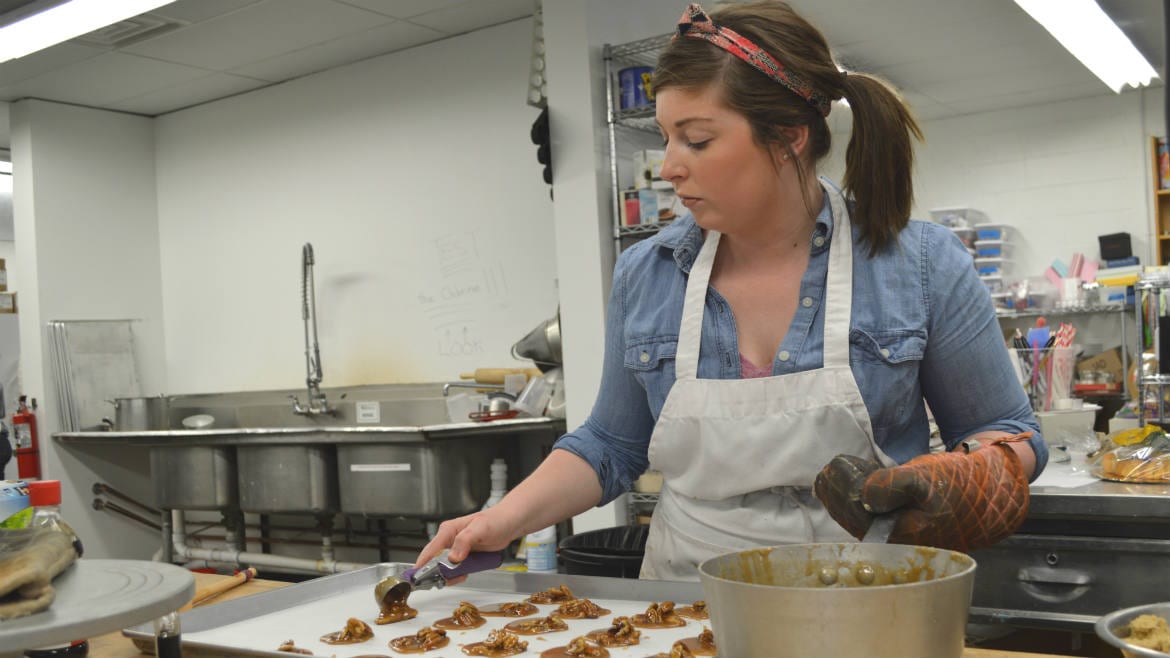 It was marshmallows that inspired the look and Cajun feel of Lanmou. As Piel explains, the fluffy white candy is used by hunters and tour guides to attract alligators in the South. That’s why the confectionary’s marshmallows are known as ‘gator bait.’ They also make jars of marshmallow fluff in flavors like bourbon and maple bacon.

After the chocolate bars are removed from their molds, they’re trimmed to neaten the edges. The trimmings are then combined with leftover marshmallow and toffee and dusted with cayenne pepper for a snack mix that Goellner named ‘Bayou Bites.’

“Everybody loves Chex Mix and this way we’re using everything we make,” Goellner says.

As she continues to wrap bars, Piel tempers a mix of semisweet and dark chocolate for bourbon fudge. The chocolate mixture will be piped into quarter-pound paper cups and then topped with raw sugar that has been infused with J Rieger & Co.’s Kansas City Whiskey. The 18 fudge rounds are rich and a little bit boozy.

“I always hate getting something and expecting it to be so flavorful,” Piel says. “You’re kind of disappointed when that doesn’t happen. New Orleans is big in spirit and in attitude, so that’s the idea.”

The duo are currently experimenting with a wasabi fruit truffle. In the near future, Lanmou will launch an online shop and their chocolate bars will be at the Underdog Wine Co. (319 East 55th Street) beginning this weekend. Piel and Goellner are also working with Thou Mayest on a coffee and chocolate bar collaboration.

“A lot of our ideas stem from the fact that we’re hungry and we want something,” Piel says. “Then we just see if people want to eat it too.” 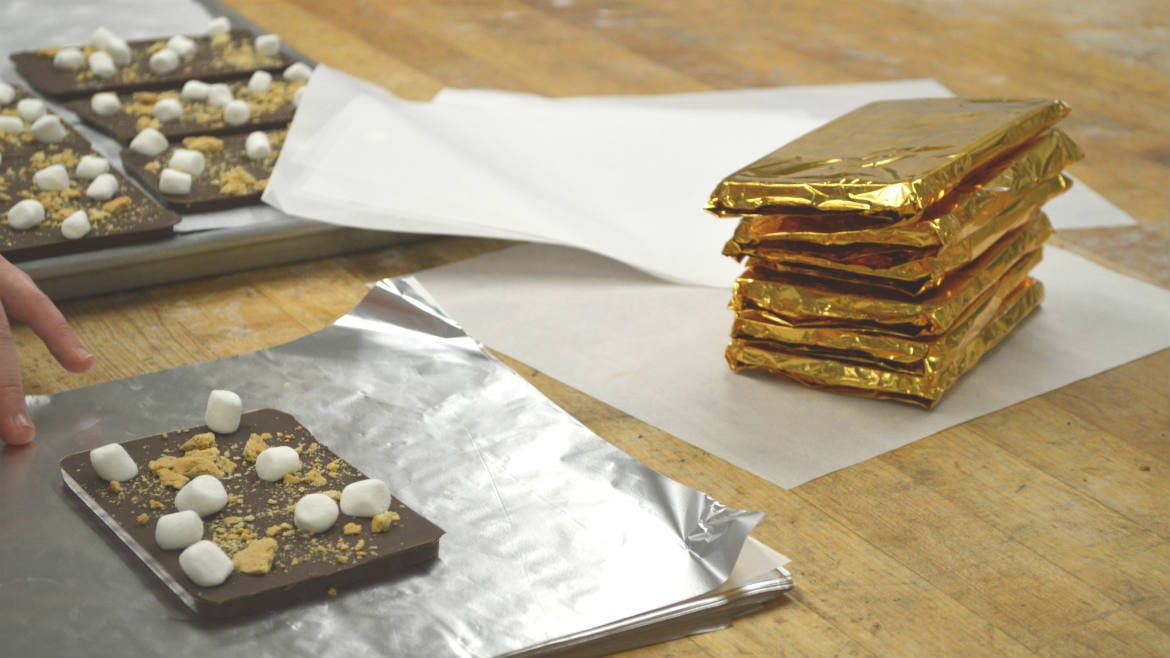