Like most restaurateurs who have survived the pandemic, Chef Zaid Consuegra Sauza of Pirate’s Bone Burgers pivoted, turning his original dine-in concept into a carryout-only model.

His plant-based restaurant in the Crossroads was featured in Bon Appétit before the pandemic and ABC News interviewed him about his status last summer when it appeared his Deferred Action for Childhood Arrival (DACA) might be in jeopardy.

Over the past nine months, Consuegra Sauza whittled down his staff through attrition, leaving a more dedicated team, and streamlined kitchen procedures to stay afloat.

This year also will mark the first time he is participating in Kansas City Restaurant Week (KCRW), which will run Jan. 8-17.

Another first: Diners can search the restaurant week website under “Any Cuisine” then scroll down to “Minority or Women-Owned Business” for a search pulling up options culled from the 173 participating restaurants. The restaurants in the filter self-identify as women- or minority-owned.

“We’re going to take any chance we can get to stay afloat and make it through this pandemic,” says Consuegra Sauza, who was born in Mexico City. “It’s a great opportunity, and we want to be involved in Kansas City’s food scene. We don’t to be forgotten.”

“Restaurant Week needed to evolve to survive and thrive,” says Derek Klaus, director of communications for Visit KC. “We noticed after Black Lives Matter protests that more people were looking for ways to support more diversity… The result is a really great, more diverse mix of restaurant options.”

To further support the struggling restaurant industry, sponsoring organizations waived the $200-300 registration fee, underwriting the costs of marketing and advertising this year. Participants contribute 10% of sales to The Don Bosco Centers.

While KCRW has traditionally had a dine-in focus, plenty of takeout and delivery options were added this year. Pirate’s Bone Burgers, for instance, will offer a variety of vegan burgers with a $15 lunch option (1 burger, 1 regular fry, 1 drink, 1 side sauce) or a $45 dinner for two (2 burgers, 2 orders of fries, including specialty fries, 2 drinks and 2 side sauces).

Popular burger options include a buffalo deep-fried “chicken” burger made of soy and wheat and a ribless barbecue burger that has the texture and bite of a McRib with the “softness and richness” of filet mignon. The made-from-scratch organic and non-GMO sauces Sauza used to buy are now made in-house.

KCRW’s push to encourage more minority- and women-owned businesses to participate is positive in Consuegra Sauza’s book: “I think it should be normalized. I think everyone can benefit with equality and inclusiveness. Is it late? Yeah. Is it a good thing to start? Sure. I’m all behind it.”

Jane Zieha, owner of Bluebird Bistro on the Westside, is an example of a long-time KCRW participant whose restaurant appears under the new filter.

“Visit KC invited me to be a part of it from the beginning and I feel like they have been supportive of my restaurant, and this is something they put their heart into so that is why I do it every year,” she says.

Zieha’s restaurant emphasizes locally sourced ingredients, which often come at a premium. Yet, she has tried to embrace a wide cross section of diners throughout the years by offering options at diverse price points.

“All walks of life eat here,” she says, whether you have $10 or $75 to spend. “I’ve always worked to have organic and natural food available to all classes.”

During KCRW, Zieha will offer $15 lunch and $35 dinner options, as well as wine and cocktails to-go, another perk of the pandemic.

When Fannie Gibson, owner of Fannie’s West African Cuisine, opened in 2018, her then-business partner said she should aspire to participate in KCRW, but he also warned her African cuisine might not be considered a good fit.

“Now look at me! I’m so excited!” says Gibson, who arrived in Kansas City from war-torn Liberia nearly two decades ago and is participating for the first time. She is thrilled to see early reservations for socially distanced dine-in starting to fill up.

Gibson made a trial run during KC Black Restaurant Week in 2020 and admits: “I had no idea what I was doing. I was a hot mess!”

But Gibson has worked many of the kinks out and she is eager to serve customers traditional Liberian fare, including puff puff (a sweet doughnut ball), meat pies, fried spinach, jollof rice, cassava leaf stew with a choice of goat, chicken or beef and egusi soup (thickened with ground melon seeds).

Her favorite dish is peanut butter soup, but she’s eager to find common ground and share her culture with others. “The way we make our collard greens is different from Americans,” she says. “I would like for you guys to try mine.”

Karen Patrice Boyd, the owner and managing chef of Patrice’s Culinary Collective, was ready to rebrand and expand her web-based culinary business at the start of 2020. The pandemic – and a state-funded grant – sped up her transformation from a patisserie (bakery) shop to a more wide-ranging culinary enterprise.

Patrice’s regularly offers options for carryout, delivery and shipping. All meals are packaged in vacuum-sealed packages. To reheat, simply submerge in boiling water.

“A lot of thought went into not only the components, but how to deliver them,” says Boyd, who plans to add culinary classes for all ages, skill levels and dietary persuasions to her repertoire.

When Boyd, who is African American, was contacted by Visit KC with an invitation to participate in KCRW “it was kind of like a perfect storm… I was both humbled and scared to death when they asked me to do this.”

Boyd, who learned to cook the foods of New Orleans from her mother and grandmother, describes her Kansas City clients as “discerning” – “foodies” who care deeply about the quality of ingredients.

Boyd is offering a lunch menu “soup feast” – three courses for two for $15 with a choice of a traditional gumbo, one without seafood and another without pork. For dinner, she is offering a five-course menu, a $50 value, for $35, and includes a choice of turkey roulade, duck confit or spiral ham.

Her goal in participating in KCRW for the first time is to help expand the palates of diners with flavors from “non-Caucasian venues.” “I really want them to expand their horizons. I think the beauty of Restaurant Week is to explore something you might have been a little hesitant to try before,” she says.

Although Urban Café’s Justin Clark, a 33-year-old African American professional chef, has participated in restaurant weeks in other cities, he was “kind of nervous at first” to jump in. “I didn’t think anyone was going to come,” he says, but dinner-only reservations have started to pick up.

“It feels like I never got a fair shot,” says Clark, who, with his wife Rashaun, reopened an expanded concept in a new location on Troost Avenue near the University of Missouri Kansas City weeks before the pandemic hit.

Urban Café’s $35 KCRW menu includes such entrée choices as steak frites, vegan cauliflower steak or chicken Oscar, a dish that Clark introduced to diners when he was the chef de cuisine at The Westin Hotel featuring an airline chicken breast with lump crab meat and béarnaise sauce.

Clark and his wife were featured on an NBC Nightly News special in 2018 focused on Troost Avenue as an historical cultural and socioeconomic dividing line. He hopes his participation in an established mainstream dining event such as KCRW will help him further break down the dividing line.

“I’m still trying to break that curse, but so far we’re getting a good response,” he says, adding that Nextdoor, a hyper-local app, recently named Urban Café a 2020 “neighborhood favorite.”

“What I plan to do with Urban Café is make it a staple and a symbol that change and diversity can bring people together,” Clark says.

Jill Wendholt Silva is a James Beard award-winning food editor and freelance writer. Among her many food-related pursuits, she is the co-host of the Chew Diligence podcast. You can follow her at @jillsilvafood. 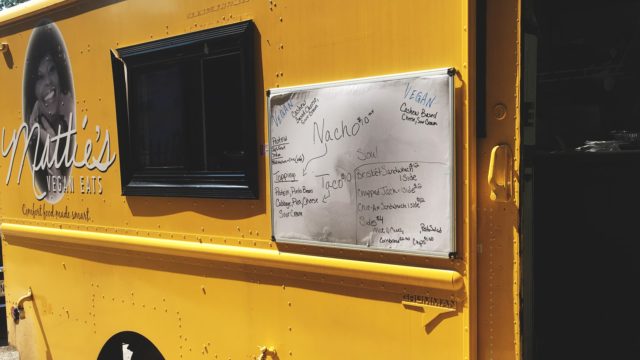 A Brigadeiro Just Might be the Perfect Valentine’s Day Treat

Watch How They're Made

Making the Most of Your KC Restaurant Week Carryout Experience