The Joy of Cooking With Beer 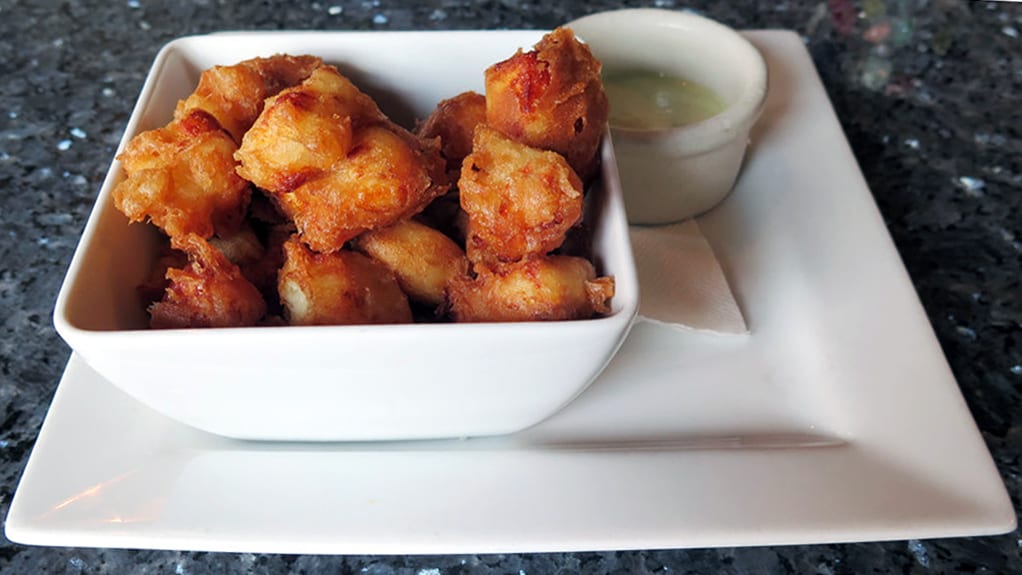 The beer-battered cheese curds at The Farmhouse incorporate Pabst Blue Ribbon into the batter. (Pete Dulin I Flatland)
Share this story

Beer has long been overshadowed by wine as a cooking ingredient. Traditional French cooking techniques incorporate wine into sauces, braised meats, and other preparations. Now beer is getting its due turn not just as a drink to pair with food, but also as a key ingredient to prepare dishes.

These examples from chefs might inspire cooks at home to open a bottle or can of suds for use in the kitchen.

“When Michael and I were coming up with ideas for the opening menu, we noticed that ‘arancini’ was a hot trend on a lot of chef’s menus,” said Kelpe. “Arancini is an Italian appetizer of small crispy fried balls of rice usually made with creamy risotto. We tried to reinvent the popular appetizer with a slightly ‘red-neck Southern’ spin.”

They came up with hushpuppies, made with Anson Mills grits and Tillamook cheddar, and topped with charred jalapeno jelly.

“I wanted a cheesy sauce underneath, but Michael felt that the dish needed a slightly acidic sauce to counterpoint the creamy-cheesy grit fritters,” said Kelpe. “He created a beurre blanc sauce, which is a French white wine butter sauce. Instead of white wine, he used a good yard beer, such as Schlitz, and we renamed it beer blanc.”

Kelpe shares the backstory behind the English-style beer’s name.

“In the summer of 1858, Main Street in Kansas City was overrun by hogs,” said Kelpe. “The city passed a ‘Hog Law’ authorizing the city’s marshall to catch any of the porkers found roaming in the streets and throw them in a ‘Hog Pound.’ Hundreds of swine were apprehended and their owners had to pay fines for their release.”

Chef Ted Habiger, co-owner of Brewery Emperial (1829 Oak Street), prepares a sauce from the brewery’s malty, slightly smoky porter. The sauce tops a tri-tip steak sandwich along with caramelized onions, manchego, and horseradish aioli. Naturally, the porter or a crisp pilsener complements the sandwich and French fries served on the side.

“This recipe uses Martin City Brewing’s own Abbey Ale,” said Kyle. “We use it along with a touch of honey to round out the brine of corned beef. The two complement each other well and have been a staple of Martin City’s Original Pub for years.”

Pre-heat the oven to 350 degrees. Roughly chop the carrots, celery stalks, and onion. Place vegetables in the bottom of a deep baking dish.

Place the corned beef brisket flat on top of vegetables. Add the honey, beer, peppercorns, and bay leaves on top. Wrap dish tightly with aluminum foil and braise in the oven for six to eight hours, or until tender. Once done, let rest for 20 minutes (or cool completely) before slicing and using in sandwiches.