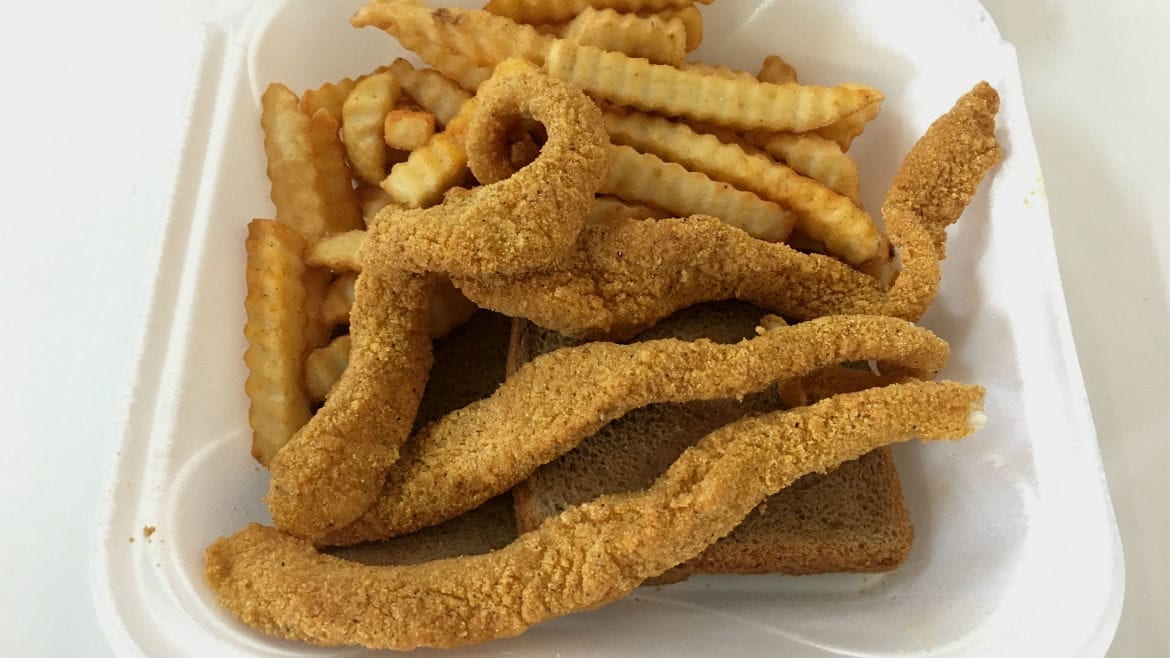 Get yourself a half-pound of fried catfish (or more) at Lufti's if you're feeling like a taste of Nashville this weekend. (Jonathan Bender | Flatland)
Share this story

If you don’t want to root for the Tennessee Titans, the first round opponent of the Kansas City Chiefs, that’s completely understandable. But that doesn’t mean you have to shun the foods of Nashville. We’ve got plenty of the top Nashville hits right here in KC.

You can get a stack of pulled pork on a bun in Nashville, but here we’ll just go ahead and give you the whole pig between two slices of bread. Woodyard Bar-B-Que (3001 Merriam Lane, Kansas City, Kansas) has the Triple P: a heap of pulled pork, ham and smoked bacon topped with melted provolone. Carnivores can also take note of hot chicken, which has become a Tennessee export. EJ’s runs a hot chicken fried special now and again, but we also have an outpost of Gus’s World Famous Fried Chicken (2816 W. 47th Ave., Kansas City, Kansas).

Recipe | Megan Garrelts’ Lemon Meringue PieYou may cheat with a cookie exchange or a bit of peppermint bark, but if you want to bring the whole family to the table during the holidays, it's time you learned to bake a pie. In order to get…

First, there was the Wiener Wagon, a mobile cart slinging hand-stuffed sausages at the downtown Overland Park Farmers Market. You can now add the Wiener Kitchen into the mix. The new breakfast and lunch spot from David Derr and Jessica Rush is right around the corner from the farmers’ market at 9645 W. 87th St. in Overland Park, Kansas.

If you’re feeling like breakfast, opt for the Bacon Sausage, which comes smothered in sausage gravy and can be topped with a fried egg or hot sauce. For lunch, dive into a chili cheese dog (covered in chorizo black bean chili) or vegetarians can find love with the spice-roasted carrot (a blackened organic carrot with pickled onion and toasted pumpkin seeds). The sausages are served on buns from Sasha’s Bakery.

Tom’s Town Distillery (1701 Main St.) has four tours on Saturday (2:30, 4:30, 6:30, 8:30 p.m.). Learn about the spirits made by Tom’s Town during the hour-long tour ($10) and then check out its new winter menu, which launched at the end of December, in the tasting room. Consider toasting with the Pinky Blitz (vodka, blood orange, ginger shrub and ginger beer).

It’s never too early to prepare for a Chiefs’ playoff game. Consider an alternate take (read: indoor) on tailgating with the Founders CBS Pancake Breakfast at Grinders Stonewall (10240 Pflumm Road, Lenexa, Kansas). It’s pancakes paired with the big breakfast stout that’s aged in bourbon barrels where maple syrup has also been aged. Breakfast kicks off at 11 a.m., and it’s a while-supplies-last kind of thing.

The only way to combat the cold is perhaps to fill yourself with so much crab that you simply no longer care about mundane everyday things such as weather. Jax Fish House & Oyster Bar (4814 Roanoke Parkway) has its Bottomless Crab Brunch from 10:30 a.m. to 2 p.m. on Sundays. Munch on Dungeness and snow crab served with butter and lemon. There’s also an option for bottomless mimosas or bloody marys.

All The Pancakes, All The Coffee & Other Weekend Possibilities