Quay coffee reaches out for a roast from St. Louis to bring the toddy back to its menu 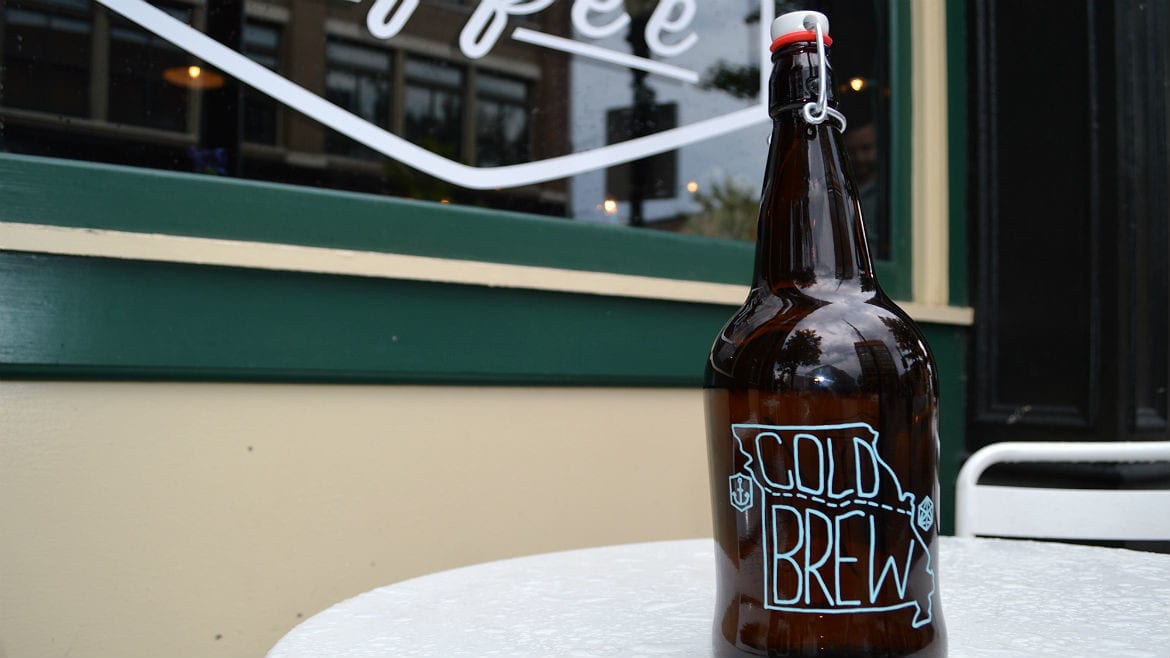 Kansas City and St. Louis are developing an esprit de café. Over in the River Market, Quay Coffee will bring back its I-70 toddy collaboration today. It’s a cold brew — coffee grounds that are soaked in cold water — available by the glass or in 16-ounce growlers, made with coffee beans roasted by Blueprint Coffee out of St. Louis.

“Their roast style is a light roast. It’s very clean, not oily. You’re still able to tap every note in the coffee,” Quay Coffee owner Cory Stipp said of the decision to work with Blueprint. “We’re trying to merge these two coffee cities and I think this is a great bridge. Both places are at the forefront of coffee right now.”

As summer slips away, Stipp watches a barista prepare a series of vanilla lattes – the frothed milk slowly and artfully poured. The dark wood tables in the bustling coffee shop hold a mix of warm and cold beverages – a liquid version of the weather forecast. The lattes are joined by coffee from the Kyoto dripper, a Japanese method of cold brew that uses an hour-glass shaped set-up to slowly drip cold water over a bed of coffee grounds, served over a large square ice cube in a tumbler. One might easily mistake it for bourbon.

The I-70 toddy collaboration is the latest in a series of cold brew options to debut in Kansas City this summer. Second Best Coffee in Waldo and PT’s Coffee Roasting Company both serve nitrogenated cold brew coffee out of a tap. Oddly Correct in Midtown has its Hop Toddy in brown bottles wrapped in letterpress-stamped brown bags – a current seasonal special has an orange blossom infusion. Parisi Café continues to push the flavor envelope by aging green coffee in bourbon barrels and mixing cold brew with house made tonic water. Post Coffee Company in Lee’s Summit began selling toddy in growlers this June. And the Torn Label Brewing Co., which opened its taproom last month, uses nearby Thou Mayest’s cold brew in its House Brew, a wheat stout.

“Cold brews can be found everywhere now, from successfully nitro tapped choices with a silky texture to being used in a lot of coffee cocktail and mocktails,” said Jason Burton, founder of The Lab and the Caffeine Crawl. “I’ve personally had more exciting cold coffee drinks in the last six months than I had the previous nine years combined. You can actually get a really good cold coffee drink that’s not sweet, weak, or bitter like the old days. You know, like 3 years ago.”

This spring, Stipp approached Mike Marquard, the owner of Blueprint Coffee, about working on a toddy together. After tasting three different coffees, Stipp tried the Asde Café from Guatemala and knew that was the right bean.

“The goal was to create a nice bright toddy. It was just clean and ready to go,” Stipp said. “Sometimes coffee can get muddled with a toddy, but this stayed juicy and citrusy. And the growlers are gorgeous.”

Quay brewed 25 pounds of coffee last month and sold out shortly after it appeared on the menu. To make a batch, they soak coarse coffee grounds in cold water for 12 hours. The resulting coffee concentrate is then cut with water.

“If you drank it straight, it’s super caffeinated and you’d have to go outside and run around,” Stipp said.

The I-70 collaboration will be available through the end of September. In the shop, they’ll serve it on ice and likely try some orange zest infusions. It will also be available in 16-ounce glass growlers. For those that take it to go, Stipp recommends pouring six to eight ounces over ice.

The owner of Quay envisions this as an annual project, something that could help bring different coffees from other cities to Kansas City. He name checks Kuma Coffee out of Seattle, Washington, and the Supersonic Coffee Company in Berkeley, California, as collaborators he’d like to reach out to in the future.

“There’s so much good coffee and camaraderie among shops in Kansas City,” Stipp said. “We just wanted to have something a little different and I love the fact that with the I-70 series we’re both Missouri.”

Want to keep reading on coffee? From farmers markets to brick-and-mortar, originally published May 28, 2015, follows the Lee’s Summit brew house, from Quay co-owner Tanner Stevens, as it gains momentum in the community.