(Shhh... We're Not Supposed to Talk About It) 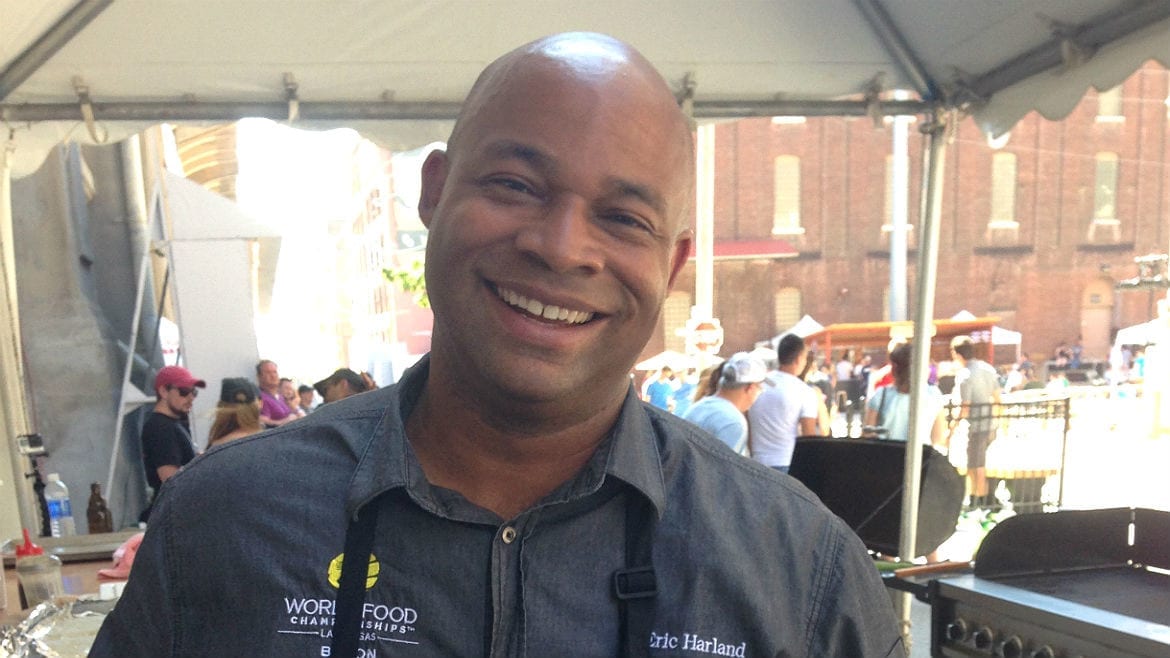 The knives are about to come out in Kansas City. The pots and pans and spatulas will get a turn, too, when Culinary Fight Club Kansas City – a live competitive cooking event with roots in Chicago – launches in April. Think of it as “Iron Chef,” for home cooks with a live audience, secret ingredients, a panel of celebrity judges, and one hour to whip up a dish.

“There’s this melting pot of talent in Kansas City,” said CFCKC organizer Eric Harland. “But it’s quiet outside of Kansas City. We have talented cooks, but we don’t scream about it.”

Harland, 45, is looking to tap into the undiscovered cooking talent in Kansas City because he considers himself just like them. Three years ago, he was working at Evolv Solutions, his family’s document management and information technology company. He was the vice president in charge of marketing (a title he still holds today), when he convinced his older brother Kevin and a friend to form a team for the American Royal World Series of Barbecue. His first competitive cooking event was the largest barbecue competition in the world.

Mad Pig BBQ failed to set the competitive barbecue circuit on fire, but Harland’s smoked chicken earned him a series of calls (the top prizes in competitions wherein a team representative is ‘called’ to the stage). Those ribbons and a bit of prize money convinced him to start looking for other arenas where he could compete.

He discovered recipe contests online, where food manufacturers offer up cash or trips for creative uses of their products. His talent with guacamole and bacon earned him a trip to the Super Bowl last year and an invitation to the World Food Championships.

“You have to be able to cook and you have to do something different,” said Harland. “Judges want something they’ve never seen with a story behind it.”

Self-dubbed the ‘largest Food Sport event in the world,’ WFC has been held for the past five years with competitors in nine categories ranging from seafood to dessert to bacon. Last year’s winners were Cheryl and Loren Hill from Overland Park, Kansas, who compete on the competitive barbecue circuit under the team name of ‘The Smoking Hills.’ They took home the grand prize of $100,000.

“That’s when I realized competitive cooking is bigger than I thought,” said Harland of competing at WFC. The graduate of Blue Valley North and current Olathe resident decided to bring the competitive cooking world to Kansas City. The original Culinary Fight Club began in Chicago four years ago. CFC’s founder Jiwon McCartney is partnering with Harland on the Kansas City chapter. While the series moves between restaurants and venues in Chicago, Harland intends to use the same location for the CFC events in Kansas City. He’s currently working to finalize an agreement on a space.

“Chicago was where I was exposed to cultural differences and international food and flavors,” says Harland, who lived in Chicago with his wife after graduating from Kansas State University in 1993.

The competitive cooking events have been held in Atlanta the past two years and will be popping up across the country on a multi-city tour in 2016. The events also have a charitable component with 25 percent of the profits from CFC Kansas City going to Fight2Feed – an innovative non-profit that distributes meals to the homeless via food trucks.

Culinary Fight Club makes a hard distinction between home cooks and chefs. If you’ve attended culinary school or make a living in the kitchen, you’re a chef. If you’re the person that bakes or cooks for every party, but has only been a diner at a restaurant, then you’re eligible to compete.

“We want talented cooks that can take it to the next level,” said Harland. “We want somebody who thinks their lasagna can beat Jasper’s lasagna.”

Three teams of home cooks will have one minute to grab produce for a pantry that they will have to use alongside a secret ingredient picked by Harland. They’ll have an hour to cook before four guest judges will decide the winner. In addition to what Harland terms, “bragging rights,” the winning contestant will also get a chef’s coat, knife set, and a ‘Golden Ticket,’ an invitation to compete in the World Food Championships this November.

“There’s the joy of competition,” said Harland. “And once you do one, you’re in it forever.”