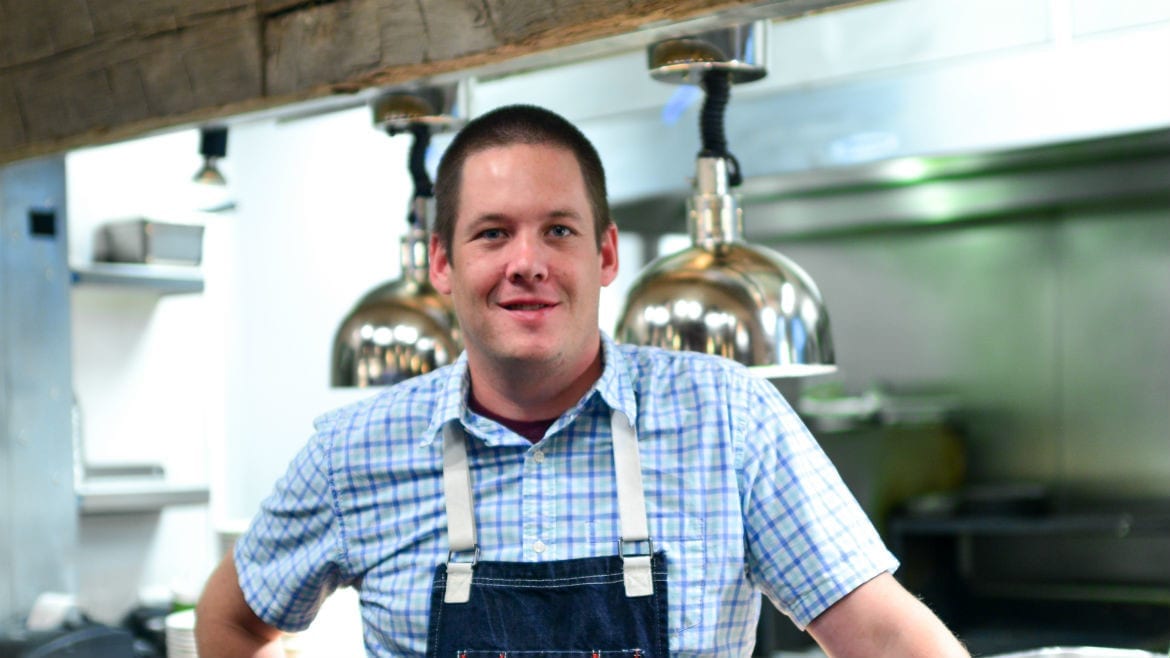 The torch was quietly passed at Rye in January. Co-owner Colby Garrelts – the only name that has ever been at the top of the kitchen ladder at the Leawood restaurant – promoted John Brogan from chef du cuisine to executive chef.

It was a quiet move – the fried chicken dinners and hanger steaks still flew out of the kitchen as Rye did right around 3,000 covers during Kansas City Restaurant Week last month – but an important one in the local restaurant landscape as an established, nationally-recognized chef made the decision to formally turn the reigns over.

Brogan, 35, grew up in Hinsdale, Illinois, a western suburb of Chicago. His mom was the cook in the family, serving up Salisbury steak and chicken and dumplings. He would always make the mashed potatoes.

He got his start in seafood at 17 years old. Brogan was a butcher at a seafood market, learning to break down whole fish, while working the fry station at Pappadeaux Seafood Kitchen. The restaurant would serve as many as 700 people a night with a line of 10 cooks. For nearly four years, he worked 70 to 80 hours a week and loved it.

The warm weather and culinary scene in Charleston, South Carolina, drew Brogan to the College of Culinary Arts at Johnson & Wales. He graduated in 2001 with a degree in culinary arts and added on a bachelor’s in food service management several years later. Charleston provided his foundation in the kitchen as he accrued experience in banquets and baking, while earning his first sous chef title at Hominy Grill.

After culinary school, Brogan moved back to Chicago. One of his good friends was a firefighter in Kansas City and invited him for a visit. It opened his eyes to what was happening in KC and he set his sights on working at Bluestem – the eatery owned and operated by Garrelts and his wife Megan, a pastry chef. Unfortunately, they weren’t hiring at the time.

Brogan spent nine months on the line at 40 Sardines before Garrelts called him about an opening at Bluestem. That was 2007, and Brogan has been in one of Garrelts’ kitchens ever since.

On a recent Thursday afternoon, while a local farmer weighed out produce with a scale on the top of his car in the parking lot and a trio of businessmen in suits sat at the bar discussing a property deal with enthusiasm, we sat down with Brogan to learn a little bit more about what’s next for the new head of Rye.

What’s it mean to you to be named executive chef?

It’s flattering. Colby [Garrelts] is one of my best friends, even if he still has that boss mentality. He’s someone I can call and ask anything. He builds people up and wants them to go on and do better things.

I knew that I didn’t want to be a line cook at 50. Now with being an executive chef, I’ve hit almost all my goals. People ask when I’m going to open my own restaurant, but the timing isn’t right now and I’m not actively pursuing that. I’ve got the opportunity to work for someone who is awesome and be a part of something that is just as cool as [opening my own restaurant].

You’ve been at Bluestem/Rye for eight years and were alongside chef Garrelts when he won a James Beard Award in 2013. Can you talk about that ride?

They’ve always given me another opportunity and kept it exciting, which keeps [my job] from getting stale. I remember we spent most of the summer of 2012 in this space. Colby and I dragged every piece of equipment out of the kitchen and pressure washed the walls and cleaned the patio. They named me chef du cuisine immediately and then executive chef [this] January.

Whether you’re winning or not, when the people are winning around you, it’s pretty awesome. You’re in this room at the Beards and it’s the Academy Awards of cooking. You see chefs who you’ve followed or read their books or seen on Eater. And then to see Colby and Megan get that recognition, you get to see why they do all the work they do.

How would you define Rye?

Rye is the place that I would love to hang out. It’s food with a Midwestern feel and we’re able to experiment with Southern flair. It’s the low country culture that I came up in Charleston. [Brogan has consulted and helped develop the Southern-inspired food menu at Julep.]

We change the menu seasonally, but we have our core. There’s fried chicken and some of the staples of Bluestem’s lounge menu: the hanger steak with frites, shrimp and grits, and our trout. What I love about working with Colby is that he takes a lot of what he saw in Kansas City, a lot of old school stuff, and brings it back. It’s steak night or prime rib, the things he would have when he went out with his dad.

What excites you about the menu at Rye? People get excited about something on the menu they haven’t tried. I love the weekly specials and our beer dinners. It’s the chance to use seasonal produce. This summer we brought in a bunch of quail and made a sweet potato cornbread. It’s like a cross between a stuffing and a soufflé. It has the texture of moist fluffy cornbread.

You roast the sweet potatoes and make a polenta with buttermilk and corn meal. You fold the sweet potatoes in with a little honey and cinnamon. Fold in egg folks and whip a bunch of egg whites. Then you bake it so it rises up. You let it cool slightly and then punch out rings with a small biscuit cutter.

Then we pan roasted quail with salt and pepper. I took the quail out to rest, then I threw shallots in the pan with bell peppers and garlic. I deglazed the pan with white wine then added cream, crawfish tails, parsley, chives, thyme, and a whole bunch of fine herbs. Then I spoon over the space and the spoonbread soaks it up. You get this earthiness from the crawfish and game from the quail, along with a little lemon.

What advice would you give to aspiring chefs?

When people tell me they want to be a chef, I tell them to leave Kansas City and go to the coast or see a different region. Travel, and everywhere you go pick a restaurant and hit it up. The most important thing is to get out there. I moved around — the Southwest, Chicago, Charleston, and all the little spots in between. It developed who I am and what I do.