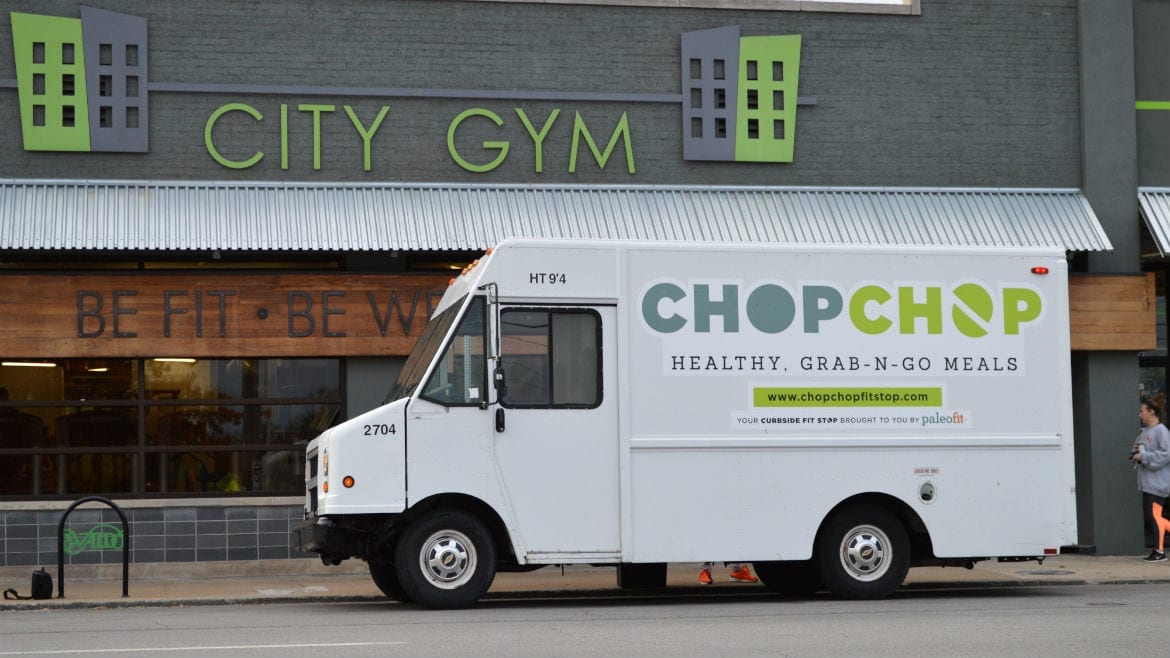 As part of its regular rounds, Chop Chop FitStop parks outside of City Gym on Tuesdays and Thursdays. (Photo: Jonathan Bender | Flatland)
Share this story

Graham Ripple puts out the menus and napkins on the metal counter in front of the window of Chop Chop FitStop, his new food truck dedicated to pre-prepared, Paleo-inspired meals.

The food truck, which Ripple runs with co-owner David Lueck, is stocked with Simple Science Juices, protein balls, and chicken enchiladas with cauliflower rice. The hunters stalk him on Instagram, while the gatherers are inside the nearby City Gym on the elliptical. It’s a little after 4 p.m. on a recent Tuesday in Waldo and the four-week-old Chop Chop FitStop is open for business.

“With a typical food truck, you might order from a limited menu and then they’ll cook it on the spot. You wait 10 minutes and then you get your meal,” Ripple said. “With us, everything is fully prepared ahead in the kitchen. We keep our daily special warm and chilled meals in the fridge, so people can just grab something and go.”

A mobile meal truck slinging dishes that cater to people on gluten-free, vegetarian, and Paleo diets is a new concept for Kansas City. The story of Chop Chop begins with a CrossFit competition in Olathe, a little more than three years ago. Ripple was sponsoring the strength and conditioning competition as a way to promote Life Equals, the vitamin company that he owned at the time. As part of the sponsorship, he was searching for a caterer that could prepare a Paleo barbecue (no grains, no processed sugar, no dairy), a task that proved more difficult than he expected. “I realized that there might be a need that we could fill,” Ripple said. “This style of eating was starting to gain traction. I think we can see a shift culturally in the importance of nutrition in our lives and health.”

Together with Lueck, a chef, he decided to launch PaleoFit – a weekly meal delivery service that would follow strict Paleo diet guidelines (heavy on meat, fish, vegetables and fruits – a regimen meant to evoke the diet of our hunter and gatherer ancestors). The success of PaleoFit’s vacuum-sealed meals led Ripple to sell his interest in Life Equals two-and-a-half years ago.

As Ripple and Lueck got to know their customers, they realized that people were following a Paleo diet for a variety of reasons and many were customizing what PaleoFit offered by adding in dairy. They also realized that their weekly delivery schedule didn’t allow for people to make spontaneous decisions about what they wanted for dinner.

“We didn’t have a storefront and we don’t live in a culture where people like to wait,” said Ripple.

So, they thought about opening a space with prepared meals – a model that’s been wildly successful in cities like Austin, Texas, where Snap Kitchen and My Fit Foods have quickly built strong followings. In the midst of that search, Glen Posladek – the owner of A.B. May and Lueck’s family friend – offered them a free, used box truck from his fleet in early September. Nine weeks and one new engine later, the truck was rolling.

“Chop Chop is about speed and the freshness of chopping vegetables,” Ripple said. “Everything on the truck is gluten-free. There’s some Paleo and vegetarian offerings.”

“For a long time we didn’t offer desserts because of our thoughts on health in general. But we know people are going to eat desserts anyway, so we thought they should be made of good ingredients,” Ripple said.

He would eventually like to have several trucks and possibly a storefront to serve different parts of the city.

“We’re calling this a food truck because there’s not really a name for what we’re doing yet,” Ripple said. “We’re striving to offer healthy meals as conveniently as possible.”