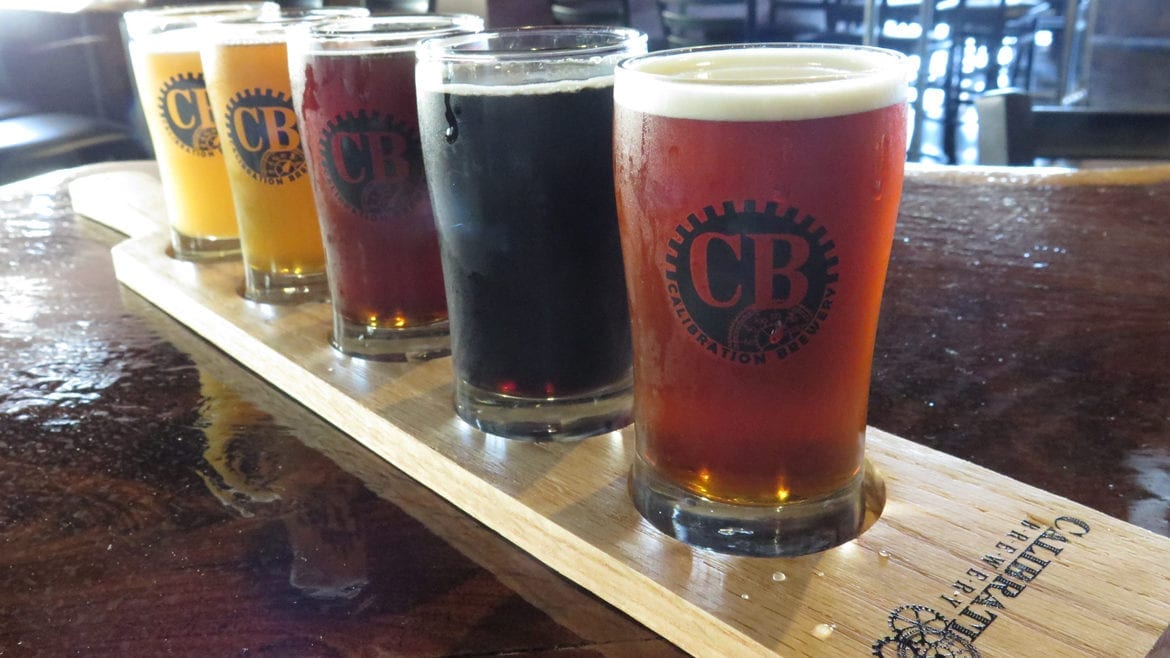 Calibration Brewery (119 Armour Road) quietly opened in North Kansas City last weekend with seven beers on tap. Each style except one bore the name of a song. For example, “Beast in Me” Brown Ale refers to a Martin Sexton song covered by Johnny Cash and many others. However, the brewery is still seeking a song title for the name of its German-style hefeweizen, a classic German wheat with hints of banana and clove. The brewery’s paper beer menu provides space at the bottom to write in a title along with a suggestion for what style brewer Pat Sandman, formerly with 75th Street Brewery, should brew next.
[Editor’s Note: The Hefeweizen has a name. It’s “Some Kind of Wonderful.”]

Meanwhile, a flight of beers is a common way to explore the various styles on tap.

The “Compared to What?” Scottish Ale is “more malt-forward with dark fruit undertones” than a pale ale, explains Sandman. “The style originates in Scotland, where you brew with what you had on hand.”

As such, the malty ale differs from a crisp pilsner that traditionally uses malt sourced from Germany.

Other Calibration beers include a crisp golden ale with mild malt balanced by hops, a copper-colored IPA with prominent floral and pine notes, and a roasted, chocolatey milk stout. In addition to the traditional English-style brown ale, the “All Day, All Night” alternate version uses coconut that is evident on the beer’s finish.

“I want the beer selections to speak to everyone’s palate,” says Sandman. “Calibration isn’t driven by one style or direction. I’m brewing classic styles. Down the line, I’ll experiment with sours and barrel-aging but the core beers are approachable.” 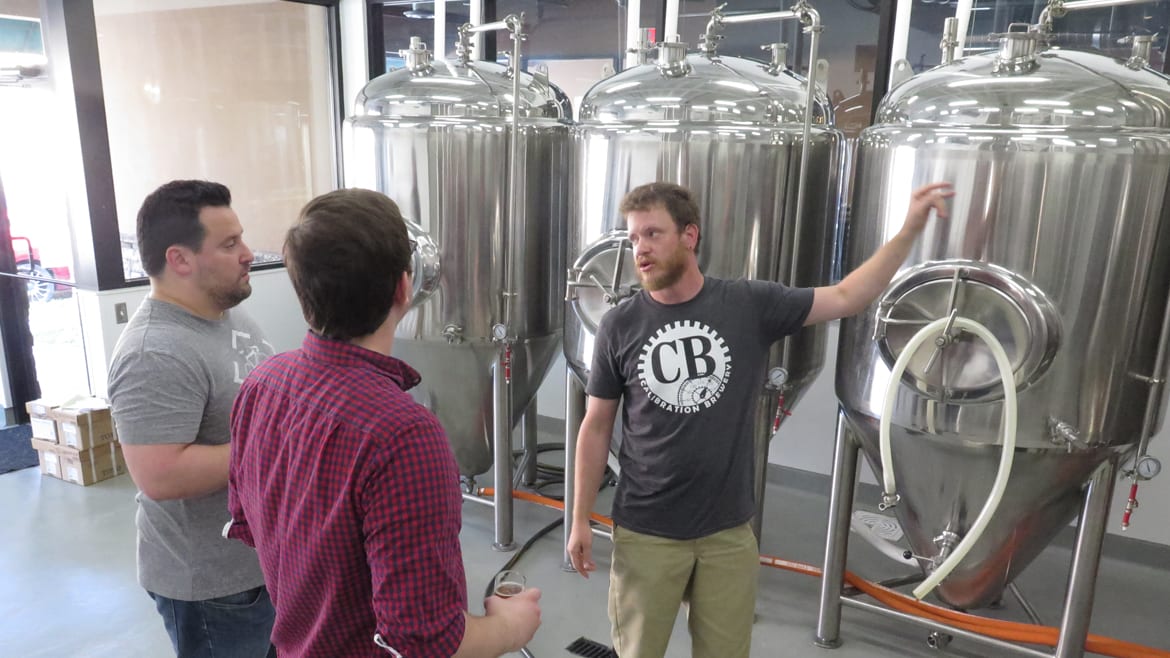 Calibration, founded by Northside Plumbing Co. owner Glen Stinson, joins nearby Cinder Block Brewery and The Big Rip Brewing Company as the third brewery in Northtown with one key difference among the three. The newest brewery has a full-service kitchen with an evolving menu of pub food and light, healthy dishes.

Fans of Clay’s will recognize favorites such as the Chicago-style hot dog and chili-and-cheese hot dog. The chef uses the golden ale in his beer cheese sauce recipe. The beer cheese and applewood-smoked bacon tops an all-beef hot dog served with fries.

Clay says, “I use the Red Hot Chicago brand for my hot dogs. That’s what sold well at the Curbside Grill so I’m sticking with them.”

The beer cheese sauce and spicy mustard also accompanies Brew Pub Pretzels, an order of three soft, large pretzel sticks. Clay says, “The pretzel sticks are made in Milwaukee. They’ve been popular in the taproom.” 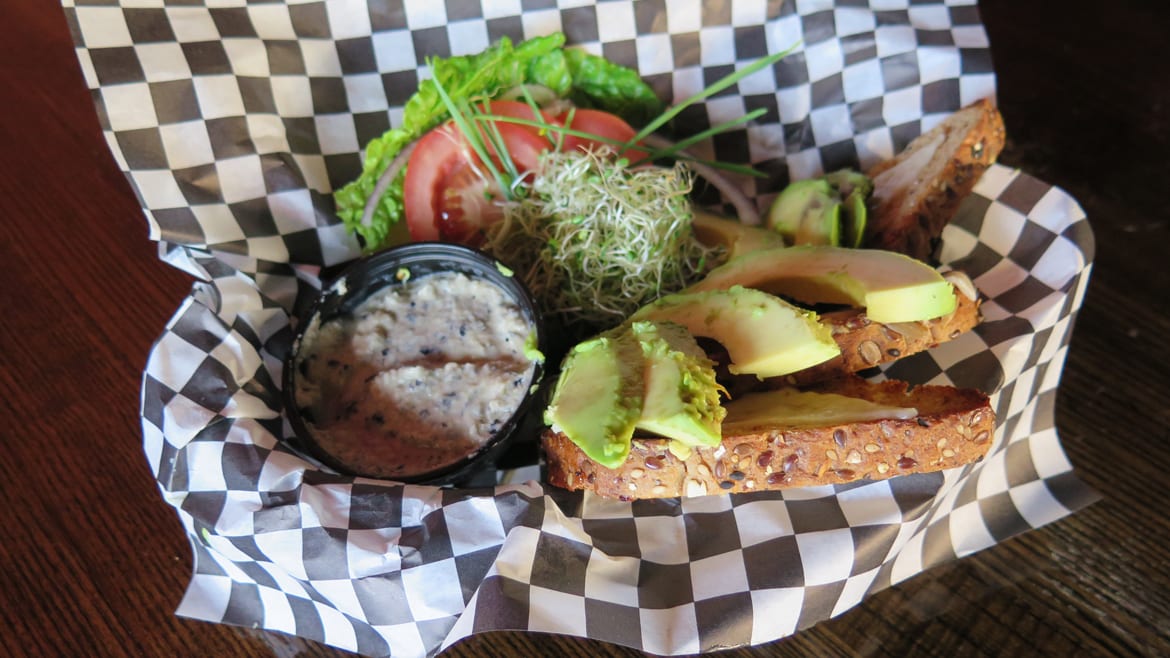 Other dishes include an open-faced avocado sandwich that represents the lighter side of the menu. Slices of toasted multi-grain bread are topped with sliced avocado and melted white sharp cheddar cheese. The dish is served with black bean hummus and toppings of tomato, red onion, lettuce, sprouts, and wheatgrass. Black bean hummus and warm pita bread is another fresh offering.

For heartier fare, try the classic cheeseburger with grilled onions or Brew Pub Wings available in several styles – hot or mild with a Frank’s Hot Sauce base, teriyaki, or Parmesan and garlic. The full wing portions are served as a half-order of three or full order of seven wings.

Clay has a more extensive menu planned and intends to tweak the current menu over time. He will introduce additional dishes once the brewery gets a gauge on daily traffic for lunch and dinner, adds staff, and determines what dishes are most popular.

Calibration Brewery will announce plans for a grand opening later this summer. Until then, drop in, order a pint of hefeweizen, and imagine what popular song title best expresses the German wheat beer’s identity.

Editor’s Note: An earlier edition of this story referred to “Beast in Me,” as a Nick Lowe song.