Sunny Side up at Sundown

Restaurants expect breakfast for dinner will go over easy 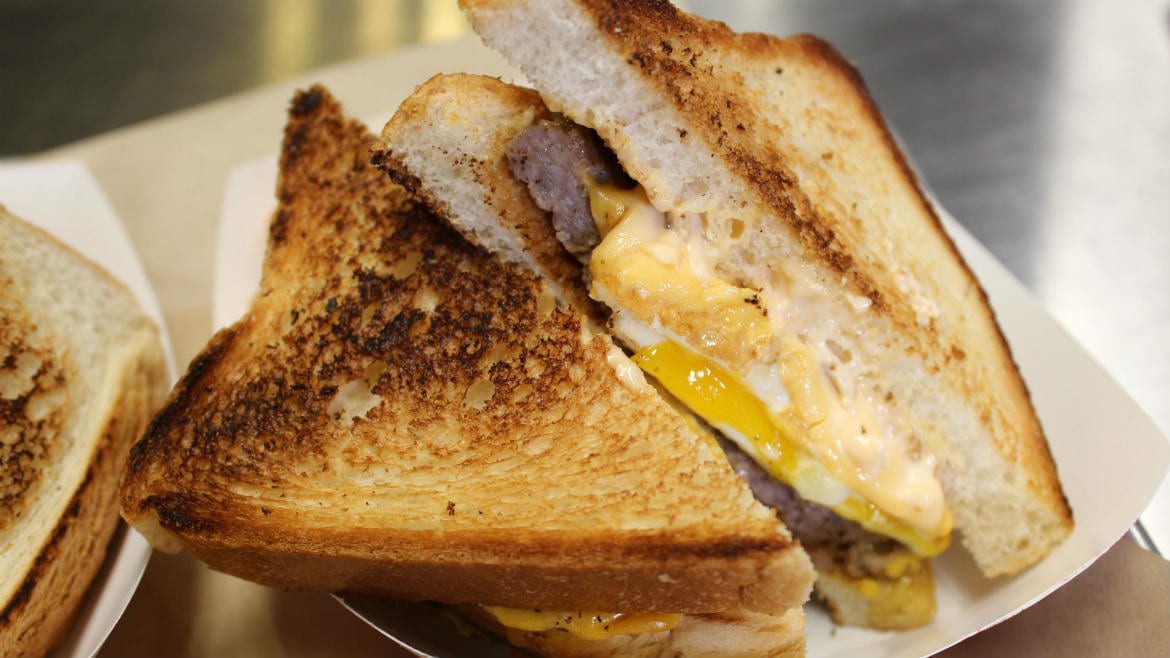 Breakfast for dinner – long a refuge for working parents and college students – is heating up on restaurant menus. Leeway Franks (935 Iowa Street) in Lawrence and Cleaver & Cork (1333 Walnut Street) in Kansas City’s Power & Light District are preparing to roll out egg sandwiches and sweet potato hash to show how breakfast doesn’t have to be just the most important meal of the day, it can be the only meal of the day.

“With breakfast, you’re in the driver’s seat and we’re just your valet,” said Lee Meisel, who owns and operates Leeway Franks with his wife K. “You just have to tell us which direction you want to go and we can take you there.”

The new breakfast menu will debut this Saturday, February 20, at 8 a.m. Leeway Franks, which opened last July, is expanding its hours on Saturday to test the offerings. Adding a breakfast menu was a way for the small operation to utilize some of their current ingredients in unique ways. Meisel’s background as a butcher — he breaks down whole pigs and makes all of the sausage in house — meant that there was already chorizo for breakfast tacos and Canadian bacon for a Mega Muffin – an oversize English muffin stuffed with egg rounds, two slices of Canadian bacon, spicy mayo (Hellman’s with a hit of hot sauce), and melted American.

Meisel knows that his sandwich has some of the same components as one of the world’s most famous breakfast sandwiches – the Egg McMuffin. He also knows why McDonald’s made the decision last October to start offering breakfast all day. 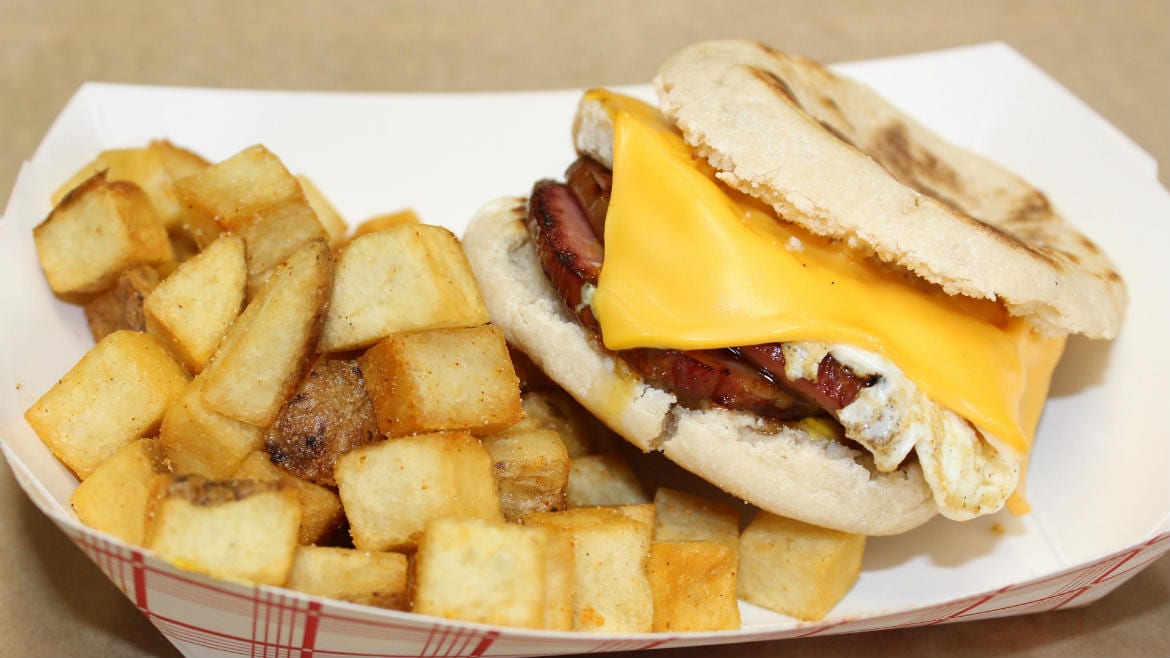 “It was the most disappointing feeling in the world to arrive at McDonald’s at 10:35 a.m. and miss breakfast,” said Meisel. “They know that people want their breakfast and now they’re giving people want they want.”

To that end, Leeway Franks will serve breakfast until it closes Tuesday through Saturday at 7 p.m. The eatery will also have fried egg sandwiches with Canadian bacon or sausage. Diners can add a side of cubed breakfast potatoes, made from Kennebec potatoes that are peeled and sliced in house for the fries on the regular lunch menu.

“When you fry them, they’re perfect and creamy on the inside with nice fluffy starch and super crispy on the outside,” said Meisel.

The cubed breakfast potatoes are part of a breakfast bowl – what Meisel calls his “Saturday morning breakfast,” – with a layer of potatoes or tater tots covered in sausage gravy, a fried egg and breakfast sausage link (pork with salt, pepper and sage).

Leeway Franks doesn’t have an oven, but Meisel is considering working with a local bakery to offer biscuits and gravy as a special. He’s also eyeing a steak and egg sandwich.

“Everybody can roll in and order an egg,” said Meisel. “They can leave here and feel like a million bucks or a nap. Either way, they’re happy.”

On March 4, Cleaver & Cork is going to unveil its own Breakfast for Dinner special on Friday and Saturday nights from 10 p.m. to 1 a.m. The idea is fusing brunch and a late night happy hour with cocktails and breakfast plates.

“It’s a way to reintroduce our reverse happy hour and it takes you back to being a kid a little bit,” said managing partner Eric Willey.

The menu will be a rotating series of five to six dishes, a chance for the kitchen to try out some brunch specials, as well as utilize the creativity of Alex Pope, a chef consultant and owner of the Local Pig. Willey expects that a sweet potato and barbecued pork shoulder hash, along with their take on poutine, will be on the initial menu next month. For the cocktails, he’s considering a smoked bloody Mary, as well as a coffee-inspired cocktail. The Valentino would be a riff on Blood and Sand (a classic mixed drink typically made with Scotch, blood orange juice, Cherry Heering and sweet vermouth) featuring vermouth with cold-pressed coffee.

“This happy hour lets the guys play around in the kitchen a little bit more. They can be really creative,” said Willey.

Cleaver & Cork’s menu is in transition. The restaurant, which celebrates its first anniversary next week, stopped lunch service earlier this year because they weren’t seeing demand, and plan on rolling out brunch service on Sunday, May 8, for Mother’s Day. Brunch will be offered from 10 a.m. to 3 p.m. and the more popular dishes from the late night happy hour will likely be on the brunch menu.

“We’re figuring out the demographic of not only the Power & Light but downtown,” said Willey. “Downtown is still changing and evolving.”

No Bumper Crop of Medical Marijuana in Missouri