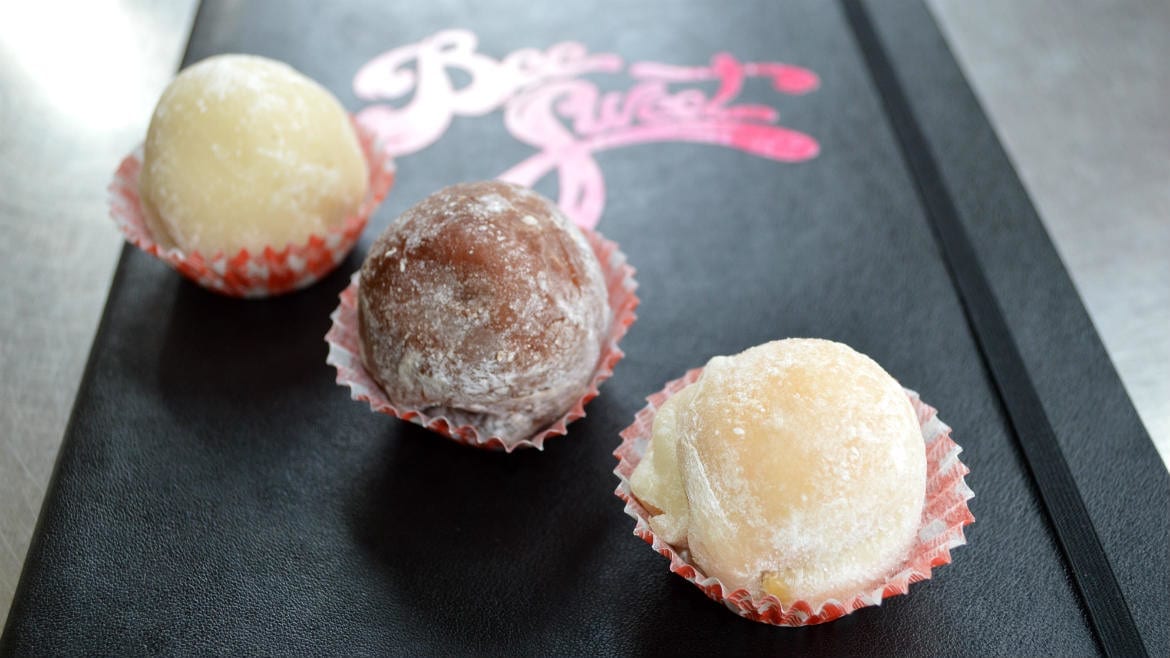 It’s like a la mode in every bite. Bee Sweet Ice Cream is set to debut a new ice cream novelty in the next month: pie-flavored mochi.

“I love exploring ice cream without dishware,” said Bee Sweet owner Manya Raoufi. “I love the mobility of mochi and that it is such a delicate thing.”

Mochi is a Japanese dessert. Sticky rice flour dough is filled with a ball of ice cream or paste. The outside of the sticky dough is then dusted with a starch like tapioca flour or corn starch. Raoufi first had mochi five years ago and her mind wandered back to it this fall as she thought about product development for her 10-month old ice cream company.

“The mochi dough itself is meant to be pretty subtle, but then I can do something dynamic inside it,” said Raoufi.

The dynamic she settled on was a mash-up of Americana and Japanese influences with a trio of holiday mochi flavors: apple pie, maple pecan and sweet potato. This is just the latest in a series of unconventional products for Raoufi. She’s remaking the ice cream truck, one treat at a time.

This summer, she experimented with a variety of choices – blueberry pancake push-up pops with a maple syrup core, black sesame and Thai coffee ice cream. But as she considers a retail push on a national scale, she’s decided to focus on a few specific flavors for her Essie tacos and raspberry sherbet push-up pops.

“A lot of people have commented that my flavors are not overly sweet,” said Raoufi. “Sugar is the bacon of the ice cream world. Of course, it’s going to be good with a lot of sugar. I like the challenge of making things that taste really good and are full-flavored, but delicately sweet.”

Raoufi currently makes her ice cream treats at the commissary kitchen at Flavor Trade – a food incubator at 31st and Troost.

“We’re all makers,” said Raoufi of her fellow tenants at Flavor Trade. “Our wares are different enough that we don’t feel competitive.”

Her Essie Tacos – named for her younger sister Esther – are a take on the cult classic Choco Taco. Raoufi’s dessert taco is a waffle cone (bent into taco shape) filled with cinnamon coconut milk ice cream and then dipped into dark chocolate sprinkled with sea salt. Coconut milk, which is shelf-stable and vegan, is going to be the base going forward for Bee Sweet’s ice cream products.

“Coconut milk has a softer and rounder texture than dairy,” said Raoufi.“I want to make a product that is accommodating and amazing.”

Her raspberry sherbet push-up pops use frozen organic raspberries and lemons by the bushel. To make a batch, Raoufi will juice and zest 200 lemons.

“It’s nostalgic as a treat you had as a kid, but the flavors are super dynamic,” said Raoufi. “It’s tart and sweet and the lemon pairs really well with the raspberry. It’s the lemon zest that makes the flavor stand out.”

“Sugar is the bacon of the ice cream world. Of course, it’s going to be good with a lot of sugar. I like the challenge of making things that taste really good and are full-flavored, but delicately sweet.” — Manya Raoufi

The growth of her business has Raoufi thinking about finding her own kitchen and building out a unique retail operation to match her approach to ice cream novelties. She launched a bicycle delivery cart this summer. But the demand at events has shown her that she needs something with more freezer space. She’s playing around with the idea of creating a mobile ice cream shop with foldout seating in the shell of an old ice cream truck. Still, she wants to be clear that this wouldn’t be a staid ice cream parlor on wheels.

In the interim, she’s working to perfect her mochi recipe. The dough is made with sticky rice flour, organic cane sugar, and a pinch of salt and vanilla that is “reminiscent of pie crust.” She steams the dough in a microwave, rolls it flat and then lets it cool. Then she takes a cookie dough cutter to punch out circles that will be stuffed with one-ounce balls of her ice cream.

For the apple pie, Raoufi uses ginger crisp apples that have been roasted with clove, cinnamon and sugar.

“It tastes like apple pie when you bite into it. It’s really remarkable,” said Raoufi.

The sweet potato is a nod to taro (a root vegetable often food in Japanese cuisine), and the maple pecan features toasted pecans and a bit of maple syrup.

“It’s not necessarily an actual pecan pie. It’s more like what I would want a pecan pie to taste like,” said Raoufi.

While the pie flavors feel appropriate for Thanksgiving, Raoufi is eyeing the next seasonal mochi trio. She’s considering her own twist on a tea-based line, a play on green tea, a traditional mochi flavor. As a child, she loved Cambric tea – a mixture of sugar, steamed milk and a splash of tea – and she could see how that would translate into a bite-sized dessert.

“I thrive on being unique and creative,” said Raoufi. “I just want to keep doing what’s unexpected.”