All about that broth 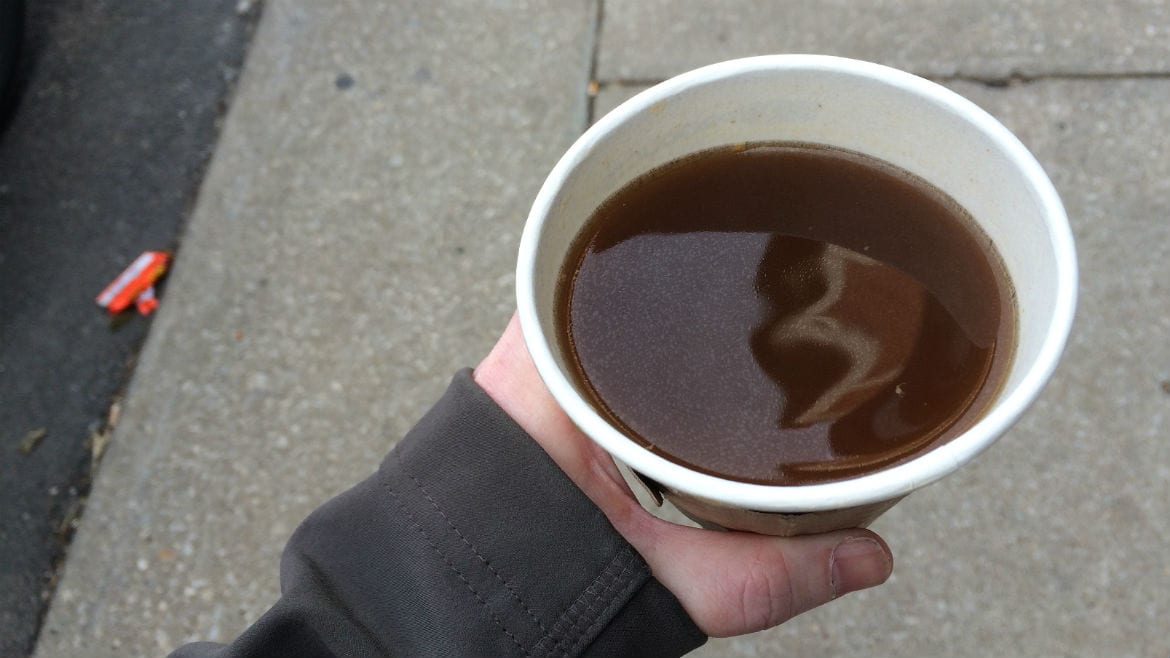 The stock that your grandma made because she had the carcass of a whole chicken is the new ‘it’ food. Photo: Jonathan Bender/Flatland/ Recommended Daily
Share this story

This is a story of soup interrupted. Stripped down stock that will never see a bowl. Bone broth – the liquid resulting from the long, slow boiling of animal bones usually in a combination of water, apple cider vinegar and a few vegetables (carrots, celery and onion, among them) – has gone from classic to chic.

In other words, the stock that your grandma made because she had the carcass of a whole chicken is the new ‘it’ food. Gwyneth Paltrow believes it can help you detox. And Brodo – a broth stand created by celebrity chef Marco Canora — has drawn crowds of several hundred New Yorkers waiting to get their hands on a hot cup of chicken broth.

If you had any doubt about the trend coming to Kansas City, a billboard in Waldo that advertises Panera’s new Broth Bowls should answer that question. Broth is starting to pop up on store shelves and lunch – as well as cocktail – menus around KC.

“If you set a Google alert [for bone broth], your Google alert will never stop going off,” Uncommon Stock’s Todd Schulte says. “I don’t know if I’d call it a trend, but I know that our demand keeps growing.”

On a recent Tuesday morning, Schulte is on the second of a pair of runs to Restaurant Depot – picking up supplies and sundries for the Genessee Royale Bistro (his restaurant in the West Bottoms) and Uncommon Stock, the soup company he co-owns with Bill Haw Jr. Even over the phone, it’s clear that he’s amused to discover that a steady portion of his soup business over the past several years has suddenly become trendy.

Schulte began making 20-quart batches of bone broth a few years back – Uncommon Stock sells original and ginger broth. Now, it’s 40-gallon kettles and Schulte is in the process of setting up his kitchen to expand into more retail accounts. He has athletes that tell him it’s good for their joints, customers on the Paleo diet and others attempting to address Celiac disease (an autoimmune disorder, wherein eating gluten can damage the lining of the small intestine).

“Most people are using the bone broth in the same manner as they would sip on a cup of tea in the morning,” Schulte says. “It’s nutrient packed and easy to digest.”

To make bone broth, Schulte uses bones from grass fed cattle, water and unfiltered cider vinegar. That’s the first cook. He’ll then use the same bones with water and a mirepoix –chopped carrots, celery and onion — as well as bay leaves, thyme and peppercorns for the second cook. In the last step, the two broths are combined and cooked down further (Schulte adds fresh ginger during this final step for the ginger version). They’ll set up like a “broth Jell-o mold,” when cooled in the refrigerator.

“Drinking it gives you a content feeling, but you would have to drink an awful lot if you were looking for the feeling of coming off a buffet line,” Schulte says.

While increased demand has stopped Schulte from expanding the line of broth flavors, he’s toying with the idea of working in lemongrass and star anise or fresh turmeric. Uncommon Stock sells its broth in quart containers, but you can find broth downtown and take it for a walk just like at Canora’s Brodo in New York City.

The Sundry, a grocery and restaurant in the Crossroads, has been offering a Cup O’ Broth for the past six weeks. Chef du cuisine Noah Gough, formerly of Novel, first experimented with a vegetarian broth – a hot Asian spiced mushroom broth made with dried shiitakes, scallion, ginger, carrots, celery, garlic, clove, allspice, crushed red chile, and Szechuan peppercorns.

“The staff got excited about it, but it didn’t really take off until we added meat,” co-owner Aaron Prater says.

They’ve cycled through the barnyard – a chicken, turkey, beef and the current pork offering over the past month.

“Ours is meant to be a walking broth. We don’t garnish it because we wanted something that people can walk away with in their hand and they don’t need a spoon,” Prater says.

“Every culture has a soup and the broth is the base of that,” Prater says. “On some sort of primal level, everybody enjoys a good soup.”

In the summertime, Prater could see shifting to cold or fruit consommés.

The stock that your grandma made because she had the carcass of a whole chicken is the new ‘it’ food.

The idea of seasonal stocks is one that appeals to bartender Arturo Vera-Felice, who has been managing the bar program at Justus Drugstore in Smithville, Missouri, since October 2014. He’s been playing around with a warm stock cocktail garnished with diced raw vegetables for a bit of brunch.

“I love the idea that you can get warmed up coming out of the cold or have something hot before you go out in the snow,” Vera-Felice said in a recent phone conversation.

Broth takes him back to basic training as a Marine where he’d be given ‘Hot Wets,’ a combination of chicken stock and beef bullion to help stay warm and hydrated. A few nights previously he had been sipping on a pork stock fortified with Kobe beef bones that he’d doctored with celery bitters.

“I literally took something that chef [Jonathan Justus] was reducing in the kitchen for a bacon pate and drank it,” Vera-Felice says. “It’s great to have a kitchen in a craft cocktail bar because it gives you all these tools you normally wouldn’t have.”

Vera-Felice believes out that drinking broths have long been a staple of bars. He notes that a bloody bull cocktail is just a bloody mary with added beef bullion and cites a visit to Employees Only, a bar in New York City, where last call comes with a free cup of chicken soup.

“I’m just waiting for it to be cold again,” Vera-Felice says. “Then, I can have a crock pot of broth and be ladling it out as people sit down at the bar.” 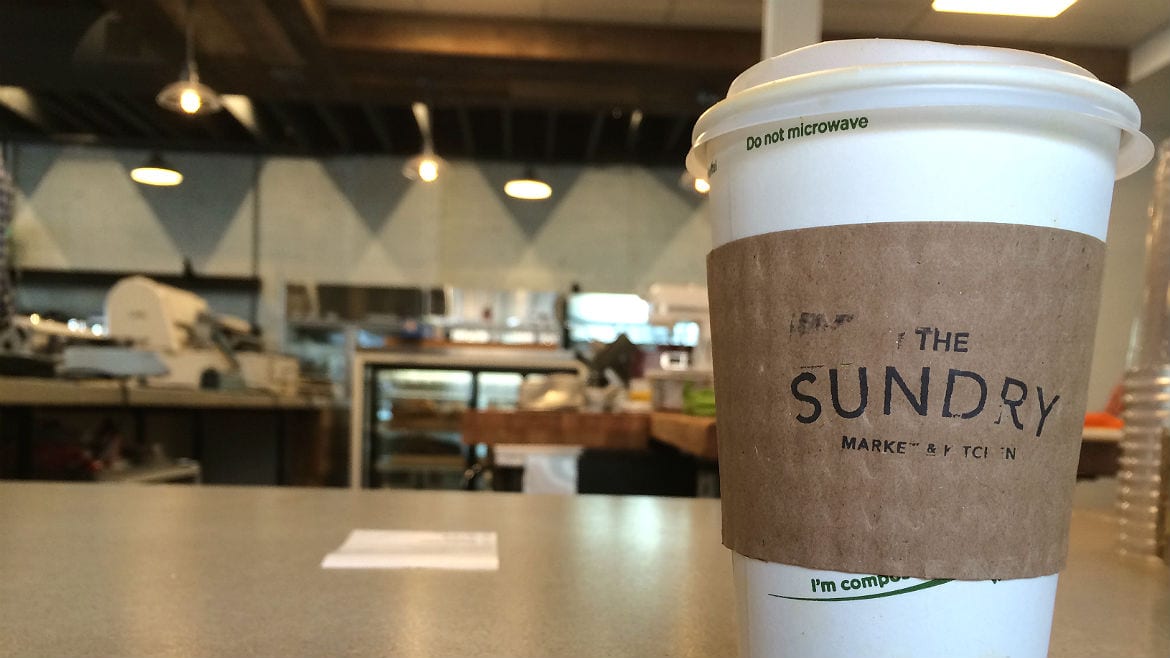