When Townes Was in Town

You Asked, We Tuned In 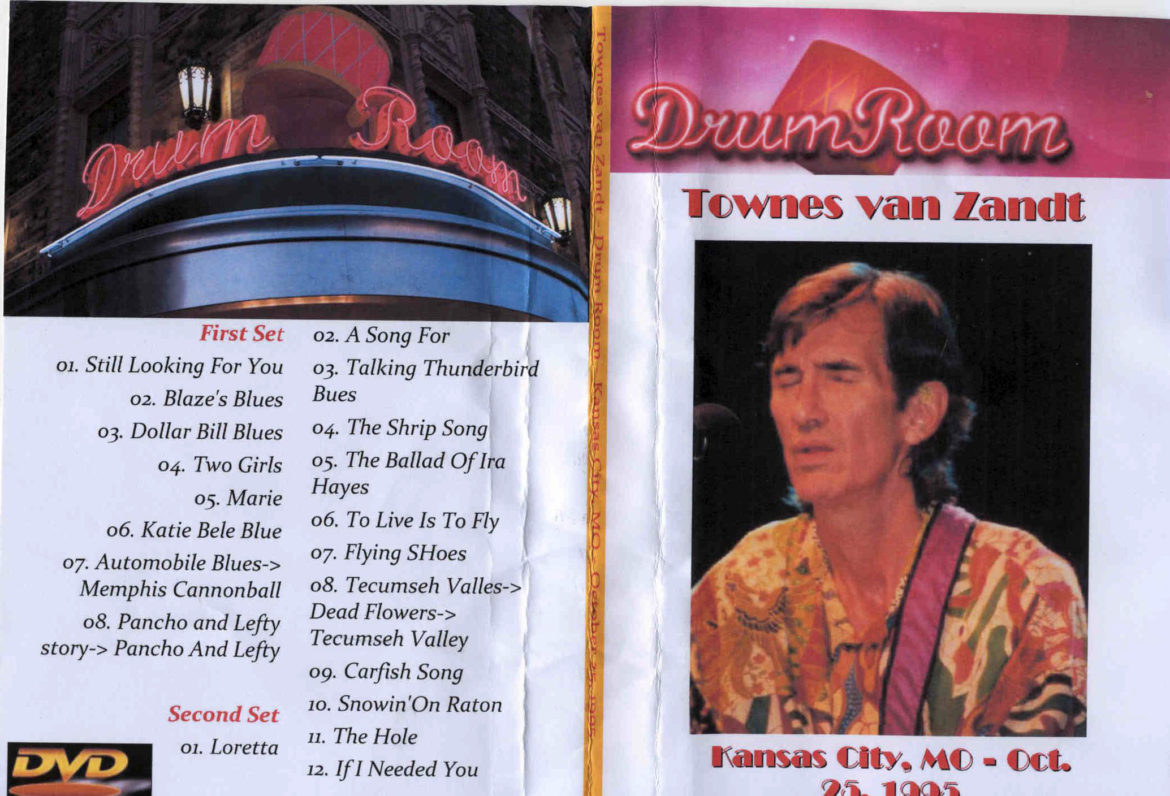 This DVD cover shows the set list from when Townes van Zandt at the Drum Room in Kansas City, Missouri. (Contributed)
Share this story

From the jazz greats of the 1930s to The Who’s iconic performance at Shawnee Mission South, to the Beatles Municipal Stadium gig, Kansas City’s venues have hosted some of music’s most iconic legends.

In that vein, curiousKC received a question from one of our readers: “Did Townes Van Zandt ever play in KCMO? If so, when & what was the reaction (& was the performance recorded)?”

Van Zandt was a troubled but brilliant roots artist known for his moody ballads and skill at guitar. He never quite gained the level of success he deserved, but his music influenced some of the period’s most prominent country, blues and folk artists.

Van Zandt, who battled depression, addiction and a myriad of health problems, died on Jan. 1, 1997 from a heart attack.

Dr. Leonard Coop, assistant professor in the Department of Horticulture at Oregon State University and site designer for Blue Sky – a fan page chronicling Van Zandt’s career – attended the gigs at the Nelson and the Community Theatre in Lawrence, Kansas, that followed the day after.

“There’s limited information about Townes, but we have been collecting it and rendering it as sort of a year-by-year, day-by-day timeline of what’s known about his performances, and linking in any sort of supporting materials – like a setlist, review, concert posters and previews to support the show,” Coop said.

Coop, who is originally from Kansas City, has engaged in this painstaking process for 23 years, with help from a host of other Van Zandt fans, including his German counterpart, Hans Golverdingen.

Coop remembered the Nelson and Lawrence gigs as being the best of the 10 Van Zandt shows he was able to attend in person. And, miraculously, Coop just so happened to tape Van Zandt’s performance at the Nelson. He very graciously agreed to share the show, in its entirety, with Flatland. See below.

As for the reaction, Coop recalled that the audience at the Nelson was rapt.

“Everybody was truly mesmerized. You could hear a pin drop. And that was a typical performance for him – people at the edge of their seats,” Coop said. “That may have been his first show in Kansas City, but there were a lot of hardcore Townes or folk music fans that had heard of him. But his expression of his work in the moment made it unique. Every one of those songs was remarkable in its own way.”

Coop also indicated that Van Zandt’s Drum Room performance in 1995 was filmed and compiled into a DVD that he has collected and stored. The gig was toward the end of Van Zandt’s career, as he struggled with a divorce, depression and substance abuse. A Kansas City obituary following his death recalls that final KC gig as the artist “at his worst, playing and singing badly and forgetting his own lyrics.”

A very sad ending to a storied career. But Van Zandt’s legacy proudly lives on through the myriad of biographies, films, and fan sites – like Coop’s – that pay well-deserved tribute to the artist.

This story is part of Flatland’s local coverage in conjunction with Ken Burns’ “Country Music” documentary which will premier on KCPT Sept. 15 .

—Dan Calderon is Kansas City native, an attorney and contributor to 90.9 The Bridge and Flatland. You can contact him by emailing pdancalderon@gmail.com or on Twitter @dansascity.