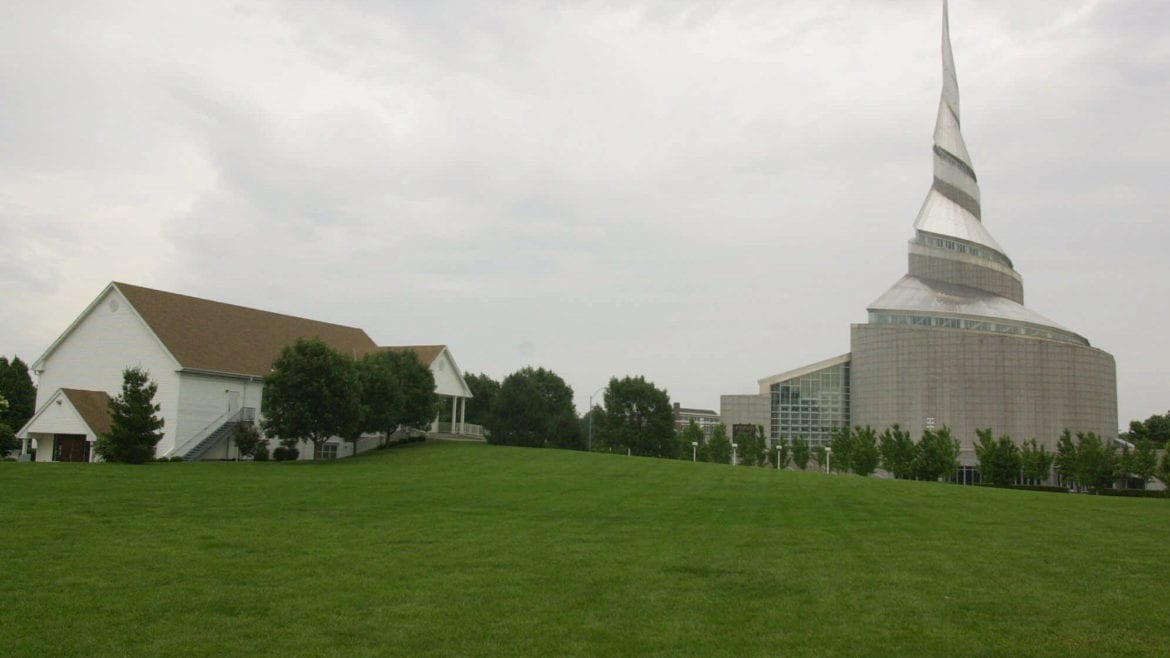 The Church of Christ, left, Temple Lot and the Community of Christ's temple and world headquarters, right, in Independence, Missouri. The temple lot is the location where Mormon church founder Joseph Smith planned to build a temple in 1831. (Orlin Wagner | AP)
Share this story

Like many Metropolitan-area residents, Valorie Wells Fenton has driven by the silver spire that corkscrews skyward in Independence, Missouri. She heard it’s the place Mormons expect Jesus to return and wondered if the site may be to Mormons like the Vatican is to Catholics.

After talking with family and friends about the church, she realized there is a lot of interest in it and that people don’t quite understand the Mormon religion and its offshoots. This prompted the Kansas City, Kansas, resident to ask curiousKC, “What’s the difference between the Church of Jesus Christ of Latter-day Saints, the Reorganized Church of Jesus Christ of Latter-Day Saints and Community of Christ churches?”

The Church of Jesus Christ of Latter-day Saints or LDS (often referred to as Mormons) is headquartered in Salt Lake City and has more than 16 million members worldwide. It’s now one of the largest Christian denominations in the country. There are now more than 200 temples around the world, including one in Kansas City, Missouri, at 7001 Searcy Creek Parkway in the Northland.

The church’s history dates to 1830 when Joseph Smith claimed an angel gave him guidance to write the Book of Mormon. Latter-day Saints consider the book to be a history of great ancient American civilizations, and it includes an account of a visit to the New World by a risen Jesus Christ. Smith said the book was inspired by his translation of golden plates he unearthed in New York state.

Form its origins, the church had a bumpy path. Its leaders moved to various parts of the Midwest, including Missouri, trying to create a home base. Traditional Christians chased off the leaders from many proposed settlements. In 1844, Smith was murdered by a gang while in jail in Carthage, Illinois.

The church split after Smith’s death.

Brigham Young took the Mormons west and ended up in 1847 in what would later become Utah.

Emma Smith, Joseph’s wife, stayed with their children in Carthage. They felt a descendant of Smith should remain the head of the church. In 1860, their oldest son, Joseph Smith III, established the Reorganized Church of Jesus Christ of Latter-Day Saints (RLDS), which he headed for 54 years.

It wasn’t until 1996 that a non-relative of Smith, W. Grant McMurray, was elected as president. Under his leadership, the name of the church was changed to the Community of Christ in the early 2000s.

The international headquarters of the Community of Christ is located at the complex in Independence. The churches’ scripture says that the Lord told the original Joseph Smith that Independence was to be the site for a sacred city called Zion, in which a temple was supposed to be built in preparation for the savior’s millennial reign.

Both churches are Christian and consider the Bible and the Book of Mormon as important scriptural texts. They have large missionary programs that proselytize and perform humanitarian efforts worldwide. They generally follow laws governing topics such as sexual purity, health fasting, tithing, observing the Sabbath, priest ordination, baptism and confirmation.

Jeremiah Morgan, who lives in Kansas City, North, is well positioned to talk about both churches.

He grew up in Independence, Missouri, within the RLDS. But he switched to the LDS when he was a senior at William Chrisman High School, at around the time RLDS was changing some core doctrines and transitioning to become the Community of Christ.

Morgan is a deputy attorney general for the state of Missouri. He volunteers as a regional LDS spokesman — in part, he said, to dispute commentary claiming Mormons are not true Christians.

First off, he said, LDS members aren’t thrilled with being called Mormons.

For a long time, church members accepted the nickname that comes from their belief in the Book of Mormon. But the church’s current leadership is more adamant about being identified as members of the Church of Jesus Christ of Latter-day Saints.

Morgan also addressed one of the most controversial practices attributed to LDS: polygamy. Church officials banned it more than a century ago, Morgan said. Yet splinter groups, such as the Fundamentalist Church of Jesus Christ of Latter-day Saints, do approve of taking of multiple spouses and perhaps feed the perception that all Mormons believe in polygamy.

One of the basic differences between LDS and Community of Christ, Morgan said, is that the former does not ordain women for the priesthood while the latter does.

LDS also differ from Community of Christ and other Christians in their belief that, even though God is immortal and eternal, he is actually a body of flesh and bone. Mormons also consider Jesus, God, and the Holy Spirit to be separate, a different viewpoint, Morgan said, than traditional Christian belief that all three are essentially one being.

Clarification: This story has been updated to clarify differences between the LDS and Community of Christ.