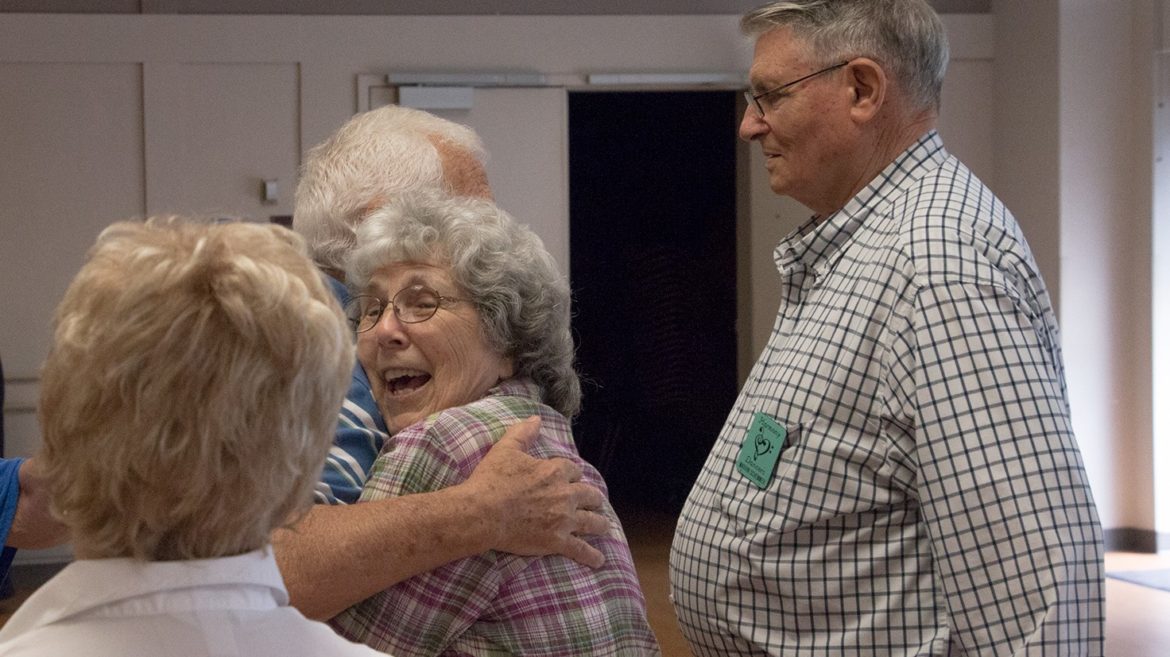 Joyce Schemmer stands in the middle of an empty hardwood floor at Vesper Hall, a senior center in Blue Springs, Missouri. She is clapping and beckoning the other participants in the room, including her husband, Marvin, to join her.

Marvin and Joyce belong to The Harmony Dancers, one of the oldest square dance clubs in Kansas City. They joined in 1971, back when it was known as the Swangers.

“It’s the best thing we ever did,” Joyce said. “It’s a good activity. It’s good for the mind, it keeps it going.”

The Schemmers and their 23 companions meet the third Friday in September through May (although they still dance during their summer break). The Harmony Dancers and the 15 other square dance clubs in the Kansas City metro carry on a long tradition that continues today.

While a piece of Americana, square dancing has influences from France, Scotland and Spain. It was brought to America by European colonists in the 1600s. Some of the commonly used phrases in square dancing such as ‘promenade’ and ‘do-si-do’ are both French.

The activity was incredibly popular up into the late 1800s. After a lull in the early 1900s, the dance took off after World War II. That popularity maintained on through the 1950s, when some of Kansas City’s oldest clubs like the Harmony Dancers were established.

The Harmony Dancers was started by Bill Kimble in 1958, when it was originally known as the Sun ‘N’ Surf Swangers. After realizing that the club was in the heart of the Midwest and had little to do with both sun and surf, they decided to take on the name the Swangers.

Out in Gardner, Kansas, the Docey Dandies get together to dance the second and fourth Saturdays of every month until their summer break. The Dandies were established in 1956 by a group of dancers. T.J. Miller, the club’s first caller, was with the club for three years before being replaced by Dick Enderele. The club shuffled callers until 1996, when Mike Salerno took over. He is still the club’s caller.

Salerno started dancing when he was 12, and began calling at 15. He said square dancing keeps him active.

“Well it’s a physical and mental activity,” Salerno said. “For me, it’s a big puzzle because I’m doing spontaneous choreography and watching the dancers.”

Susan and Thomas Bender joined the Docey Dandies after a couple from their church convinced them to take up lessons. This was right after Thomas had retired, making them a part of the demographic the Dandies are trying to recruit.

“We try to get new empty nesters who don’t have anything to do yet,” Bender said. “Newly retired people and (empty nesters), those two demographics are easier to break into, if you will. Because they’re still trying to figure out what they are going to do with their time.”

Joyce Schemmer said that square dancing has helped more retired people like herself get and stay healthy. Marvin said a two-hour session of square dancing equates to about a three-mile hike.

After undergoing hip surgery two years ago, Joyce told her doctor she wanted to get back to square dancing. It took her six months to do so.

“Our children say we are going to live forever because we don’t slow down.” she said. “So I do believe it helps your health.”

Yes, square dancers often skew on the older side. And yes, the music traditionally played is old-school country western. Some square dancers are worried that younger generations will not take up the activity.

Salerno says that today, people dance to a variety of different genres.

“Square dancing has been around for so long, it’s always been (dancing to) popular music,” Salerno said. “Yes, we use a lot of country music, but I’m using ‘Fireball’ by Pitbull, I’m using all kinds of different music nowadays.”

However, there are efforts towards getting youth interested in square dancing.

Classes are available to teach younger people how to dance, but Salerno believes it comes down to the callers to make square dancing fun for younger audiences.

“My job is to present it in such a way that they have a good time, regardless of what the music is,” Salerno said. “Unless they’re hardcore, I don’t know, hip-hop or rap people, they’re going to find something in it. I mean, the beat is always there, you’ve got to find something in there.”

And square dancing culture is broader than one may think. The International Association of Gay Square Dance Clubs (IAGSDC) has affiliates in 21 different U.S. states, as well as clubs in Canada and Tokyo.

Kansas City was home to the Sho-Me Squares, an IAGSDC club that existed from 1993 until 2011.

Last year, people from all over the globe traveled to Kansas City for the 67th annual National Square Dance Convention. Dancers from the U.S., France, Canada, the Philippines and other nations came together to celebrate.

Regardless of language spoken, all square dancers come together when the calls begin.

“The thing about square dancers, they’re really all the same,” Salerno said. “They’re very supportive. I had some people years ago, I would purposely not tell them I had a dance, let’s say 100 miles away, because they would be there.”

Once the square dance session at Vesper Hall is done, the Schemmers join in with the rest of the Harmony Dancers for a big thank you, a common practice after the dancing is finished.

Some of the dancers take off right away, going back to their busy lives. Others, like the Schemmers, stay behind and chat about where they will be getting their late lunch.

When they leave the hall to go eat barbeque, the hall is once again vacant, waiting for the next dance.

In conjunction with Ken Burns’ documentary series, Country Music, Kansas City PBS is highlighting local stories about the impact of country music in our region. Learn more atkcpt.org/country-music and tune in for the premiere September 15 on KCPT.  Presented by Bank of America.