How One Kansas City Hospital Treated Segregation in the ‘50s

You checked in, we took out our stethoscope 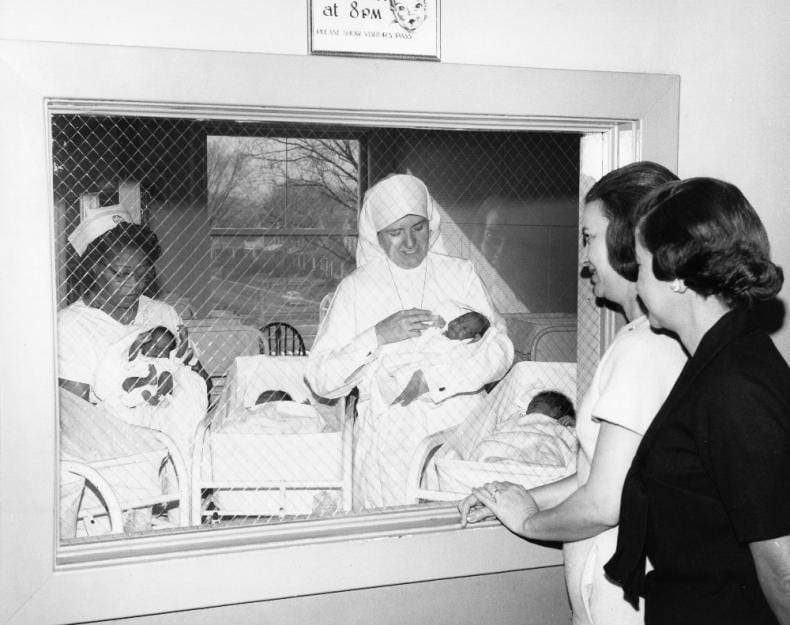 Sister Madeline Dorsey, the hospital’s administrator, works alongside a nurse at Queen of the World Hospital, circa 1960. (Contributed | Black Archives of Mid-America Kansas City)
Share this story

During a snowstorm in early January, Carol Johnson’s power went out, so her neighbor invited her over for dinner. They started talking about Queen of the World Hospital, a now-shuttered medical facility dating back to the ‘50s that employed and treated people of all races during a time when hospitals were segregated.

“We tried to research that facility to no avail,” Johnson wrote in an email to Flatland.

So she turned to curiousKC: “What is the history of Queen of the World Hospital?”

Flatland went digging and unearthed a treasure trove of history, not just about an old hospital, but also Kansas City’s legacy of civil rights activism in local medicine.

A Place for Everyone

Queen of the World Hospital was a beacon of unity at a time when black and white citizens were segregated. “Non-white” Kansas Citians – categorized as black and Mexican at the time – had limited options for health services, which became an even larger problem after a historic 1903 flood hit the region.

An article in a 1962 edition of the Journal of the National Medical Association chronicled the fight for a racially integrated hospital in Kansas City. It began in the early 1900s with two black doctors – J. Edward Perry and Thomas Unthank. The doctors wanted to train black students but faced pushback when they sought to gain access to facilities and materials afforded to white doctors.

A conversation quoted in the Journal outlines the struggle: “How the hell do you think we can be the kind of doctors we ought to be unless we have advantages equal to others?” Unthank said.

Undeterred, Perry and Unthank pushed ahead to train and integrate more people of color in hospitals. Despite the lack of support, Perry opened the city’s first exclusively black private hospital in 1910 called The Perry Sanitarium, but it fell short of their vision.

Fast-forward nearly 50 years to an effort led by Archbishop Edwin O’Hara of the Catholic Diocese of Kansas City-St. Joseph.

“Archbishop Edwin O’Hara wanted to open a racially integrated hospital, the first in Kansas City and one of only a handful in the nation,” according to one historical account.

When community members suggested in 1952 that O’Hara open a hospital just for the black population, he declined. “I will suggest that the hospital open its doors to all persons regardless of race, color or creed,” the archbishop said.

O’Hara succeeded in opening Queen of the World Hospital on May 22, 1955, at the former site of St. Vincent’s Maternity Hospital on 3210 E. 23rd St., according to Black Archives of Mid-America Kansas City. The Maryknoll Sisters, a missionary group, ran the hospital.

Records dating back to 1961 show that black and white nurses worked alongside one another, and 41 of the 258 physicians were black. According to a description from the Black Archives’ collection, no other accredited hospital in Kansas City, Missouri, accepted black physicians.

Not only did the hospital teach and hire people of color, it also treated patients of all races.

Sister Madeline Dorsey, the hospital’s administrator, didn’t work just to integrate within the hospital – she participated on the front lines of the Selma march, a civil rights protest.

The same year the hospital opened, The Kansas City Star acknowledged a changing public consciousness toward segregation: “… adults generally in Kansas City are increasingly becoming aware that race should be no factor in the hospital care of human beings, anywhere.”

And in 1956, the Maryknoll Sisters took it a step further by opening the School of Practical Nursing where they trained black, Latino and white Kansas Citians.

Flatland perused a stack of 125 manila envelopes that contained student report cards from the School of Practical Nursing, some of which still show the Sisters’ comments written in cursive with blue ink. These records also contained some students’ handwritten letters that “requested transcripts for $3” and black-and-white graduation photos.

Of the 125 students, five were Hispanic and 10 were white. Black women made up the majority of the student body.

Queen of the World Hospital shuttered in December 1965. Its closure marked a significant turning point for civil rights in Kansas City history.

At this point in the late ‘60s, there was less of a need for it because Kansas City had begun to realize the vision championed by O’Hara and Drs. Unthank and Perry – a hospital open to people of all races and creeds.

Simone Esters contributed to this article. She is a convergence journalism student at the University of Missouri – Columbia.