Ghost (Signs) of KC’s Past 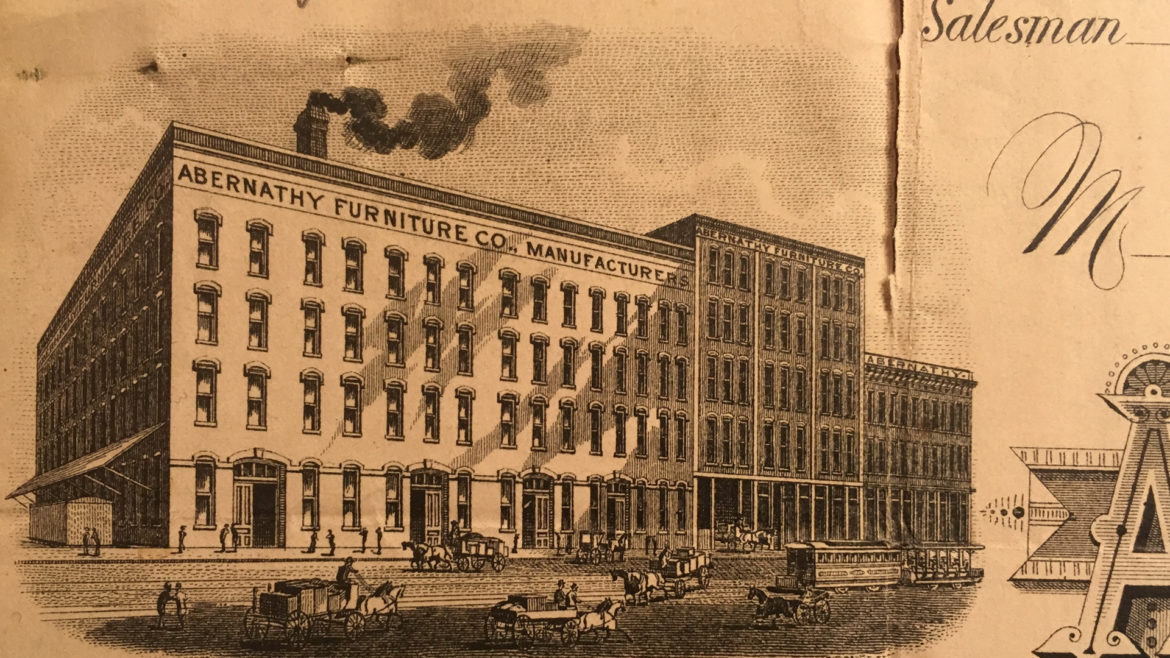 The Abernathy Furniture Co. featured its sprawling building, located in the West Bottoms of Kansas City, Missouri, on its sales receipts. This one is from 1889. (Missouri Valley Special Collections)
Share this story

The past fades, but it doesn’t disappear.

The same is true of those old painted advertisements still faintly visible on buildings throughout Kansas City, including in the River Market and West Bottoms. These are the billboards of yesteryear, and their random placement creates a checkerboard of the city’s rich business history.

Jeff Floyd calls these faded placards “ghost signs,” and he can see a dozen of them from the downtown loft he shares with his wife. As a retired history teacher, it’s no wonder the signs intrigue him. Nor is it surprising that, as a tech nerd, he’s taken 360-degree drone photos (and regular stills) of these ads and posted them on his blog.

As he indulged this passion, one question came to mind: What is the oldest one of these signs still around? So, he fired off that inquiry as a pop quiz to curiousKC.

curiousKC is happy we never had Floyd as a teacher; we’re thinking he snuck us a trick question. It seems virtually impossible to verify which of the signs is the oldest.

So, let’s say it is safe to assume that the original building owners painted the advertisements at about the same time the buildings were completed. If so, two buildings constructed in the late 1800s display possible contenders. They are the Townley Metal and Abernathy Furniture buildings.

Here’s a brief history of the men behind the buildings.

James P. Townley worked in the retail stove and tinware business in Indiana until he came to Kansas City and established Townley Metal Company in 1884, according to Carrie Westlake Whitney’s three-volume “Kansas City, Missouri: Its History and Its People,” originally published in 1908.

It was not until 11 years later that he built his first warehouse at Second and Walnut streets. A second warehouse went up six years later.

Whitney said Townley was a forward-thinking businessman who developed “modern business lines.” Apparently, he was also not your stereotypical Industrial Age capitalist.

“There has been continually a bond of friendship and common interest between him and those in his service,” Whitney wrote, “for he is entirely lacking in that spirit which is too prevalent in this day of gigantic commercial enterprises, when the employee is treated more as part of a vast machine than as an individual.”

Today, as Kansas City does, owners have converted the building into hip living space, as is happening now with the shell of the Abernathy warehouse.

Furniture mogul J.L. Abernathy, a colonel in the Union Army, migrated from Leavenworth to Kansas City in 1870. His ultimate success “gained him rank among the capitalists” of the city, according to Whitney.

In July 1950, The Kansas City Star reported on a business transaction that involved Abernathy’s original sprawling warehouse around West Ninth and Liberty streets in the West Bottoms.

Abernathy and his brothers started the firm in Leavenworth in 1856, and The Star reported that the company first occupied the Kansas City space in 1878.

Our search at the Missouri Valley Room Special Collections did not reveal much about the later years of these two companies. For history buffs like Floyd, it’s fortunate that the signs of their existence did not fade away with the businesses.

—Peter Loganbill is a summer intern at Kansas City PBS