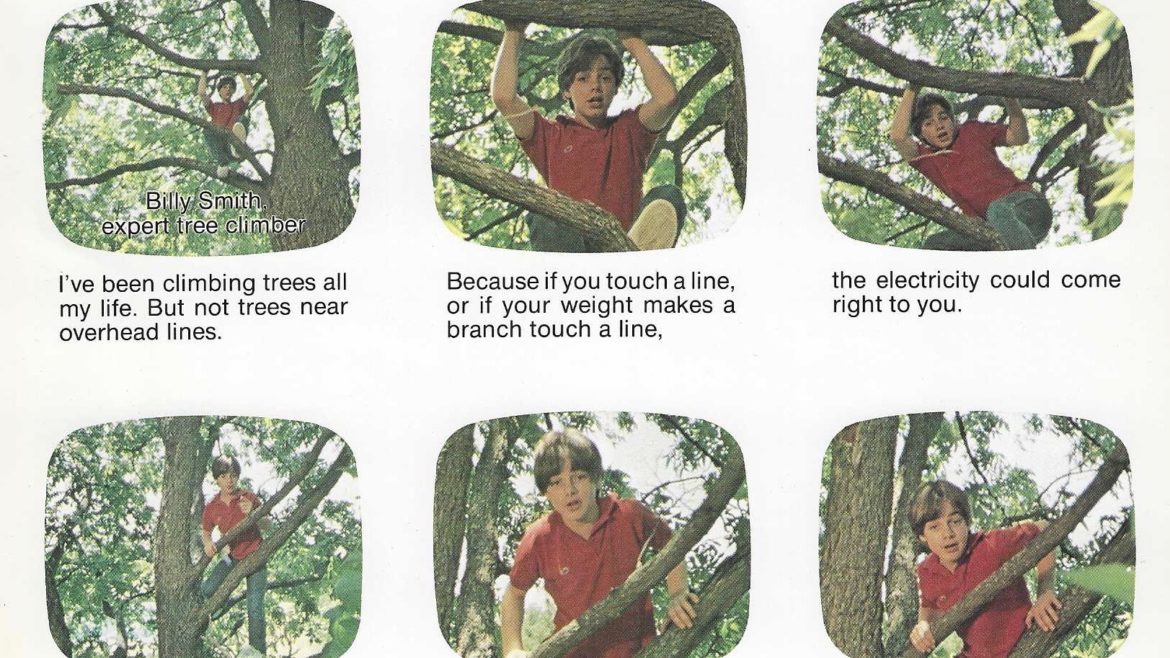 Firsthand accounts suggest the spot once existed, though exhaustive internet search for video proof — at least so far — has come up empty.

Frankly, Flatland was invited rather late to this search party. A relentless community of commenters who remember the PSA fondly have been looking for more than a decade.

A few “Find Billy Smith” Facebook pages exist, along with Reddit threads, YouTube remakes and chat room conversations from a time well before modern social media. In 2015, a member of the search party reached out to the “Mystery Show” podcast in hopes of unearthing the spot.

The majority of folks trying to solve the mystery are like Aaron Crim, holding on to a fading childhood memory of a half-mystical kid named Billy Smith and his safety message about climbing near power lines.

Having run each summer on local television throughout the 1980s, the thing is permanently burnt into his brain.

Crim admits he went “full Andy Dufresne” spamming curiousKC with a dozen or so inquiries regarding whatever happened to the old PSA, and it’s hard to blame him.

Across the niche corner of the internet, commenters relay the copy they remember from way back when, nitpicking the specific wording, while chasing crowdsourced leads left and right.

Aside from the bombardment while watching Saturday morning cartoons, Crim has a few guesses when it comes to the spots staying power.

“I guess when you’re a kid, just the fascination with the esoteric area of electricity, especially as a kid, you don’t know anything about it,” Crim said. “Plus the mixture of the idea of death thrown in there. Somehow it just captivated everyone that saw it. Somehow whoever wrote the thing happened upon the perfect script or something.”

High praise indeed for Bev Bellinger, the woman who wrote and helped conceive the PSA while working for Travis Walz Advertising (now Walz Tetrick Advertising) in 1980.

“I refer to myself sometimes as Billy Smith’s mother,” Bellinger said.

The KCP&L (now Evergy) project fell into Bellinger’s lap not quite a decade into her career as an ad copywriter. This particular creative brief called for a safety spot, a PSA in response to a few recent incidents of area children becoming badly injured after coming in contact with transformers and power lines.

Bellinger knew that nailing the copy was critical.

“It was like, well what are situations in which kids get in trouble?” Bellinger said, recalling the project’s early stages. A kid climbing a utility pole could get the job done, though tree climbing felt a bit more universal.

“I had my laundry list of things I wanted this spot to get across and wanted to say it the way a kid would say it. They wanted to have things out there that says this is nothing to mess around with, this can kill you. So that’s why I had Billy Smith say point-point blank ‘It might even kill you.’”

Not only what was said, but how it was said mattered to Bellinger as she drafted the script. Believability was of utmost importance, so she called on a neighbor who was around eight years old at the time.

“I said, suppose you wanted to tell your friend that something was dangerous and that they shouldn’t do it,” Bellinger recalled. “How would you tell them?”

Bellinger’s touchstone for childhood truth produced some paraphrasing for a script that sounded like a kid speaking to his tree climbing peers.

“Oh, definitely,” Crim said, when asked if he still remembers the 30-second message. “Billy Smith was self-professed to be a tree climbing expert and when you’re a kid it makes you stop in your tracks and be like wait a minute — you can be an expert in tree climbing?”

Billy Smith, of course, was not a real child, nor a tree-climbing expert. The latter point may be up for debate, however, considering the amount of times the actor who played Billy Smith climbed up and down the tree during the day of shooting.

Bellinger sat on the ground, watching her expert climb until his hands were raw, listening as he recited the lines that so many remember to this day, whispering an occasional curse word when he got them wrong.

And as for getting the wording just right for the video that hasn’t surfaced in some 20-plus years, Bellinger said she’s watched commenters closely — a lot of the time they get it wrong.

“A lot of them say, ‘So remember to look up before climbing’. Interestingly, my original script had ‘So remember,’ but he couldn’t get that. He kept saying ‘And remember’ and I’d mutter ‘So’ to myself,” Bellinger said. “I realized when we did the edits, ‘And’ was much more organic and it didn’t seem forced or odd, so I figured this isn’t worth going to the mat for, there’s thousands of different ways to say everything.”

The day of shooting wrapped and KCP&L had their spot. “Billy Smith,” a union actor at the time, went on his way, while Bellinger and the team at Travis Walz joked that the heavily syndicated spot probably put him through college.

The first time the PSA reentered Bellinger’s life, aside from seeing it on her own television, was in the early ‘90s, more than a decade after the spot debuted.

Bellinger was at breakfast with one of her daughter’s classmates, who she was mentoring ahead of confirmation in their church. The pair was getting to know one another over breakfast when she mentioned that she wrote ads for television and that the boy may recognize one about climbing trees. He interrupted and immediately began to recite the PSA word for word.

A couple of years later, a Shawnee Mission East High School newspaper reporter reached out to Bellinger for a story about Kansas City icons — what she now considers her “rock star moment.”

The Billy Smith spot eventually fell out of syndication, years have gone by without even a photo from the old PSA, yet the personal and press inquiries persist.

“People will occasionally just sort of show up and say, ‘Can we get a copy?’” Bellinger said. “Regrettably, I can only say, ‘No, I’m sorry.’ I am sure there is one somewhere, but it’s not in my possession.”

If it’s any consolation, Bellinger wonders where it is, too. Through years of personal investigation, she worries that her spot might be gone for good for two main reasons.

2. The PSA was purchased for syndication in other markets

If memory serves her right, the award-winning spot was shot on 16mm film in 1980, before most commercials were produced on video, making it hard to make things “look pretty.” The film would have had to have been transferred to other reels using technology that dinosaurs may have well pioneered.

Eight years ago, Bellinger was “on a crusade” for the reel. She was so sure of finding it in fact, that she reached out to “Billy Smith’s” wife on Facebook to ask for his permission to use the footage in her personal reel.

But rummaging around in the Walz Tetrick basement turned up nothing.

A few years ago, when the agency moved buildings, Bellinger learned a lot of the old archives had been tossed.

To make matters worse, local television stations might not even have the tape. After the PSA gained popularity locally, KCP&L was approached and the spot was sold for syndication in markets across the country to be aired with a different utility company’s logo stamped on the end.

“That’s why it’s disappeared,” Bellinger lamented. “We turned over all the original footage, all the dubbing copies, which a lot of them were kept at the TV stations or at the production houses and they’d do the dubbing. He took all of that and it was no longer our commercial, it was no longer KCP&L’s commercial. It makes your life flash in front of your eyes to think it’s somewhere in a trash heap.”

Good news for “Billy Smith’s” college fund, bad news for anyone curious about what happened to that old ad.

The name of whoever purchased the Billy Smith Tree Climbing Expert PSA from KCP&L escapes Bellinger, some 30 years after the sale. But she has it down to two potential buyers.

“I’ve been trying to remember his name — it’s either Dick Huff or Dick Wolf,” Bellinger said.

Surely, it couldn’t have been that Dick Wolf… the TV producer?

Bellinger thought the same thing. Until a quick Google search showed the producer had a career in advertising in the 1980s with Benton & Bowles, an agency based in New York.

If by some insane stroke of happenstance Wolf did purchase the spot, Bellinger isn’t optimistic that he’d still have the old reel. She said it’s most likely in a Facebook commenter’s attic, accidentally recorded on a VHS tape along with some local programming.

“I think when it unearths it will be something flukey like that,” she added.

“The search continues. It would be swell if we could all have a copy of this.”

While the whereabouts of the “Billy Smith Tree Climbing Expert” PSA remains unknown, Bellinger sent Flatland this never-before-seen post production storyboard, which includes shot-for-shot stills from the spot and that old familiar script.