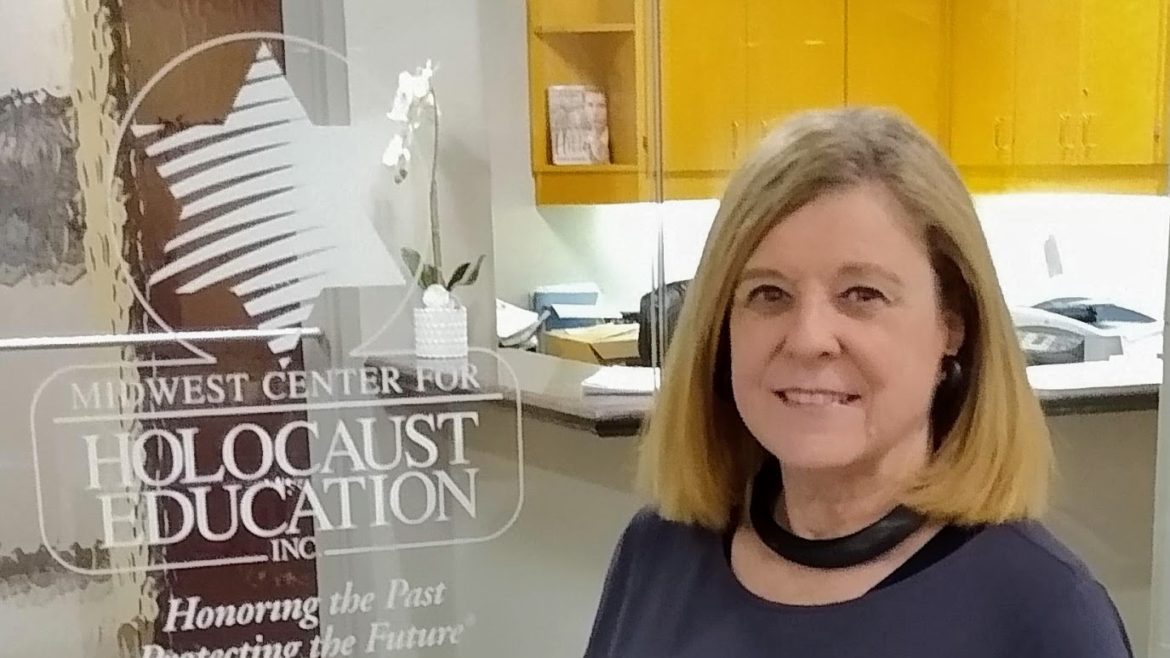 Jean Zeldin is retiring after 26 years serving as executive director of the Midwest Center for Holocaust Education. (Bill Tammeus | Flatland)
Share this story

Holocaust survivors Isak Federman and Jack Mandelbaum founded the Midwest Center for Holocaust Education (MCHE) in April 1993. By August, the center had hired its first executive director, Jean Zeldin, then a middle-school teacher in the Shawnee Mission School District.

Twenty-six years later, having helped to educate thousands of students and their teachers, to say nothing of many other adult area residents, Zeldin is retiring from that job, feeling an understandable — and justified — sense of accomplishment.

“I leave with mixed emotions,” she said. “This has been my life for 26 years and it’s been a good life. I’ve met incredible people. It’s been a very nice career. But I’m going to miss all of that and what comes with it. What makes it bittersweet is I’ve been here since the beginning. I’ve had this incredible opportunity to help create something and it worked. It’s grown beyond what anyone first envisioned.”

Adolf Hitler’s malevolent plan to destroy European Jewry almost succeeded. About six million of the nine million European Jews were murdered in World War II. MCHE’s job has been to teach generation after generation how and why that happened in an effort to prevent anything like that genocide from ever happening again.

Genocides of other kinds have occurred since then, and in recent years there’s been a global resurgence in antisemitism. Evidence of that was seen here in April 2014, when a neo-Nazi murdered three people at local Jewish institutions. Given all that, one wonders if Zeldin sometimes gets discouraged despite all of MCHE’s efforts.

“Every educator,” she said, “has days when you feel like you’re hitting your head against a wall. But to me, one of the positives to come out of Holocaust education is the way that the public now responds to some of these incidents.”

She’s heartened, for instance, by how the media and politicians now respond to antisemitic acts and speech by declaring “that this is not who we are, this is not appropriate, whereas the world sort of sat back in the 1930s and ’40s. At least in the United States we generally have the support of the public. You saw that here from the non-Jewish community and you saw that in Pittsburgh (after murders at a synagogue there in 2018). In general, we’re in a better place as far as the public is concerned. There are certain people you’re never going to change their mind. But as teachers you never really know whom you’re influencing or shaping.”

When Zeldin first came to MCHE, her main job was to coordinate the collection of oral testimonies from survivors: “I hit the ground running with that. This was conducted in conjunction with the Fortunoff (Video) Archive for Holocaust Testimonies at Yale.

“We felt the urgency of that because the survivors were in their 60s and 70s, and we didn’t want to be late,” Zeldin said. “We wanted to get them while their memories were still good.”

Today, several dozen videos containing survivors’ testimony are available on the center’s website. The still-living survivors (40-plus) in the Kansas City area no longer give talks as part of MCHE’s speaker’s bureau, but some of their children do.

From that early effort to document the survivors’ stories, MCHE has expanded and now offers training for teachers, an annual essay contest for students, regular programs featuring speakers and exhibits and a library containing more than 3,000 books and video resources.

Within a year or so of Zeldin starting work at MCHE, the agency hired a part-time receptionist, and now there are five full-time staff members.

MCHE over the years has had lots of support from non-Jews in the community. Indeed, quite a few MCHE board members and members of a council of advocates are non-Jews. “I think that brings a certain strength to the mission,” Zeldin said.

She’s always thought that no members of her extended family had perished in the Holocaust. But recently she learned that her paternal grandfather had siblings and maybe other family members who may have wound up in the Auschwitz death camp, which the Germans operated in Poland. She hopes to devote some of her retirement time looking into that as well as spending more time with the two children and seven grandchildren that she and her husband have.

“I wanted to leave,” she said, “when we were in good financial shape and had a competent and dedicated professional staff that I knew would carry this forward.”

Thanks to her leadership and great support from both the agency’s board and the wider community, that’s all reality today. So the task of educating new generations about the Holocaust and the necessary lessons to draw from it will continue, as it must. And it will continue under an excellent new director, Jessica Rockhold, now associate director and director of education.

(Disclosure: I serve as a volunteer member of the MCHE Council of Advocates.)