My, How the Garden Grows

Above image credit: A Mitzvah Garden sunflower provides a perch for a monarch on a summer evening. The volunteer-run operation in Overland Park is unique among area community gardens for its size, infrastructure, and approach to planting. (Photo: Mike Sherry | Flatland)

Located among strip malls, office buildings and rows of uniform houses, The Temple, Congregation B’nai Jehudah in Overland Park is in the heart of suburbia.

But park your car behind the temple, which sits on Nall Avenue a little south of 119th Street, wander up a winding dirt path, and you will find that you’ve left the suburbs and reached a rural oasis.

The Mitzvah Garden, a volunteer-run community garden housed on land owned by the temple, has transformed a suburban lot into fertile ground that annually yields some 10,000 pounds of vegetables for area food pantries.

The bounty of the garden, which measures three-quarters of an acre, includes tomatoes, peppers, cucumbers, onions, squash, potatoes and more. Bees buzz around rows of sunflowers. And purple martins feast on insects while making their home in four whitewashed gourds that dangle overhead.

Beekeepers Benefit From The Hive Mind In Community Apiaries

Today the garden boasts a sophisticated water-capturing structure that feeds a solar-powered irrigation system. But when the garden was founded in 2010, it was merely a vague idea conjured up by a banker, a psychiatrist and a marriage counselor.

“We had all this land, and we were doing nothing with it,” said Andrew Kaplan, the banker in that founding group, who was then president of the B’nai Jehudah congregation. “We started asking, ‘What could we do that would be socially responsible and make a difference?’”

That founding group, which also included Larry Lehman, the marriage counselor, and Ken Sonnenschein, the psychiatrist, was made up of passionate and enthusiastic dreamers who had a vision of growing food to feed the city’s hungry — living the Jewish saying, “tikkun olam,” which means “to heal the world.”

“We had all this land, and we were doing nothing with it. We started asking, ‘What could we do that would be socially responsible and make a difference?’” —  Andrew Kaplan, Mitzvah garden founding member

For the most part, though, what the group had in vision, it lacked in actual farming expertise.

Sonnenschein, who had been involved with starting a small garden at the nearby Village Shalom retirement complex in 2000, had the most experience. But the other co-founders were novices.

“We just had to learn,” Lehman said.

The group secured seed capital from Beans and Greens, which was part of the Menorah Legacy Foundation; sought help from local nonprofits focused on agriculture education; and, one by one, brought on a band of faithful volunteers with various technical skills.

“I was excited that they started out with a vision that was as big as it was,” said Katherine Kelly, executive director and co-founder of Cultivate Kansas City, who has consulted with the Mitzvah Garden since it started. “They really wanted to grow food. They wanted to get people involved. They wanted a lot of hands to touch the garden.”

In all, between 400 and 500 volunteers work in the garden each year in some capacity. This includes Sunday school classes, Scout troops, high school students, corporate groups and once-in-awhile volunteers. But it also includes a core group of about a dozen people who regularly get their hands dirty planting, harvesting, maintaining and building the garden’s infrastructure.

Regular work times are Sunday mornings from 8 a.m. to noon. But it’s possible to find people working other times as well.

On a humid Wednesday evening in late August, the job at hand was treating the garden’s beehives with oxalic acid. Beekeeper Robert J. Burns, one of those experts who has come on board, said the vaporization treatment would destroy mites that had infected the garden’s hives.

“We came last week to treat and discovered that the bees had already abandoned one of the colonies,” Burns said with clear regret as he set up the treatment, which would be harmless to the remaining bees.

Grapevines offer a sweet welcome as they cover an arbor at the entrance to the garden. The winding path leading to the entrance is modeled on the trail leading to the top of Masada, a mountain fortress in Israel, where Jewish patriots made a last stand against the Roman Army in 73 A.D. (Photo: Mike Sherry | Flatland)

Volunteers constructed these Stars of David, which are placed amid the garden's blackberry bushes. (Photo: Mike Sherry | Flatland)

Volunteer Joe Karbank trimmed one of the pear trees that dot the land surrounding the garden. He has used grafts to transform the trees into a species that bears edible fruit. (Mike Sherry | Flatland)

These bees are clustering on a comb, where they are laying eggs that await fertilization by the queen. The substance on the comb is wax. (Photo: Mike Sherry | Flatland)

Beekeeper Robert J. Burns inspected one of the combs as he prepared to spray the hive for mites. (Photo: Mike Sherry | Flatland)

While bees have always been an important part of the Mitzvah Garden’s carefully planned ecosystem, this year marked the first season the garden maintained its own bees — three colonies with about 50,000 bees each. This summer, Lehman is proud to report, the Mitzvah Garden bees produced about 100 pounds of honey.

The garden is selling the kosher honey — 13 gallons in all — at area synagogues for Rosh Hashanah, the Jewish New Year, a two-day holiday that began Sunday evening. Eating apples dipped in honey is a traditional part of the holiday.

The sales will raise a little bit of money for the farm. But most of the Mitzvah Garden’s annual budget — between $5,000 and $7,000 — comes through donations. Organizers have also done a fair bit of additional fundraising and grant writing to pay for capital projects.

Kaplan estimated that about $50,000 has been invested so far. That includes sturdy cattle panel fencing around the crops to keep out deer; the 22-tank water-collection infrastructure that can capture as much as 6,000 gallons of rainwater (enough, with rainfall, to keep the garden from requiring city water); and, the newest addition, solar energy panels, which collect power that pumps water to the garden’s drip irrigation system.

“We used to have the world’s longest hose and largest extension cord,” Kaplan said. “Now, we’ve cut the cord.”

The solar panels, installed last year, were funded through a $3,500 microgrant from Kansas City Power & Light. They marked a major improvement that moved the garden fully off the grid. 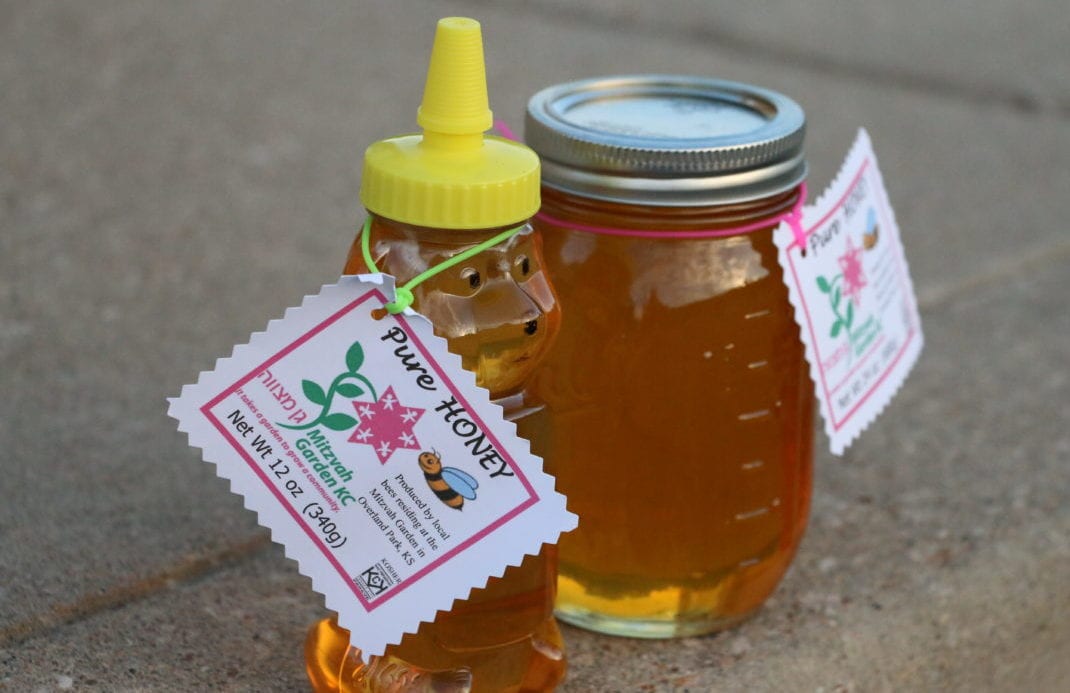 Kelly of Cultivate Kansas City said the Mitzvah Garden is unique among the many community gardens in the Kansas City area. Its size, infrastructure and the organizers’ approach to planting crops for the entire farm, rather than letting individual gardeners plant their own plots, make it more like a small farm than a community garden.

“They’re not quite a production farm,” Kelly said. “But they’re heading in that direction.”

The garden is strategic about the crops its plants and how it plants them, so the land can be as efficient as possible. The bounty, after all, is going to make sure people in the Kansas City area who are in need have access to fresh produce.

“Tomatoes and peppers are expensive in the grocery store. And a homegrown pepper or homegrown tomato is much different that what we can buy in the store,” she said. “It’s a luxury when you consider the expense of fresh produce.”

The Mitzvah Garden supplies fresh vegetables to about half a dozen food pantries in the Kansas City area.

Growing fresh food to share with people in need is why the garden’s organizers wanted to transform this expanse of suburban real estate in the first place. But they also had another motive, which is reflected in the garden’s motto: “It takes a garden to grow a community.”

Judging by the many people who have been drawn to the garden over the years, it also has lived up to that motive.

Joe Karbank, who is in his 80s, is a good example. He came to the Mitzvah Garden looking to transplant fruit trees onto the garden grounds. He and his trees were welcomed, but Karbank, a retired gardener, landscaper and hobby farmer, did more than plant them. He stayed to become an active participant.

Karbank could be known as “Johnny Pear Tree,” Lehman said. He has managed to graft pear tree stems onto wild Bradford pear trees, which dotted the garden. Bradford pears do not bear edible fruit but have strong root systems that Karbank decided to take advantage of.

He loves the work, but he also likes the people he’s met through the Mitzvah Garden.

Karbank was at the garden planting a tree on April 13, 2014, when Frazier Glenn Miller Jr. killed three people at Village Shalom and the Jewish Community Center. That peach tree is dedicated to the shooting victims and stands as a reminder of the good in the community that the Mitzvah Garden represents.

Sonnenschein said this garden truly has brought people together to do good and “raised a community.” He likes to point out that the sunflowers soaring this time of year are symbolic of this philosophy.

“The sunflower looks, from a distance, like one big, beautiful flower,” he said in a video about the garden. “Actually, it’s made up of thousands of little individual flowers that come together to form one community. One big, beautiful community.”

— Suzanne King is a freelance writer based in Kansas City, Missouri. To comment, leave a note below or find us on Twitter @FlatlandKC.