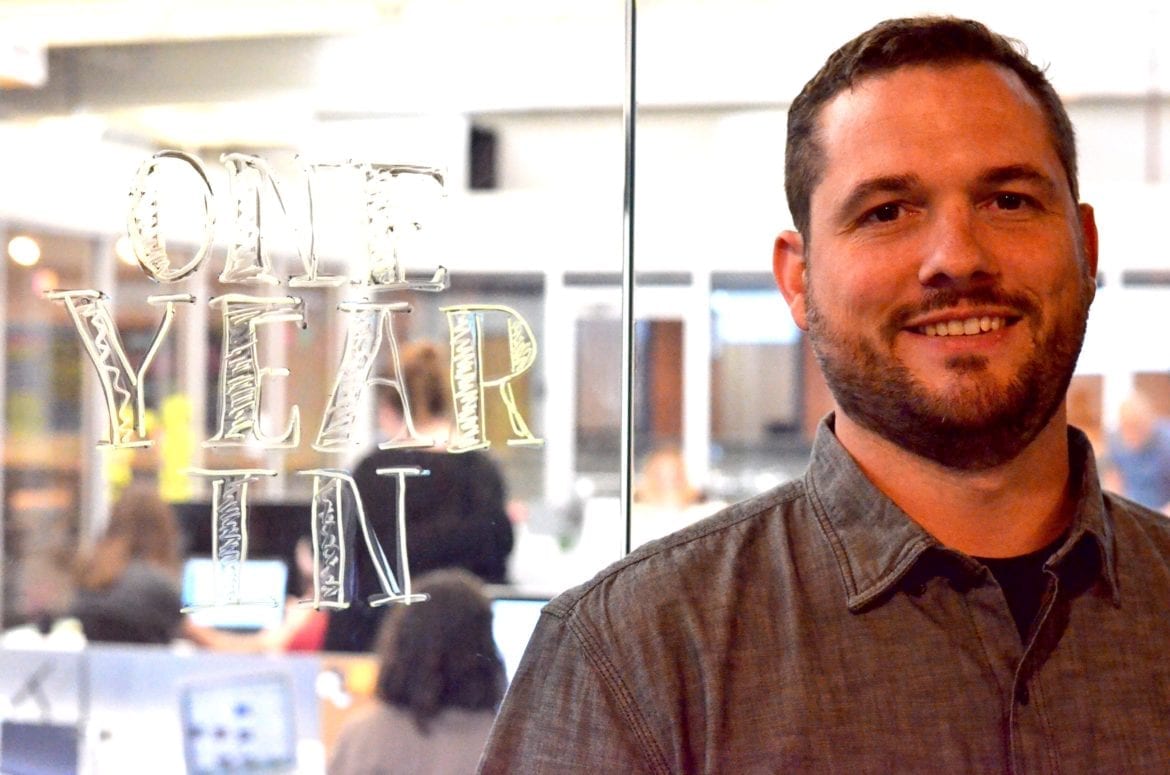 A year ago, Justin Prestige was starting a rebranding of his company. Today, he runs a two-man team handling food trailer design and procurement. (Photo: Austin Kuehl | Flatland)
Share this story

Food trucks, food trailers: They may have come to prominence as a whimsical urban trend, but they’re an industry now.

Justin Prestidge is living proof of that. His growing firm specializes in the design and sale of food trailers, from full kitchens to snack bars. One year ago, Prestidge spoke to Flatland at BetaBlox Demo Day. Today, he’s running a two-man team handling food trailer design and procurement for a national market from Grandview, Missouri.

What has changed since BetaBlox Demo Day 2015?

“[W]e were already heading in the direction of rebranding our company, and so we have fully gone through that. So we were Trailer Bid a year ago, and although nothing with the company has changed, we’re now operating under the name Custom Trailer Pros to more accurately describe some of what we do. We have gone from selling a whole variety of different types of trailers to where our No. 1 focus is food trailers.”

Why did you choose to pitch at BetaBlox, and what did you learn?

“I knew I was at a point of wanting to grow and take some specific steps forward. As someone who was working on the company by myself, I wanted to be surrounded by people who had more experience and knowledge than I did to make sure the steps I was taking were the right ones. I was immediately surrounded by a very diverse group of people that were really, really helpful to me as I took the next steps.”

You have spent your entire career in small business, what attracted you to it?

“I like the personal touch that you can put on things when you’re in small business. In a larger setting, it’s easy for employees and customers to get lost in the shuffle. What’s really important to me in my business and every business I’ve been involved in is the personal interaction. We develop a relationship with our customers, and that relationship carries on for months at a time, sometimes longer.”

What was your best decision as a small businessman?

“Making the right hires. I’ve made the wrong hires, and it’s been really detrimental. A year and a half ago, I made the right hire, brought a guy in who was a really great fit. His personality type is different than mine, and that’s been a huge benefit to me.”

“When I first started, I thought everything was going to be dreamy. I was going to make lots of money right away, sales were gonna just keep climbing and all this stuff. I hired two sales guys, I hired an assistant, worked out of this nice office space and all of that stuff. And none of those were the right move.”

At Demo Day 2015 you were upbeat about the availability of venture capital. How did you arrive at this opinion, and has it changed?

“I arrived at it because I’ve seen people who have venture capital and are wanting to invest it — they’re just looking for the right opportunity. Here in Kansas City, or here in the Midwest, there’s kind of this image that the venture capital is really tight, but I’ve seen a lot of businesses who have been able to secure money. There’s a lot of startup that’s going on; the startup culture’s very strong in Kansas City.”

How does Kansas City stack up nationally? Can we compete with Silicon Valley, Seattle and so on?

“I think that we’re getting there. Are we a direct competitor right now, today? I would say that those places are further along than we are here in Kansas City, but what I do enjoy seeing is that Kansas City hasn’t given up or stopped working towards that. All the new development that’s going on, the fact that we will have the largest co-working space. A good majority of people that will be working there are startups and small businesses. To me that speaks to the idea that the startup ecosystem of Kansas City is alive and well and thriving and growing.”

One Year In | As VR Increases in Popularity, so Does Virtutecture

One Year In | Crema Moves to Shorter Name and Larger Team