Truman Library Getting Even More Wild About Harry 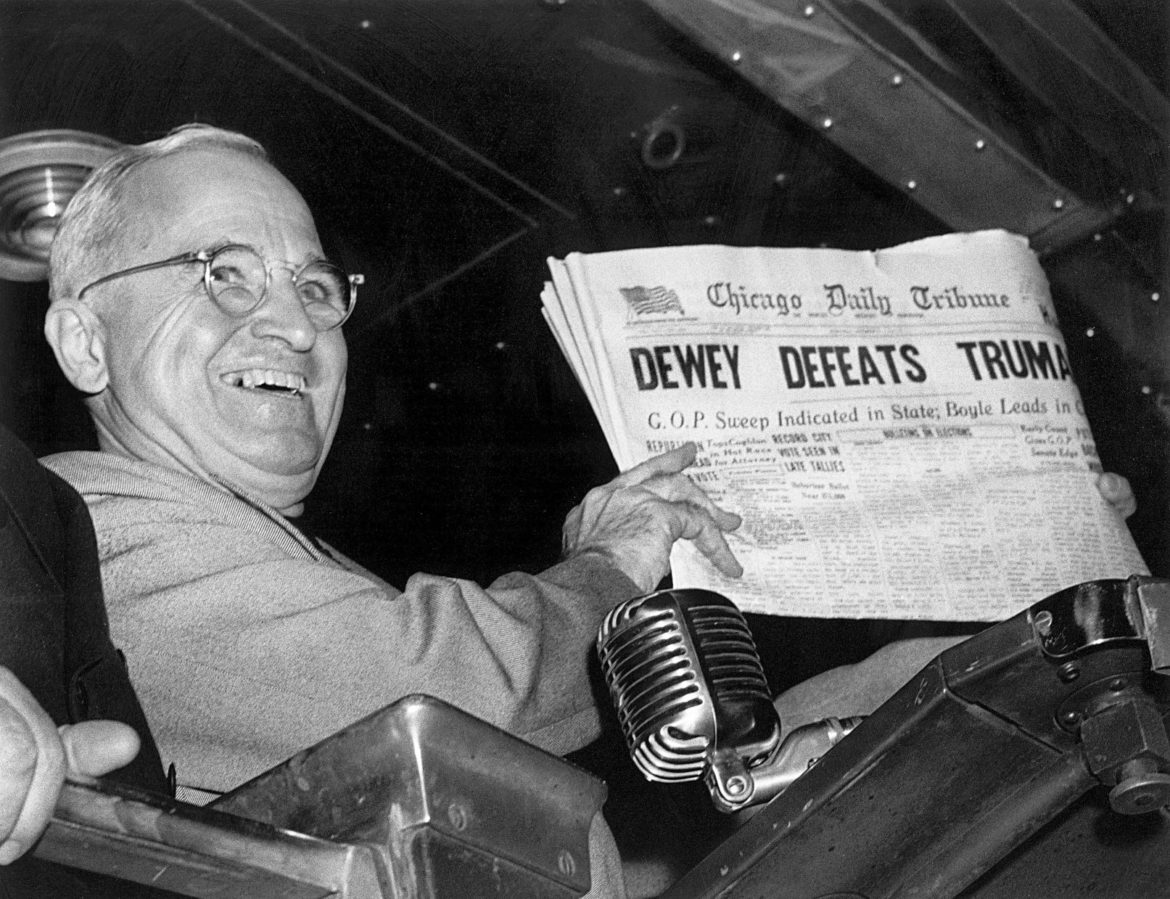 This summer they shuttered the museum and announced a $25 million upgrade.

One reason: Harry Truman’s story has become too big for the building.

A new 12,000-square-foot permanent exhibit is expected to be unveiled in the fall of 2020 to coincide with the 75th anniversary of the Truman presidency. The exhibit will present the many episodes in the 33rd president’s story – his leadership of a World War I artillery battery, his choice to deploy atomic weapons against Japan in 1945 and his still-debatable decisions made during the Cold War of the 1950s – in sweeping chronological fashion, augmented with cinematic production values. In its previous configuration, the Truman story had to be spread over two different floors.

Fundraisers already have secured commitments for approximately $26.5 million. While the renovation will cost $25 million, officials hope to raise an additional $5 million for programming and other projects. The campaign’s success in securing support from both private and public sources speaks to the enduring appeal of the former Missouri farmer whose principled decision-making and unique personal style – sometimes salty, always civil – seems especially appealing today.

“We pine for that kind of leadership, on both sides of the aisle,” said Kurt Graham, Truman Library director.

“Everybody is so much at each other’s throat right now,” added Clifton Truman Daniel, eldest grandson of the former president and member of the Truman Library Institute, the library’s nonprofit support arm which is leading the fundraising.

“And there is so much lying going on, just bald-faced lying. You look to a guy who didn’t do that – a man who took pride in telling people what he thought and what he meant, and told the truth, and did his job.”

Fundraising for that initial renovation first was announced in 1994 by Truman Library officials who knew that visitors with personal memories of the Truman Administration were collecting Social Security benefits.

At the time, there was an urgency to connect with younger visitors ever more comfortable with interactive digital technology.

Accordingly, visitors to the library’s “Presidential Years” exhibit, curious to learn about Truman’s decision to deploy atomic weapons against Japan in 1945, were confronted with a bank of video screens simultaneously displaying newsreel coverage of several competing realities – the race to produce a nuclear device, the firebombing of Japanese cities and the island-hopping campaign of American forces in the Pacific edging close to Japan.

Elsewhere visitors were invited to sit down in one of two “Decision Theaters,” where they watched video summaries of Truman’s 1948 decisions to desegregate the military or recognize the infant state of Israel and then register their own opinions as to how Truman made those decisions.

Such immersive experiences will be made more so in the upgraded exhibit.

Truman Library officials have selected Gallagher & Associates, a Washington, D.C. area museum design firm that lists among its client institutions the Lyndon Baines Johnson Presidential Library in Austin, Texas, as well as the National World War II Museum in New Orleans, the International Spy Museum in Washington, D.C., and the Rock and Roll Hall of Fame in Cleveland.

There will be new “sound and light theaters” devoted to World War I and the Cold War of the 1950s, as well as a 14-foot-diameter “interactive globe” showcasing the post-World War II peacetime challenges faced by Truman.

The slideshow below depicts several upgrades as part of the renovation of the Truman Library. (Courtesy | Truman Library Institute)

Still another exhibit will be designed to produce a reasonable facsimile of the fears that help drive the Cold War.

In what is being described as a “Loyalty Review Board role-playing game where players uncover government disloyalty during the Red Scare,” visitors can experience the real-life drama provoked by Truman’s 1947 executive order establishing a program meant to gauge the loyalty of federal employees.

In this game, players will be prompted to sit at a table and ask awkward questions of other visitors.

“We would be mortified by some of these questions today,” Graham said. “ ‘Do you know any homosexuals?’ ‘Do you attend church regularly?’ “

Graham said some thought those with different lifestyles might be more open to being bribed by a foreign adversary. The role-playing exercise, Graham added, “will allow you not to just interact with a database, but interact with other visitors and learn whether or not you get voted off the island… What we want to do, of course, is promote further discussion.”

The updated Truman story will be more seamless. Visitors to the previous permanent exhibits entered the “Presidential Years” gallery on the library’s first floor to explore the almost eight years of the Truman presidency before descending to the basement level to explore the “Life and Times” exhibit – the story of Truman’s life before the White House.

“They were wonderful exhibits, but we needed a more continuous flow,” Graham said. “You want to encounter who he was before you get to the presidency, otherwise you don’t have any context for how extraordinary his rise was.”

That included Truman’s political near-misses such as the close 1940 U.S. Senate Democratic primary, as well as his 1922 Democratic primary election for eastern Jackson County Judge, in which Truman prevailed despite an election-day ballot-theft plot.

“There were any number of times when his trajectory could have been interrupted,” said Graham.

The money raised to fund the renovation has been pledged in comparatively quick fashion.

During the 1990s, the Truman profile had never been higher. Historian David McCullough published his Pulitzer Prize-winning biography in 1992, while the Gary Sinise-starring HBO film based on that book appeared three years later.

“It was a time of Trumanmania,” Graham said.

Although fundraisers eventually raised $22.5 million from private and government sources, it took them about five years to do so.

For this capital campaign, however, the $25 million renovation cost was met in about two years.

CCS Fundraising delivered its encouraging feasibility study in the summer of 2017, and Truman Library Institute members approved the campaign the following September. Amounts from private donors today total about $20.5 million, with the remaining approximately $6 million balance courtesy of state and federal appropriations.

To donors the Truman story represents a sound investment, Graham said. In recent presidential rankings, Truman – if he is not Rushmore-ready – remains top tier.

“He is usually ranked just behind Washington, Lincoln and the two Roosevelts,” Graham said.

“The current occupant of the White House has increased our country’s focus on the presidency and presidential decision making,” Burden said.

Yet, for all that, Truman continues to occupy a unique corner in the American emotional memory.

When Truman left office in 1953, he recorded some of the lowest approval poll numbers ever tabulated. But his standing began to improve dramatically during the early 1970s years of Watergate.

For Daniel, it was almost exactly 20 years after his grandfather left office when he gained a vivid new appreciation for the unique historical regard the 33rd president commands.

In the mid-1970s, while he was attending a Massachusetts prep school, a fellow student insisted he listen a song on the new album he’d just bought.

The song was “Harry Truman,” recorded by the rock group Chicago.

“I remember just being stunned that a rock band was singing about my grandfather,” Daniel said. He was used to encountering his grandfather’s legacy in his 20th Century American History seminars – not in the dorm room down the hall.

Today Daniel has an intimate knowledge of just how fondly Americans consider his grandfather’s memory.

For years Daniel received the fervent thanks of American World War II veterans who insisted that his grandfather’s decision to use the atomic bomb in 1945 saved their lives.

In recent years, meanwhile, Daniel also has been interacting with a different demographic – the community of survivors of the Hiroshima and Nagasaki atomic bombings authorized by his grandfather.

Those have included Masahiro Sasaki, the brother of Sadako Sasaki, a Hiroshima child diagnosed with leukemia some 10 years after the blast. During her hospitalization Sadako followed a Japanese tradition that a wish would be granted her following the folding of 1,000 origami paper cranes.

Sadako folded an estimated 1,300 such cranes before her death, in 1955, at age 12. Over the years the cranes she fashioned have come to be regarded as symbols of peace and reconciliation.

In 2010 Daniel met Masahiro Sasaki, who during that encounter placed in Daniel’s palm what he identified as one of the last cranes her sister folded.

During a 2015 ceremony in the Truman Library courtyard Sasaki formally presented that crane to the library.

It’s Daniel’s hope that the expanded Truman Library museum exhibit, for all its gizmos and cinematic sweep, will reserve a place for the humble one-inch-tall artifact.

“Not only will we bring better technology to telling my grandfather’s story,” Daniel said, “but the renovation will also leave us room to take it into the future and include some of the off-shoots of his legacy – including a tiny crane folded by a child who died as a result of the bombing and who regarded the crane as a symbol of peace.”