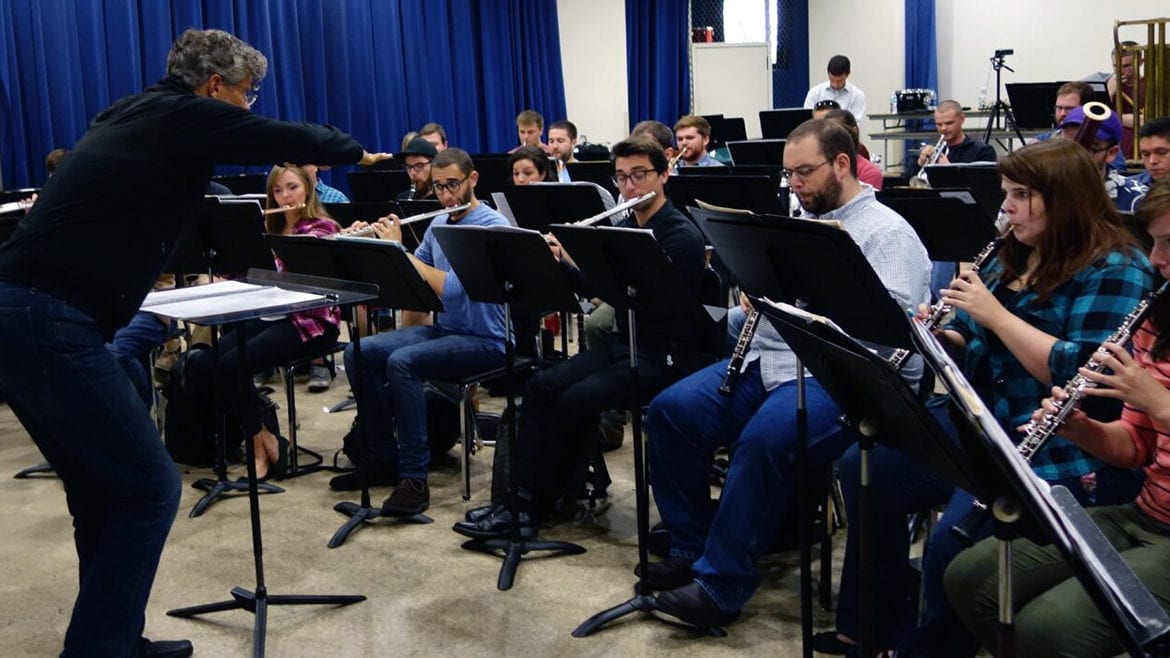 Steven Davis conducts a rehearsal for the UMKC Conservatory Wind Symphony in advance of next week's off-campus performance at the Folly Theater. (Photo: Dan Calderon | Flatland)
Share this story

For Steven Davis, who serves as the chair of large ensembles at the UMKC Conservatory of Music and Dance, a student performance next week highlights the conservatory’s greatest strengths — a partnership with city’s performing arts community, collaboration with guest performers and composers, and original music from the conservatory’s acclaimed composition program.

That performance will take place on October 26th at the Folly Theater, where the conservatory’s Wind Symphony and Wind Ensemble will perform a joint concert showcasing a range of pieces that include traditional, modern and student compositions.

The joint concert will be performed by a quarter of the conservatory’s total student population, with higher-ranked auditioners comprising the Wind Symphony. And Davis, who will conduct the Wind Symphony’s pieces, said the quality of musicianship far exceeds the ages of its musicians.

“These students are incredible. They play at the highest levels of professional sounds. They’re inspired and inspiring,” Davis said. “It’s fun to watch that youthful energy and their commitment to excellence on stage.”

The conservatory, which has operated in various formats since 1906, offers undergraduate and graduate degrees in a number of areas, including music education, vocal studies, keyboard studies, jazz studies, dance, instrumental studies and musicology/composition – the latter of which will be displayed during the scheduled performance.

Wind Ensemble Conductor Joseph Parisi said it will be a rare chance for the ensembles to play off campus together.

“The conservatory bands are respected in our discipline as a being one of the strengths of the conservatory. It’s become very exciting to watch us do that together,” Parisi said. “And having every student who plays a wind or percussion instrument under the same roof, playing music for the same audience and getting to hear each other and support each other as a conservatory band — that’s what’s exciting for me.”

Both conductors are particularly excited about the musical pieces chosen for the joint performance.

The Wind Ensemble will perform “America First: A March of the States,” written by John Philip Sousa and celebrating its centennial this year. Parisi explained that the politically-charged, sometimes sarcastic march is Sousa’s opposition commentary to the nationalist ideals of then-President Woodrow Wilson’s administration. Parisi noted that the defiance in the music bears some resemblance to the divisiveness of modern politics.

The Wind Symphony will premiere “Eclipse,” a composition written specifically for the band by Arsid Ketjuntra, a student of the conservatory from Bangkok, Thailand. Davis described the 10-minute piece as a modern exploration of colors and sound representing darkness and light.

“I finished it a year and half after we first met,” Ketjuntra wrote to the Wind Symphony in the performance program. “It is full of wonderful memories. The music follows a poem that reflects my thought. Once in awhile, when I got off work and my busy life, I looked at the sky and imagined how short my days were there. However, I was happy being there.”

Both ensembles will perform pieces by Anthony Plog, a visiting composer and special guest of the conservatory. Plog, who began his career as a trumpet player, performed with the Los Angeles Philharmonic, and now serves as a professor at the Norweigian Academy of Music. He will be visiting the conservatory to provide guest instruction next week, including a brass master class.

For its Plog piece, “Three Miniatures for Tuba and Wind Ensemble,” the Wind Symphony will be joined by Thomas G. Stein, associate professor of tuba and euphonium at the conservatory. Stein noted that the piece was originally written for piano and adapted for wind ensemble, which has presented some challenges, but he was confident in the student abilities.

“The band is going to have to work hard for that one. And it’s not because it’s a million notes a second. It’s just one of those mind-boggling, rhythmic pieces,” Stein said. “These are fabulous kids and they are playing at a professional level. They push me big time and I hope I can keep up with them in the end when we do this live.”

— Dan Calderon is Kansas City native and contributor to Flatland. You can contact him by emailing pdancalderon@gmail.com, or on Twitter @dansascity.