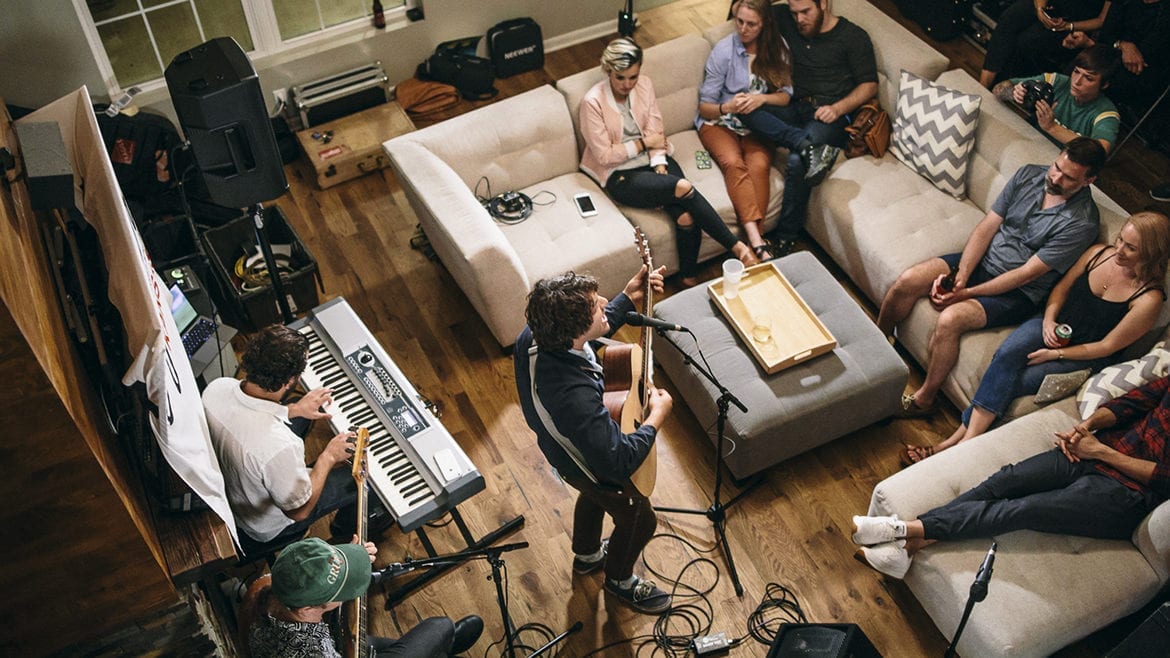 Star Parks (Austin, TX) performs at the Sofar Sounds Concert on September 16, 2018. The band scheduled the gig at the end of a short tour to squeeze in one more relaxed gig on their way back to Texas. (Anna Selle | Playlistplay)
Share this story

One of the most annoying things I’ve noticed about getting older is how much more sensitive I am to hassles. My fly-by-the-seat-of-my-pants 20s have been replaced by a more calculated 30s, where most of my decisions regarding evening activities require in-depth analysis using an entirely arbitrary annoyance scale.

This can sometimes make it difficult to enjoy live music, as concerts typically require travel, parking, planning, expensive beers, disrespectful crowds, and lots of standing in one spot until your calves and hamstrings burn. And when considering all that, even bands I enjoy run the risk of losing out to the comforts of my quiet couch and a homemade cocktail.

That’s where Sofar Sounds is a godsend.

It works like this: Sofar Sounds ambassadors curate shows in secret, non-music venues, inviting three mystery bands to play shorter sets on scaled-back stage setups to smaller crowds. What you get is a more intimate performance, a more attentive audience, a greater sense of community and an avenue for music discovery.

The program has been a resounding success since it began in 2009 in London, growing to nearly 420 cities worldwide, and boasting more than 500 gigs a month. Hank Wiedel, ex-drummer for local band Captiva and talent buyer with Mammoth Productions, founded Kansas City’s chapter in 2016 after he performed at a Sofar show in St. Louis.

“From an artist perspective, it was a really fresh way to approach live music,” Wiedel said. “It’s a built-in crowd and the artists don’t have to do any promotion. And so it becomes a crowd of people who are really willing to listen. I thought it was something that would benefit not only Kansas City artists, but the artists coming through the city who might not always get the kind of audiences they’re looking for. And I hoped that might help change the perspective of us as a flyover market.”

I knew about Sofar mostly from from articles and videos — that is, before last Sunday, when I had the privilege of hosting Wiedel, his crew and three artists he selected — Tom West, Noa Jordan and Star Parks — along with 50 strangers for a concert in my living room. 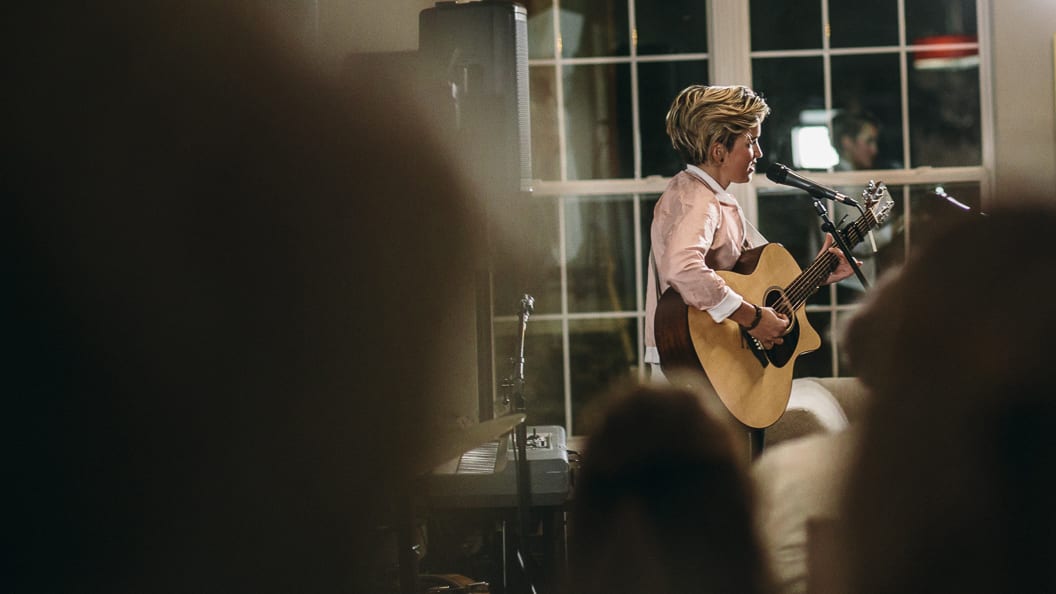 It was an incredible experience, and I learned a few things in the process:

Once again, I know nothing about music

This one is always a tough pill to swallow.

I write a music column. I frequent indie music blogs on a daily basis. I spend my days sifting through curated playlists for emerging artists. Yet, despite all of that, I had never heard of the three artists who played at my Sofar. And that made it all the more damaging to my ego when they turned out to be so damn talented.

Music discovery can be a nebulous practice. Actively looking for music that suits your specific tastes, like I do, is a good bet, but it has its limitations. There is something about forcing yourself out of your comfort zone and hearing an artist for the first time in a live setting that can make an instant fan out of you. To that end, all three of those artists gained a new follower after Sunday night.

Sunday was my first time hosting or attending a Sofar show. I had plenty of preconceived notions heading into the evening, but what I didn’t expect to see was such a diverse crowd. Some attendees were tattooed teenagers, some were conservatively dressed senior citizens. The rest were everything in between.

You would think it takes a specific type of person to go to a new place to watch musicians that were kept a secret until the beginning of the event. To that end, I tried my best to talk to people and get a sense for the ties that bound us all together into that room. The closest I got was a general acknowledgment with smiles on every face.

The Sofar artists and audiences are a gracious bunch

Live shows aren’t typically a social affair. You go with your significant other or your group of friends and exist in the crowd as an island amongst other islands, staring in unison at the stage. This is not the case with a Sofar gig.

I’m fairly certain I had a conversation with every person and every artist in attendance. And in doing so, I recognized that everyone was not only happy, but they were effusively gracious for the venue, the audience and the opportunity to be a part of the environment. At the risk of sounding nauseatingly cheesy —  it was an all out lovefest.

No danger with these strangers

It can seem like a big risk to invite 50 strangers into your home. The show I hosted was a BYOB affair, and I was apprehensive it could get out of hand. People enjoyed their own drinks and enjoyed the music, but were otherwise remarkably respectful. Nobody wandered around the house or rifled through the pantry.

The Sofar crew markets hosting gigs as a no-hassle way to be involved, and it could not be more true. The lead crew set up the stage, event posters, and a merchandise room. The only finger I lifted during the entire event was throwing some ice in a beer bin for the guests. And after it was all done, the Sofar crew cleaned up the gear and the mess. Aside from the car left in my driveway — presumably by someone who elected to Uber home — there was no trace the concert even occurred.

One second my living room was awash in sound and teeming with bright, friendly music-lovers. Thirty minutes later, after the crew waved their goodbyes and walked out the door, I was left with an empty house. After such an intimate slate of inspiring music and such an abundance of good-natured people, it was hard to see the place so lifeless.

And as I looked around, one thought came to mind: I’ve never been so depressed by a clean living room.

— Dan Calderon is Kansas City native, an attorney, and contributor to Flatland. You can reach contact him by emailing pdancalderon@gmail.com, or on Twitter @dansascity.

This post has been updated to reflect the correct spelling of Hank Wiedel’s name.