The use of popular music at political events tends to ruffle artists’ feathers. And there’s not much they can do about it. 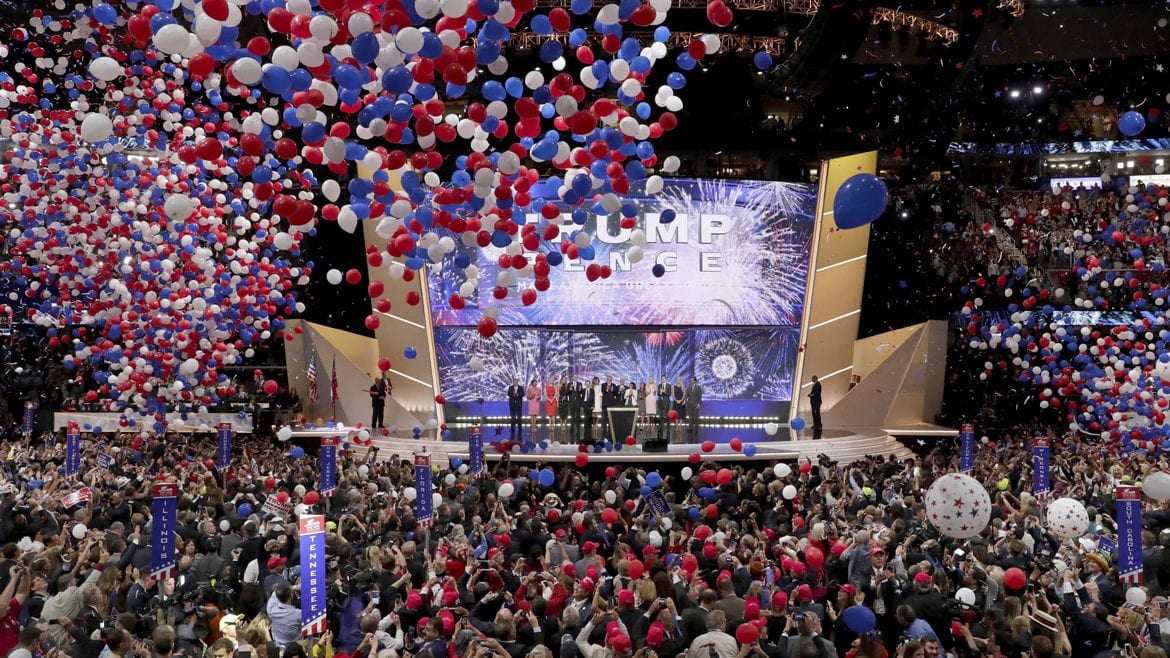 Republican Presidential Candidate Donald Trump and Republican Vice Presidential Nominee Gov. Mike Pence of Indiana are together on stage while the Rolling Stones' "You Can't Always Get What You Want" plays during the final day of the Republican National Convention in Cleveland, Ohio. The Stones tweeted that the music was used without the band's permission. (Photo: J. Scott Applewhite | AP)
Share this story

Last week in Cleveland, Ohio, as an overhead PA system boomed Queen’s “We Are the Champions,” an awkwardly hunched silhouette of Donald Trump, draped in fog, preceded the presidential candidate’s entrance to the Republican National Convention.

And almost as quickly as Trump’s own hot air had whisked away the lingering fog, Queen had denounced his use of the song, claiming it was both unauthorized and against the band’s wishes. But the image of Trump’s triumphant entrance had already been etched into our minds by that point, so the damage was already done.

An unauthorised use at the Republican Convention against our wishes – Queen

Popular music has always had a place in politics. And the calculated placement of a big, stirring anthem can be effectively employed to frame a narrative about a candidate or platform, or simply pump up a crowd.

Joyce Allegrucci, who served as campaign manager for former Kansas Gov. Kathleen Sebelius, said music can be a powerful tool in politics.

“Music is a universal language,” Allegrucci said. “Music tells stories and reinforces stories. It creates feelings in people. Candidates want to make a strong connection with people, and music has always seemed like a great way to do that.”

Typically, candidates hoping to incorporate an artist’s music in their campaign follow one unspoken golden rule: Ask permission first. Unsurprisingly, Donald Trump has operated as though that rule does not apply to him. So far in this election cycle, his list of unauthorized campaign music includes big names like The Rolling Stones, Elton John, Aerosmith, Neil Young, R.E.M. and Adele – all of whom immediately asked him to stop.

So why aren’t these industry titans suing?

The answer to that question gets complicated. Playing a song at a political event is deemed a public performance of that song – whether it is the recorded version or a cover from a live house band. And public performances have their own licensing and royalty structure.

The basic arrangement is this: Songwriters and publishers register their individual songs with Performing Rights Organizations, like BMI and ASCAP. These PROs license their catalogues of music to subscribers — usually organizations, restaurants, radio stations, venues and television networks. The PROs then monitor and collect royalties based on the public performance of the music, and distribute those royalties to the rights holders.

As such, if either the RNC organizers or the convention venue, Quicken Loans Arena, paid the necessary ASCAP dues, the Trump campaign likely won’t suffer any consequences for using Queen’s music. That may seem unfair to Queen or other artists looking to control the use of their music, but they don’t have much of a say once their music is registered with a PRO.

Greg Musil, a Kansas attorney and former GOP congressional candidate, said he believes if the artists are being compensated, then anyone should be able to use the music for any purpose.

“If it’s unlawful, it’s one thing,” Musil said. “If it’s just artists complaining that they put it out there and someone they don’t like is using it to promote their campaign, I’m not very sympathetic to that. My understanding has always been that as long as you purchase the license, whoever you are, you have the right to use that music because you have paid the artist in order to use it.”

While it may seem like artists’ hands are tied once they sell their rights, they have some legal arrows, though flawed, to defend against the onslaught of politicians looking to appropriate their works for political gain.

One of those legal remedies may include a claim under their rights of publicity, but that varies from state to state. There is also the Lanham Act – which includes both trademark-like protections for artists if there is a confusion or dilution of their brand or trademarks and at least a possibility of recovery for false endorsement of the candidate.

But while these remedies provide artists with a possible avenue for litigation, none of them have been tested in courts. This lack of case law could be due to sheer costs — as artists would have to initiate individual lawsuits each time their music was used — or it could be a defensive tactic to ensure that no court establishes a precedent in favor of the politicians.

Either way, faced with a lack of alternatives, some artists have begun to speak up. One not so subtle example was the rather brilliant public service parody song that aired Sunday on Last Week Tonight with John Oliver.

In the absence of any established legal remedies, artists must rely on old-fashioned good will. Joyce Allegrucci said the Sebelius camp always played authorized music at campaign events because they understood the importance of having the artists on board.

“As we know, there are political figures who use music without permission. And in the mind of the artists, the music was not intended for the campaign of the person using it, nor is it what the artist intended for their brand,” Allegrucci said. “I don’t know if it was something she knew innately or something she learned from an artist friend, but [Kathleen Sebelius] always believed that you just don’t use music like that without permission, especially in a political venue.”

For its part, the PROs have complied with rights holders to help stop unpermitted uses of music. And there is some indication that change could be on the horizon. BMI’s VP of licensing, Mike Steinberg, recently told Forbes that it is going to re-examine its licensing before the next election cycle to determine if there is a solution that could benefit all parties.

But until sweeping changes are made to public performance rights, artists will have to either put their trust in politicians to seek permission before using their music, or plan to keep an attorney on retainer to enforce those rights.

— Have any thoughts of your own on using music in politics? If so, share with us by commenting below, emailing pdancalderon@gmail.com, or tweeting us @dansascity.