Sympathetic Vibrations | Proud to Be An Amexican 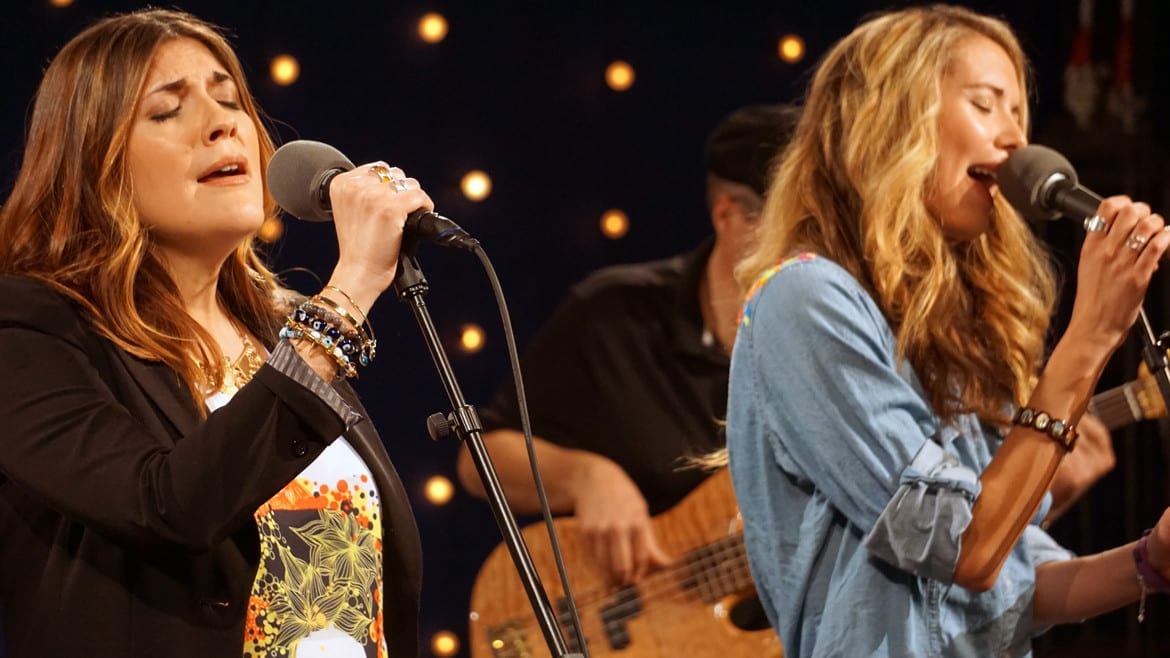 The Ceuvas sisters, Tess, right, and Maria, front Maria the Mexican. The band performed live in The Bridge studios in advance of its album release party for 'South of the Border Moonlight'. (Photo: Hilary Becker | KCPT)
Share this story

Maria and Tess Cuevas are dealing with deep-seated identity issues. Not to worry though, they are extremely well adjusted people and coping in maybe the best way possible — by making music that complements that precarious sense of self.

The Cuevas sisters front Maria the Mexican, a Topeka-based band celebrating the release of its sophomore album, “South of the Border Moonlight,” this week in Kansas City.

Trying to describe the band’s sound with any manner of brevity is nearly impossible. Their music floats among a host of genres, making it difficult to call them, well, anything in particular. Such is their complex. And, as is usually the case, the sisters owe this complex to their family and upbringing.

As granddaughters of mariachi music legend Teresa Cuevas, the Cuevas sisters’ gravitation toward music was all but predetermined.

Teresa Cuevas began studying and performing mariachi music at a very young age in Topeka, Kansas. She continued those studies until her adult years, where she formed what is widely considered to be the first all-female mariachi group in the United States, Mariachi Estrella. She and her fellow band members travelled throughout the country and south of the border to hone their sound and learn from the genre’s masters. That is, until 1981, when Mariachi Estrella was booked to play a show at the Hyatt Regency in downtown Kansas City on the very night of its infamous skywalk collapse that killed hundreds of hotel patrons. The band was on one of the walkways at the time of the collapse, and four of its members perished in the tragedy. Miraculously, Cuevas was pulled from the rubble and survived. Thereafter, she set out to teach mariachi music to the next generation – most notably her granddaughters.

Teresa Cuevas died in 2014, but Maria and Tess Cuevas credit their grandmother’s legacy with the talents they have developed as musicians and performers. And the two were certainly blessed to have the encouragement and guidance of one of the genre’s pioneers throughout the beginning of their career.

“I doubt that we would have played music without her,” Tess Cuevas said. “We kind of came out of the womb with the understanding that we would learn an instrument and play her mariachi, and she was definitely the reason we got started.”

The Cuevas sisters began playing music at age six, receiving classical training at first – Tess on violin and Maria on piano and eventually guitar. They each respectively started playing mariachi music around age 11, when they joined their grandmother’s band. And they continued their education in the techniques and traditions of mariachi music for almost ten years under their grandmother’s tutelage.

But in many ways, the Cuevas sisters were caught between two worlds. The unfortunate trend among Latino immigrants and their descendants at the time was to force their children to assimilate to American culture.

“They were faced with discrimination and they were a Mexican family around a lot of white people, so they discouraged their children to speak Spanish,” Maria Cuevas said. “Our grandmother would teach us how to pronounce [in Spanish] and how to sing in it, but it wasn’t until we were older that we learned the language. So there was a bit of an identity conflict that we went through and still experience from time to time.”

And this conflict is certainly at play in their music, as there is an almost constant jostling between their Mexican heritage and American influences. Sure, “South” has the expected undertone of their mariachi music upbringing – made evident in chord structures, instrumentation, and the few of the tracks with Spanish lyrics. But the bulk of the album bounces around among folk, rock, blues, soul, and even some dashes of country. It can seem a bit disjointed at times, but garners a sense of continuity from the sisters’ vocal harmonies throughout, which are consistently solid across both languages.

More importantly, the album gave the sisters an opportunity to showcase a confidence in their musicianship and strive for a level of faithfulness to their sound that may have been lost in their debut effort, “Moon Colored Jade”.

“On our first album we worked with a sound engineer that was really into production,” Maria Cuevas said. “This album is a little more reflective of how we truly sound when we perform live. And it’s just a little bit more rootsy. Our authenticity was able to shine more through the music.”

The fusion of sounds is certainly a strength, and it has opened the band up to the possibility that its brand of music may do well outside of U.S. borders. The band recently road tested some of the new material in Mexico at the San Pancho Music Festival, where the mix of sounds was well received.

“When we were in Mexico, we got a lot of positive feedback and interest in [our music]. And I think that has a lot to do with the fact that we’re this hybrid of music and as a band,” Maria Cuevas said.

Maria the Mexican celebrates the official release of “South of the Border Moonlight” tomorrow, with a 90.9 The Bridge Presents party at the VooDoo Lounge, followed by a slew of CD release parties in Topeka, Lawrence, and St. Joseph before returning to KC in April for a slot at Knuckleheads.

Have any thoughts of your own on Maria the Mexican’s new album? Share them with us by commenting below, emailing pdancalderon@gmail.com, or tweeting us @dansascity.