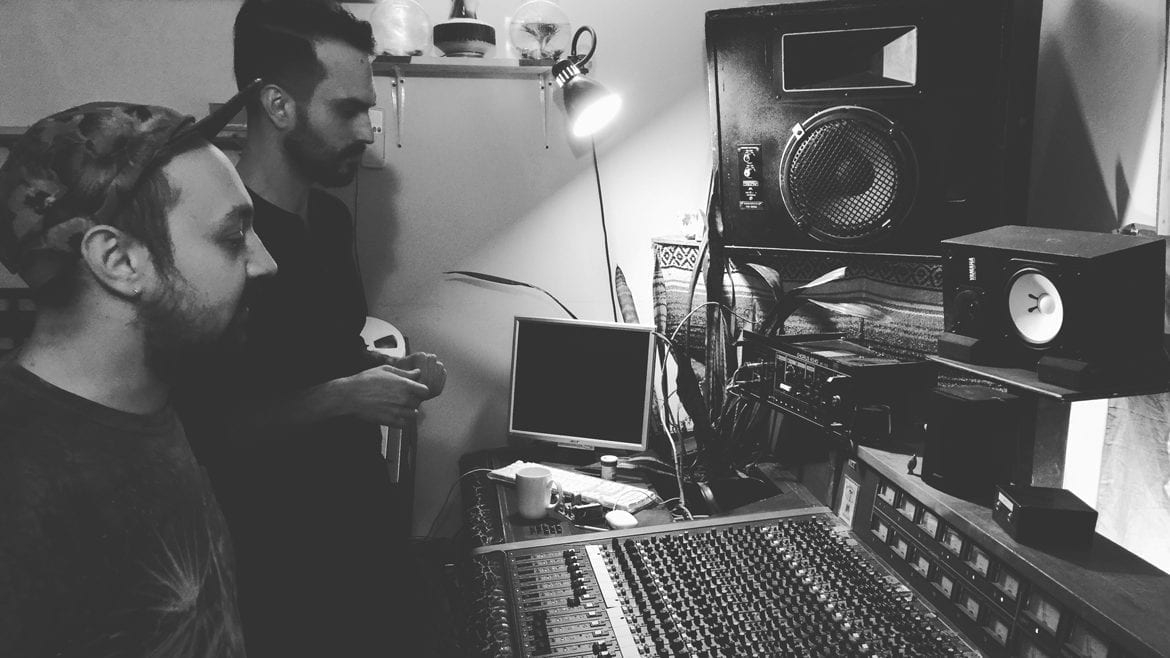 Andrija Tokic, left, and local songwriter Andrew Foshee listen to their mix at the Bomb Shelter recording studio in Nashville, Tennessee. Foshee will celebrate the release of his full-length LP, "Strange Relations" this weekend. (Andrew Foshee)
Share this story

This weekend will cap the end of a remarkable journey for one of Kansas City’s independent solo artists when Andrew Foshee celebrates the release of his first full-length LP, “Strange Relations,” Friday at the recordBar.

Foshee’s album is every bit a local release success. The limited physical pressing sold out and the record made a few of the area’s “best of” lists – riding on the lush and layered alt-country atmospherics and downright earworminess of Foshee’s songwriting.

And while independent releases are not uncommon in these parts, Foshee’s particular experience is something of a dream realized for many solo artists. Here’s how he did it:

Fill Up Some Hard Drives

Foshee’s experience self-recording helped him gain proficiency in both the recording process and in experimenting with instrumentation. But he admits that a big benefit of solo recording is spontaneity.

“It’s always difficult to get a bunch of music people in the same room,” Foshee said. “Everyone has different schedules, different levels of commitment and different passions. So it became a necessity for me to develop a master of none, player of many, approach.”

In doing so, Foshee amassed what he described as multiple hard drives full of songs that had varying levels of completeness. In 2016, he decided to pick some of his favorites and try to give them the studio treatment.

Scrounge Together a Respectable Budget

In late 2016, Foshee began the process of reaching out to producers. And though many of them were willing to talk to him, often their costs for tracking his record were way out of his budget.

That’s because as a solo artist, Foshee would have to rely heavily on expensive session players in the studio. He considered going the crowdfunding route, but ultimately determined it didn’t feel right – partly because he felt like he needed to earn fan support with a solid product first.

Instead, he put his own assets on the line, sold off some instruments, and borrowed money from friends to get his capital together. From there it was about making every cent stretch as far as possible. “If there’s one thing I’ve learned about trying to communicate with anyone in the music industry,” Foshee said, “it’s that no one wants to read or return emails.” Foshee celebrates the release of his debut full-length LP this weekend with a show at recordBar. (Photo: Charles Steven)

Get a Genius to Love Your Work

Foshee was set on finding a producer that would be the right fit for his style of record. In doing so, he came to admire the work of Andrija Tokic, a Nashville producer from The Bomb Shelter studio, who helmed critically acclaimed albums for acts like Alabama Shakes, Benjamin Booker, and Hurray for the Riff Raff.

“I wrote a short email and included my music in an accessible streaming format, but I made sure I was as clear and concise as possible,” Foshee said. “If there’s one thing I’ve learned about trying to communicate with anyone in the music industry, it’s that no one wants to read or return emails.”

Fortunately, he received an enthusiastic response the very next day. And over the next few months, Tokic used Foshee’s budget and mapped out a very precise recording plan with allotments for both studio time and the costs of session musicians. Then it was time to record.

In helping realize fleshed-out, studio versions of the Foshee’s demos, Tokic had a certain set of session players in mind – none of whom Foshee had ever met. And allowing strangers to put their hands on something as personal as your art requires a certain level of trust.

Fortunately for Foshee, much of those fears were allayed on Day One of recording.

“When I walked in, they were excited about the music and already knew the songs really well,” Foshee said. “So the nuance was already there and they were helping me create more nuance.” Andrija Tokic mixes down one of Foshee’s tracks in the studio. Tokic, who works at The Bomb Shelter recording studio in Nashville, Tennessee, helped Foshee stretch his budget as far as possible. (Contributed: Andrew Foshee)

As a group, Tokic, Foshee and the session musicians would sit in the control room, listen to a demo for a track, share some ideas, then head straight into the tracking room to get it down. And to Foshee’s surprise, many of the tracks that were released on the album were recorded within the first few takes.

Dance With the One Who Brought You

By August of last year, after months of mixing and mastering, Foshee had a finished product. And many of the people involved thought the record had the potential to go places. In fact, the feedback he received from industry vets was so positive that Foshee thought it might land him a record deal. He even considered moving to Nashville.

But after a few labels in Nashville and KC gave the album a soft pass, Foshee grew impatient and began to question whether having a label involved was necessary at all.

“What is a label? In the sense of a small independent label, they’re just helping you press a record and you’re paying them back,” Foshee said. “And unless you sign with a big label that has a network and foundation, it’s really just a credit card. So one night, I bought the rights to the album cover and then went on TuneCore to set a date and release it myself.”

The album was originally released in October of last year, but Foshee hasn’t been able to have a proper release show until this week – mainly because he didn’t have a band to help him promote it. But after teaming up with other local musicians, he’s looking forward to this weekend as an opportunity to showcase the album in a live setting.

And with a solid record in the bag, a head of steam for promoting his work and the industry knowledge he’s gained in the process, the entire experience has made it a lot easier to do-it-himself in the future.