Sympathetic Vibrations | Your Guide to the Bottom of the Bill

Here's Why the Bands in Small Print Matter at MOTM 2016 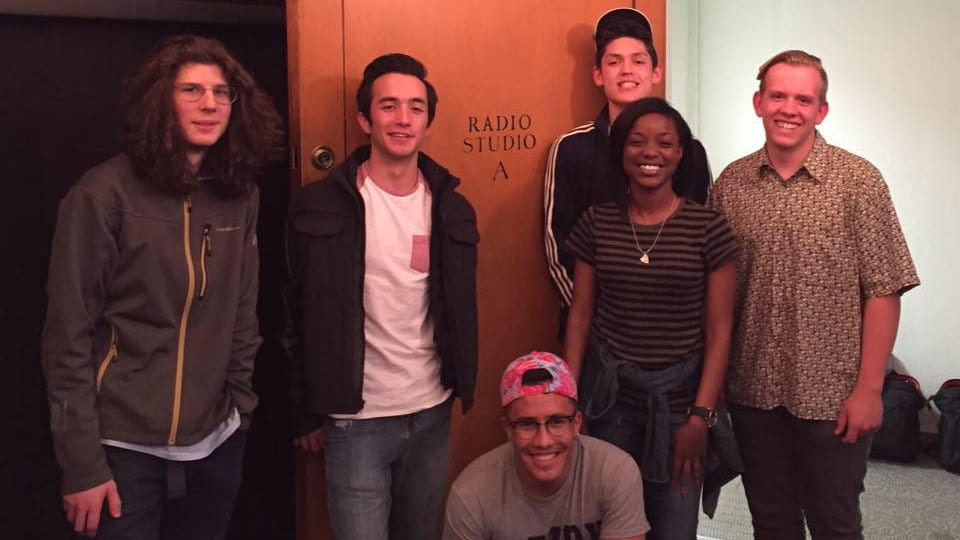 Theta Intellect, high schoolers from Kansas City's Lincoln Prep, earned a spot on the Middle of the Map lineup after winning a local Teen Battle of the Bands. (Sarah Bradshaw | The Bridge)
Share this story

Yesterday kicked off the music leg of Kansas City’s sixth-annual Middle of the Map Fest, a music, film and forum festival that bears a not-so-coincidental resemblance to Austin’s South by Southwest.

The two-week fest is something of a crown jewel for Kansas City’s arts scene, showcasing more than 25 films and 100 bands throughout 11 venues in Westport, the Crossroads and Downtown.

Of course, this is hardly news. Much has been said in local media about Fred Armisen’s talk last weekend and the upcoming performances by big names such as Charles Bradley, Aimee Mann, Vince Staples, Manchester Orchestra, and the Cold War Kids.

But if you work your way below these big names, way down on the festival’s poster, you’ll find its unsung heroes — the band names at the bottom of the bill.

Bottom-of-the-billers have a rough go of it at any festival, and Middle is no different. They get the fine-print treatment on promotional materials and are relegated to the opening sets in most venues.

So if your festival plan for the weekend includes happy hour pre-gaming with your buddies or laying down a food base before the onslaught of festival beer, more power to you. But while you’re doing that, these proud bands may already be sweating it out on stage — playing to smaller, sober crowds who may be there only because their phones are dead or they haven’t figured out how to be cool-late to a show yet.

That’s a shame because the talent and diversity of Middle’s roster is evident in every one of the bands selected — all the way down to our intrepid bottom-of-the-billers. More importantly, you may find that the only thing separating the little names on the poster from the big ones is a few years of touring and a few more album units sold.

So if you make a habit of sleeping on these bands, you may just end up missing a great “before they were big” opportunity.

In this spirit, here’s Flatland’s recommended bottom-of-the-billers for Middle’s Friday and Saturday lineups. Take a look. You may just find something that warrants an earlier dinner reservation:

Theta is a group composed of Kansas City high school students from Lincoln College Prep that won a spot at Middle after getting the unanimous nod from the panel of judges at the Nelson-Atkin’s Middle of the Map Teen Battle of the Bands. That feat alone is certainly worthy of praise, but it’s even more amazing considering the victory happened a measly three and a half weeks after the band initially formed. Theta’s music is a fusion of jazz, R&B, and hip-hop that you have to experience to really understand.

Check them out if you like: Hip-hop fusion and jazz

St. Joseph, Missouri, does not have any oceans, but Dreamgirl didn’t seem to notice. It plays a beachey pop music that is somehow both atmospheric and remarkably upbeat at the same time. And its effects-laden instrumentation and surf rock tenor produce a dreamy and gratifying concoction of melodies. The cherry atop this boardwalk sundae is lead singer Lacey Austin, whose velvety vocals are worth the price of admission alone.

Check them out if you like: Reverb-heavy surf pop

Kansas City-based Tall Tales formed in 2014 and plays an indie pop that draws from alt, new wave and punk. Its debut EP was released in May 2015, and its live shows are high-energy — emboldened by the catchy hooks delivered by baby-faced lead singer/keyboardist Jack Ingram.

Check them out if you like: Radio-friendly, punk-inspired pop rock.

John Velghe & The Prodigal Sons – 7 p.m. at the Midland

Kansas City’s John Velghe and his band, the Prodigal Sons, are currently between projects (the band’s last album, “Organ Donor Blues,” was released in June 2014). Velghe’s music is quintessentially Americana, touching on elements of rock, country, jazz and pop. The group has a tight, expansive sound, including horns and keys, and clearly draws a lot of influence from Alejandro Escovedo, with whom Velghe has frequently collaborated.

Check them out if you like: Americana-inspired rock music

Los Angeles-based Fake Drugs is touring its most recent release, “Glass Eyes,” a strong synth-pop record employing the kind of up-tempo, moody romps that made Joy Division and Echo & the Bunnymen famous. The band also features Keil Corcoran, drummer of STRFKR, who will be headlining at the Record Bar Pop-Up on Saturday.

Check them out if you like: Dark, synth-heavy, electro-pop

— Know of any other bottom-of-the-bill bands to check out? Have you seen any of these bands live? If so, share with us by commenting below, emailing pdancalderon@gmail.com, or tweeting us @dansascity.