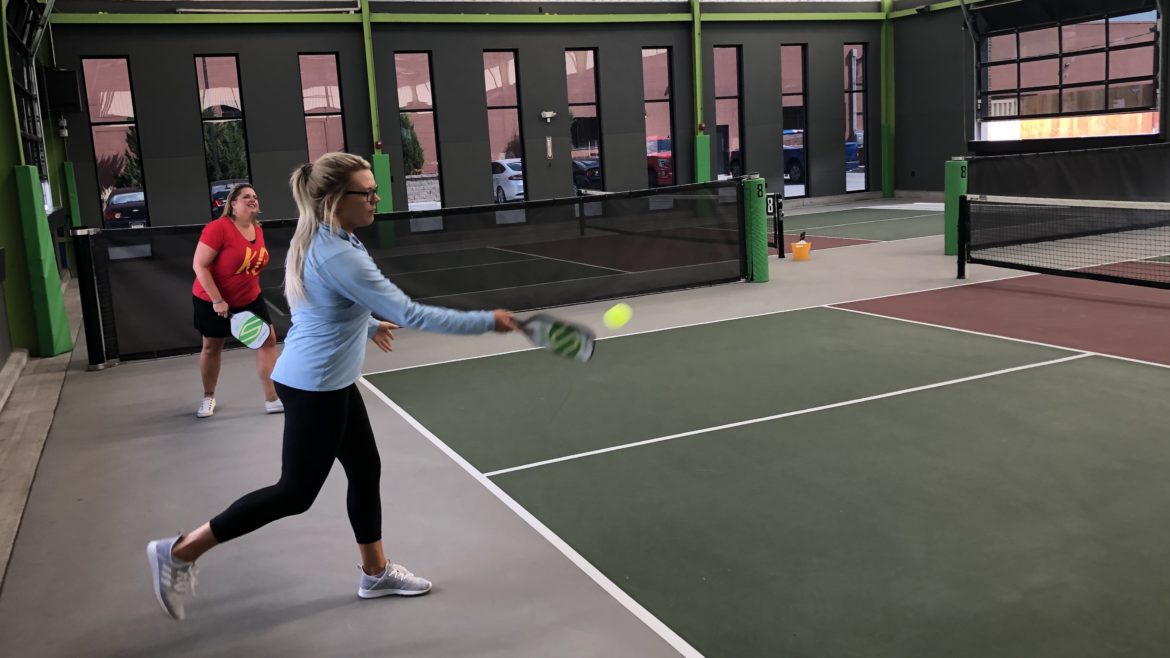 It’s 2 p.m. on a Wednesday in North Kansas City.

Summer’s tail end brushes the heartland with what feels like an overdue 90-degree day. The streets are mostly quiet. Aside from a few late lunch goers getting back to work, the only noise is coming from Chicken N Pickle.

Inside the North Kansas City restaurant and entertainment complex with a catchy name, Queen’s “We Will Rock You” is accompanied by the squeaking of tennis shoes, competitive banter and the constant pop of a balls off wood.

And how could you not have a good time? It’s pickleball.

Dubbed “the fastest growing sport in America” by the USA Pickleball Association (USAPA), Pickleball has come a long way since it was invented on a Saturday afternoon in Washington state back in 1965.

The game’s played on a micro tennis court with wooden racquetball paddle-sized ping pong paddles and a bright yellow ball. A few rules only slightly differ from those of tennis or ping pong, as players volley the plastic ball back and forth, only able to score while on serve. The game is played to 11, you must win by two.

Something about pickleball is catching on. In April, NBC News reported that USAPA watched its numbers grow 650% over the last six years. The game’s growth can be seen across KC.

As pickleball courts pop up in parks and community centers, the sport is also shaking its reputation as a game from grannies and grandpas and is going where only its racket sport cousin ping pong has gone before. Both Chicken N Pickle and a similar concept, Pickle Bar + Kitchen, have announced plans to open new locations in Overland Park on the Kansas side.

Pickleball is going to the bars.

Chicken N Pickle welcomes players of any skill level to participate in weekly leagues, tournaments or in open play sessions that range in competitiveness, with eating and drinking as an option. Shinn says pickleball’s growing popularity as a social sport has kept his staff hopping over the last few months.

“You can come out here and drink and play, you can literally just sit there and watch and you can still have fun,” he says. “They’ll stay here for hours and hours and they’ve never played before in their life.”

Take Alex Render, who despite full-on diving for a short volley on court No. 7, describes herself as only a social pickleball player. She’s at Chicken N Pickle on a workday with members of her young company, a staffing startup in looking for a team building activity – along with a few drinks.

Render says she first tried pickleball on a whim and played a handful of times before pitching the idea to her coworkers.

“I’m like, ‘It’s a mix between racquetball, tennis, all sorts of things’,” Render explains. “Anyone can really play. It’s a fun environment.”

As the group’s homemade tournament bracket narrows to the final matchup of the day, empty glasses sit scattered on the high tables that line the courts. There’s occasional heckling and applause from the peanut gallery along with frequent rule clarifications.

“I played the other day for an hour and 45 minutes and we burned 650 calories,” says the startup’s CEO Brian Cleary, catching his breath before facing off against Render in the office championship game. “I hate the treadmill, so I gotta chase the ball around.”

The boss isn’t the only one huffing and puffing. Pickleball is a workout. While playing doubles eliminates some of the side-to-side motion, picklball’s smaller court calls for shorter, sharper cuts than in tennis. The plastic ball falls faster than shuttlecock.

Cleary, like Render, brings just a bit of experience in pickleball to the office showdown. A recent transplant from Texas, Cleary discovered the sport and hopped onboard. Now he’s getting exactly what he wants out of pickleball.

“I heard about the fever of it, so I started playing,” says Cleary. “It’s a good way to socialize and a fun way to exercise.”

All in the Game for Steve Sanders