Ballin’ in The Club 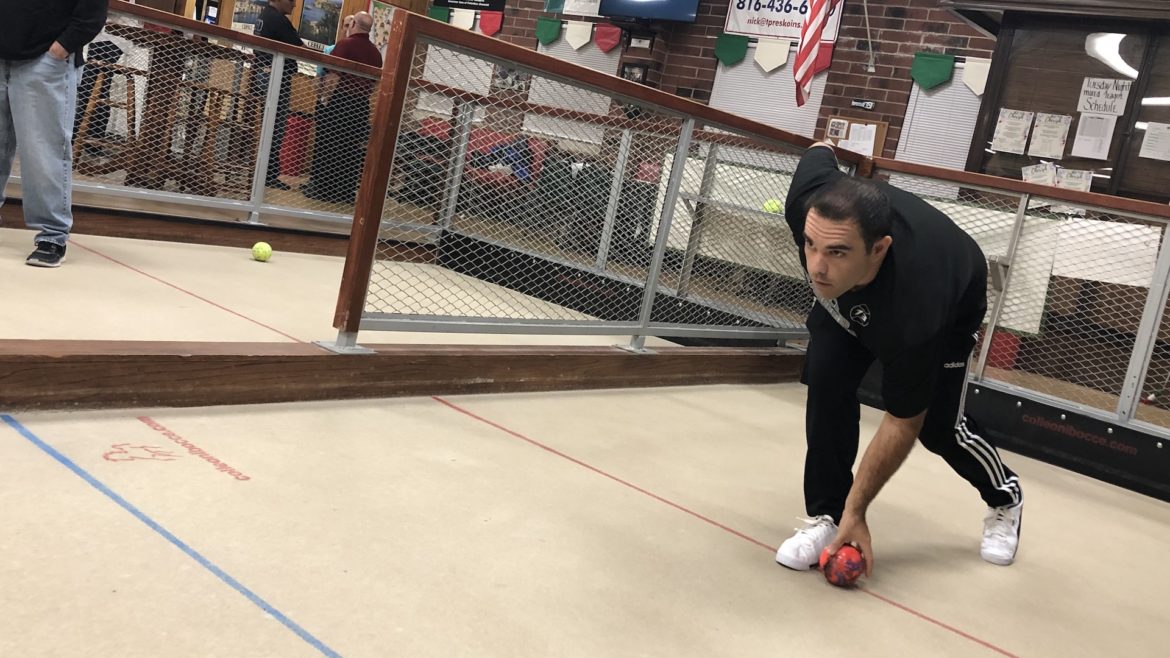 For the first time in weeks, the parking lot at 2415 Independence Ave. is full of cars.

Running a bit late, John Liberto passes under the red, white and green awning that reads MEMBERS ONLY and enters the American Sons of Columbus social club.

He’s welcomed by the smell of cigars, handshakes, kisses and signed checks. The room hums with conversation. The walls are adorned floor to ceiling with smiling photographs of proud Italians of Kansas City’s past.

Bocce season is back.

Liberto is just in time for the night’s opening slate of men’s league games. As he makes his rounds collecting dues as league commissioner and president of ‘The Club’, teams of four-to-six stand at opposite ends of four long and perfectly flat bocce courts, rolling balls back and forth with fine touch.

They are trying to outscore the opposing team by rolling their balls as close to the pallino, or the small ball, as possible.

Not a lot has changed since Liberto, 36, joined The Club as a second-generation member 21 years ago. The rows of benches remain, where he sat by the wayside as a teenager and watched as old guys like “Fatty” Cervello or Mr. Palazola heckled one another during impromptu Saturday afternoon bocce matches. There are still thick accents telling the balls where to roll and when to stop.

The only difference is that today Liberto runs the show, and oftentimes the courts.

“The cool part about it is you don’t have to be Michael Jordan or Patrick Mahomes in order to play bocce,” says Liberto, who knows a little bit about being great at his sport. Along with fellow club member Chris Cardello, Liberto won the 2017 United States Bocce Federation (USBF) National Championship and represented the country at the world games in Poland.

“It’s really not terribly hard,” he reiterates. “It only takes two things, your aim and your speed to control your game.”

Abiding by USBF rules, The Club opens its doors on Tuesday, Wednesday and Thursday nights to mixed, women’s and men’s leagues, respectively. And although a majority of the bocce players are of Italian heritage, and many have multi-generational roots as members of The Club, there’s good news for for anyone without sugu running through their veins.

“You don’t have to be Italian,” says Gino Corte, who joined the club as a young man, not long after he immigrated from Sicily in 1961. “It’s an Italian game, but it’s not an Italian deal. You got two good arms and you got good eyes, you can play.”

On night one of the quest for the league championship jackets, first-timer Clay Roth enters with two goals in mind: Don’t lose 30-0 in three games and socialize.

“I know we aren’t going to be super competitive since this is our first time, but it’s more like a Thursday night to hang out with the guys and meet some new people,” says Roth, who is admittedly not Italian, as if his German last name didn’t give it away.

He scans the room and its family-like camaraderie.

“They welcomed me with open arms,” Roth says. “There’s a ton of tradition. You got some guys here that I’ve met that are over 80 years old and some young guys too. It’s definitely a neat deal.”

Liberto says the league filled up this year. Its 20 teams roll out players of all ages — some who joined Corte in The Club’s early days, others who are like Liberto once was, young and eager to carry on tradition.

The game, which is tactically similar to curling, can certainly become competitive and quietly captivating. But like many of the games covered in the SportsTown series, Italy’s second most popular sport is built on a strong sense of community. So strong, in fact, that throughout history both state and church officials have at one point or another banned bocce, claiming it stole attention from war efforts and led to gambling.

“If you’re banning a game because the people are having too much fun, I think you’re onto something good,” says Liberto.

“Friendship,” Corte gives his best guess as to why bocce at The Club has withstood the test of time. “It’s about seeing everybody, they can’t wait until tonight.”

Corte, now well into his 70s and a former president of The Club, moves through the large crowded room with obvious joy. He steps onto the state-of-the-art court (which was imported from Milan) and squats low with a ball in hand before rolling it within a foot of his target.

Then, he watches Roth’s teammate, also a first-timer, roll his own ball.

“That was a pretty good shot.”

The Filter Ep. 2: 'Alone Together'

We Talk Race, Politics and the Pandemic

The ‘Other’ Opera Stars