Getting Swept Away With Curling in Kansas City

Devotees Liken It To Shuffleboard On Ice 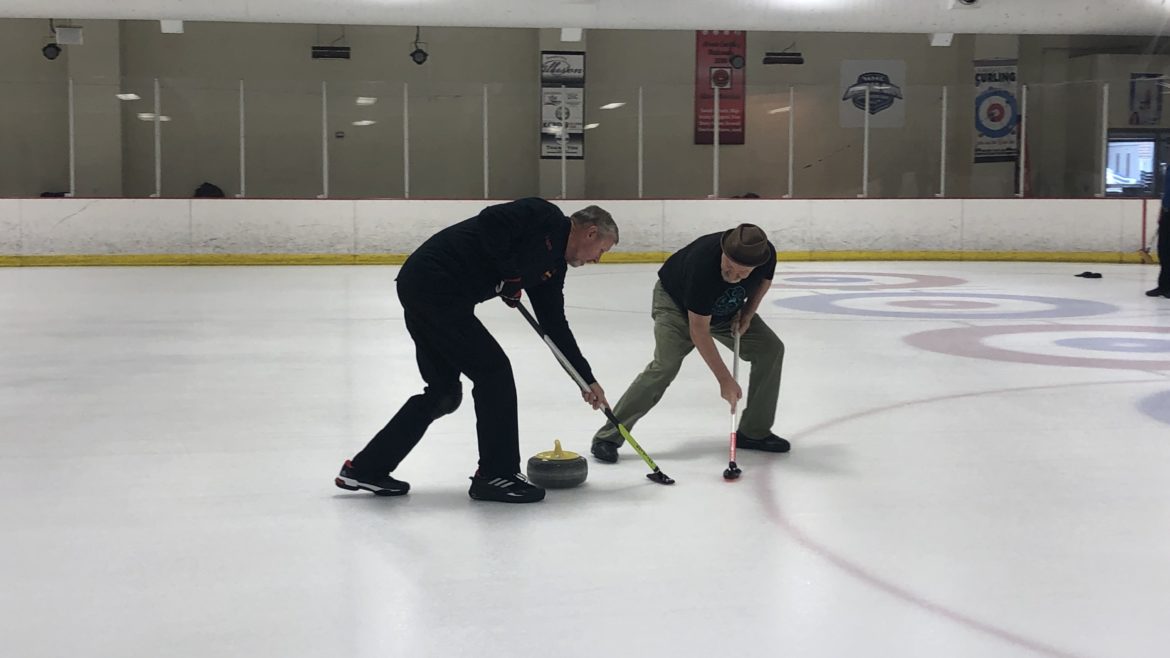 The Zamboni machine serves its purpose and chugs off of the Line Creek Community Center’s ice and into its snug garage.

The rink’s ice is now ready, though it’s a long way from Sochi’s glistening sheets back in 2014 or the Gangneung Curling Centre four years later in PyeongChang.

The world most definitely is not watching. Olympic rings are not painted on this ice. In fact, even the dedicated curling lines are bit faded under the utility ice, located just 15 minutes north of downtown Kansas City.

All things considered, though, it is good curling. It always is for the two dozen or so Sunday morning fall league members, who take the ice promptly at 8:45 a.m. and then pair handshakes with the reminder.

“All I can tell people is to come out and try it and see what they think after that,” says J. Micheal Wimpy, a member of the Kansas City Curling Club since 2014. “They say it’s easy to learn, but impossible to master and that is absolutely true.”

Wimpy was captivated when the world’s very best curlers battled for gold at the Sochi games. He punched his budding curiosity into Google search and out came the Kansas City Curling Club.

He’d never played the game, but thought it looked like fun. Wimpy considers himself an introverted loner, but saw the club as a chance to socialize.

Members of eight teams push the 40-pound stones back and forth, up and down the ice. They try to perfectly deliver the large tea-kettle-looking rock into “the house” — or as close to the painted “bullseye” as possible. Any of your team’s stones that are closer to the center than your opponent’s closest stone earn points.

It’s a little like bocce and a lot like shuffleboard — except it’s on ice. And then there’s the sweeping.

“Sweep hard!” Wimpy shouts to a few of his teammates who shuffle alongside the stone.

“What I didn’t expect was how vigorous it is, especially if you’re sweeping,” says Wimpy. “I’ve lost about 40 pounds — I don’t know if it’s all from curling, but it certainly has something to do with it.”

Sweeping the ice in the path of the sliding stone ensures an accurate delivery. It also prevents the stone from slowing. It seems trivial and looks sort of funny, but it’s essential in a sport that requires nothing short of perfect touch.

“There’s all kinds of different things, because you’re looking at angles, you’re looking at various things — strategy, or three curls ahead to think, ‘If I do this, will the other team do this?’ Everyone is reading the ice from their different perspectives,” Wimpy adds.

During the PyeongChang Olympic games in 2018, Barrie stayed up into the early hours of the morning to watch curling live from the other side of the globe, much like Wimpy did four years prior. That’s when Barrie noticed something.

Unable to play physical sports like football or basketball due to a knee condition called Sinding-Larsen-Johansson syndrome, Barrie watched the curlers take their starting positions on the foothold devices, before pushing off in a low-gliding lunge to deliver the stone.

The position mimics a stretch that Barrie uses to manage issues with soreness and mobility in his knees.

Curling suddenly became the perfect sport for the eighth grader, according to Barrie’s mom Leah. She’s thrilled that her son has found a sport that is both physically and intellectually fitting.

“Well, the professionals make it look a lot easier,” James Barrie admits. “When I first tried it, it was kind of hard. I didn’t know what to do. I eventually learned how to do everything and now I’m pretty okay with it.”

James Barrie picked up curling and is now onto the long chase of mastering the sport alongside his senior of multiple decades, Wimpy.

“He’s like my coach kind of, he’s always on my team,” James Barrie explains. “Mike [Wimpy] has taught me a lot of the things that I know, like if I accidentally break a rule he will teach me about it or every time I mess up on something.”

The unlikely pair recently placed near the top of Kansas City’s annual international curling tournament – and that just may be the tip of the iceberg for Barrie. His sights are now set on earning a college scholarship and Wimpy believes in him.

“Just to see James do so well and Mike supporting him and helping him and taking him under his wing — curling is just great,” says Leah Barrie, who doesn’t miss a match. “It’s an amazing sport.”

So when the 2022 Beijing games roll around and hundreds turn out to the club’s especially crowded quadrennial “Learn to Curl” sessions, keep an eye out for James Barrie. He’s taken a bit of advice from his friend Wimpy.

“It definitely takes a long time to get good at it,” James Barrie says. “You can’t just play one league and say you’re better than everyone else because I’ve played for around two years. And there are still a lot of people that are way more experienced than I am because they’ve played for nine or 10 years — don’t quit.”

Take it from young Barrie, he was born to curl.