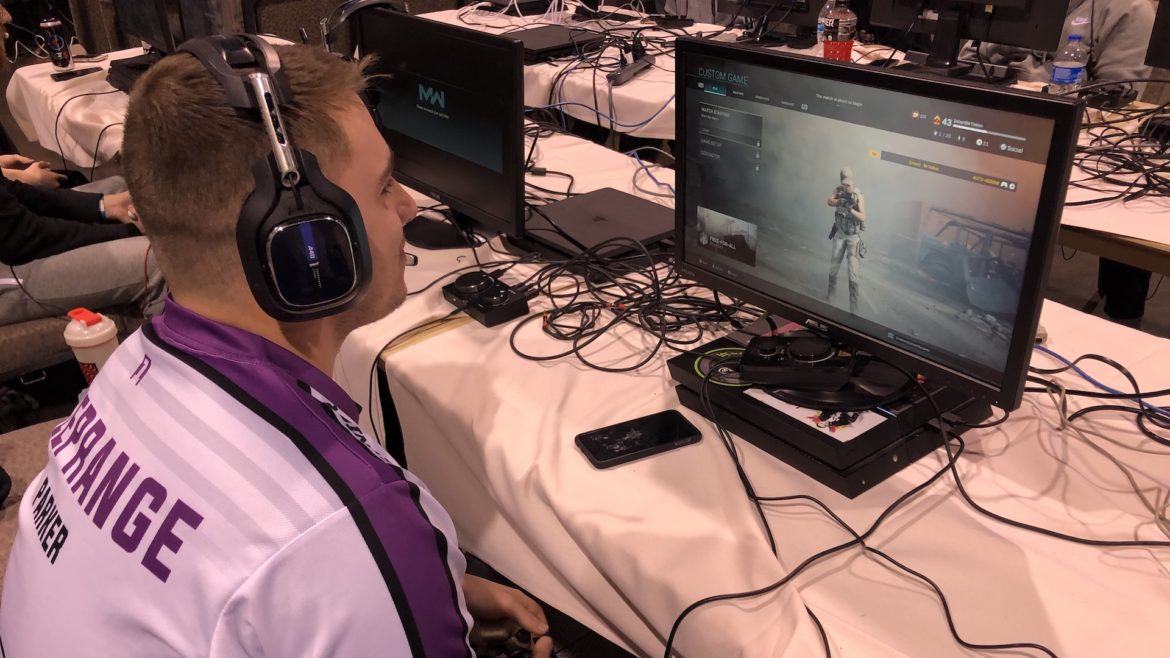 Video games have come a long way since the days of sitting cross-legged in front of a tube TV, holding a cabled controller and staring into the pixelated world of Duck Hunt or Super Mario Bros.

Gaming has come a long way even since the once mind-blowing introduction of the wireless Nintendo Wii controllers and the original online Xbox Live craze.

According to Business Insider’s Esports Ecosystem Report 2020, the industry is on pace to surpass $1.5 billion in revenue by 2023. It is a skyrocketing no-longer-niche industry driven by technology breakthroughs that has gamers, investors — even entire cities — scrambling to get their slice of the virtual pie.

“This is pretty big for us. We have a little bit of everything going on,” says Kansas City Esports Operations Director Jeff Wilson.

He surveys Overland Park Convention Center’s Exhibition Hall B with a slight smile as gamers and cosplay enthusiasts of all ages take in Day 2 of the Kansas City Esports Expo last weekend.

The first gathering of its kind in Kansas City is a gamer’s paradise, offering tournament and freeplay sessions for popular console and PC games like Fortnite, Call of Duty, Super Smash Bros., Street Fighter and Mario Cart, among others.

There’s a snack bar, plenty of prizes, even local colleges and universities tabling to show off their own esports programs. You just never know when you can score a scholarship.

Take Ninja, who is largely considered the world’s most popular esports star. Before he recently cut ties with the streaming giant, Ninja doubled Twitch’s No. 2 most-followed streamer with 14,714,093 followers. He also, like modern gaming altogether, often crosses cultural lines, playing alongside celebrities like Drake or various professional athletes.

“I feel like Ninja gave it a huge boost, making millions off Twitch,” says Tevin Platt, who is volunteering with KC Esports, running a virtual reality game at the expo called Beat Saber, a cross of sorts between Guitar Hero and Star Wars.

Platt, whose Twitch viewership is admittedly in the single digits, says that one thing people get wrong about esports is that it’s a waste of time.

“Depends on the player, sometimes it could be,” says Kaleb Brooks, who estimates that he spends more than 40 hours a week gaming, despite a full-time job managing a grocery store.

Brooks made the trip to Overland Park’s expo from his home in the Ozarks to compete in the five-on-five Call of Duty tournament with a few friends from around the Midwest that he’s met at other regional tournaments.

The goal is to win the tournament’s prize money, which helps legitimize the countless hours with controller in hand, according to both Brooks and Platt.

“I don’t know if you want to say ‘sport’ – it depends on who you ask. But it does take skill. It’s a certain type of thing that people could be good at,” Brooks says. “And it’s not necessarily just people who can’t be fit or whatever. Anyone can hop on there and play.”

A multi-sport athlete in high school, Brooks enjoys the competitive nature of gaming. Watching his team, seated at a row of monitors, leaning into the action and barking strategy at one another, it’s clear there’s more to competitive gaming than what meets the eye.

“It’s just like a normal sport, like football where you have your quarterback and everything,” he explains. “You have roles in Call of Duty – you have your two ARs, a ‘flex’ and a ‘sub’. Everybody plays their roles.”

If gaming terminology flies over your head, the draw may be best boiled down to the spirit of competition and comradery.

“When you’re playing, everyone is shouting at each other and it gets competitive. But when you get done you congratulate each other and everyone gets along,” Brooks says.

“Not every kid is an athletic kid and there used to be that division,” says Wilson, who’s watched the esports cultural evolution from his garage. “But now parents see that this has become a legit thing and if their kid is into it, it’s OK.”

Self-described as “one of those garage people”, Wilson started an internet cafe-like space called Novastar Gaming out of his Kansas City garage in 2015. Not long after, Wilson teamed up with grassroots esports tournament organizer Gabriel Munoz to form KC Esports.

The group now has a permanent home at Hy-Vee Arena, where gamers come together to train, play tournaments, or socialize around top-of-the-line equipment and high-speed internet, of course.

As far as Wilson is concerned, the groundwork for a professional esports team in Kansas City is being laid. In his view, it might just be investors’ interest away from joining cities like Los Angeles, Atlanta or Boston in the pro gaming realm.

Wilson’s confidence is backed by a spike in esports investment from $490 million in 2017 to $4.5 billion in 2018 — significantly more than the revenue the industry is expected to generate for years to come.

“The community in Kansas City, it’s there —  it’s just everywhere,” explains Wilson. “It’s just a matter of organizing it. There are some groups out there, but we hope to be the group that brings it all together.”

This article is a part of Flatland’s SportsTown Series: A collection of stories covering the average athletes, niche-sport elites and everyone else dedicated to the games you’ve never heard of, could easily be a part of, and just might want to love that make Kansas City truly a one-of-a-kind sports town.

Getting Swept Away With Curling in Kansas City

Devotees Liken It To Shuffleboard On Ice