Backyards to Big Time: The Cornhole Craze in Kansas City 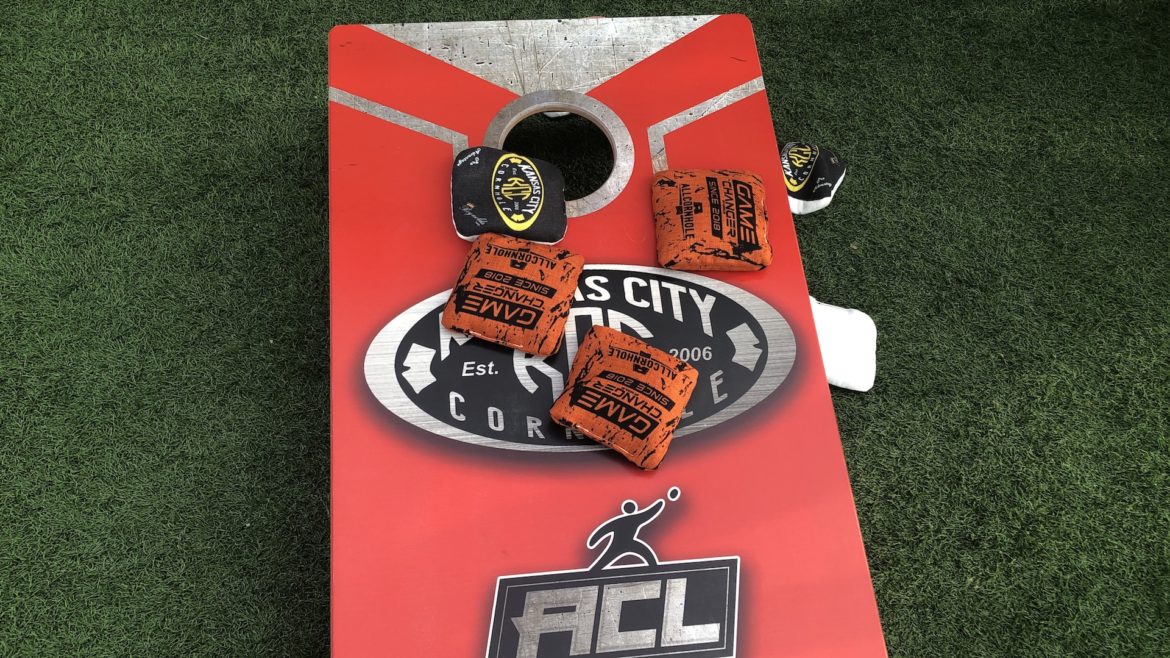 Nearly two dozen grown men walk into a bar. They go straight to the back patio, empty bean bags from their backpacks and get to tossing.

Back and forth. Underhand. If you toss a bag and it lands on the slanted board 27 feet away, and it remains on the board after all eight bags are thrown, that’s one point. If a bag is thrown through the hole in the board, that’s three points. Game to 21.

“We used to just play in the backyard once a year at a family barbecue and decided to give it a try,” Jay says over a chorus of thuds and banter.

“I’d watch some of these guys, they never miss,” Jim adds. “They’re not even doing it to throw it in the hole. The guys last week were shooting pool.”

Founded in 2006, Kansas City Cornhole existed quietly until recently, when the sport half-hilariously was thrust into the niche-sports spotlight. The club currently offers seven weekly leagues across the metro for players of any skill level and has plans to add more.

“The game has just exploded,” Kansas City Cornhole President Mark Isley says. “The great part about the game is that anybody can play it. You’ve got people who have 10 grandkids out here playing. Male, female, any age — cornhole doesn’t discriminate. You don’t have to be in great shape to play it, you can have a beer in your hand — or not.”

Leavenworth, Kansas, native Scott Watkins doesn’t drink while playing — it’s just not for him. Since he started playing cornhole competitively just one year ago, Watkins has discovered he’s pretty good at the game.

He’s one of the guys who’s impressed the Modlin brothers by hardly missing. Misses are in fact so infrequent for Watkins that he recently signed his first professional cornhole contract.

“It’s real competitive, more competitive than you would think,” Watkins says, before disclosing that he does not plan to quit his day job in construction now that he’s a professional athlete.

He’s one of eight players from the ACL Midwest conference (players from Kansas, Missouri, Nebraska and Iowa) who will compete professionally starting in January.

So it’s more than just tossing a bag out there?

Two weeks into officially competing, the Modlin bros — or ‘The Shams’ — fully embrace all things cornhole. Jay’s backpack is full of three new sets of bags, each set of four a slightly different texture than the next, designed to either slide or stick on the board. Which type of bag to throw might depend on the weather, which side of the bag depends on your strategy.

“One side is a slicker side and the other side is the slower side, so if you throw a flat bag like a pancake through the air, you can kind of dictate how the bag maneuvers on the board,” Isley explains. “If you want to block the hole, you’ll throw the stickier side down. If you want to slide the bag to the hole, you throw the faster side that’s going to slide a little more.”

His simple advice to beginners wanting to take their game to the next level? Throw the bag flat.

Jay Modlin opened the pair’s first game of the night hot, hitting back-to-back three-pointers on two perfect throws. The Modlins went on to win the game decidedly, improving their league record to 5-6.

Next up? A duo featuring the new pro Scott Watkins.

“Every week we are getting better,” Jay Modlin says, encouraged.

“I’d never practiced,” brother Jim adds. “Now I’ve got the boards out at home and about an hour everyday I go home and practice.”

“The neighbors think I’m nuts. Whatever.”